The Oil and Natural Gas Conflict in Syria: Reality or Illusion 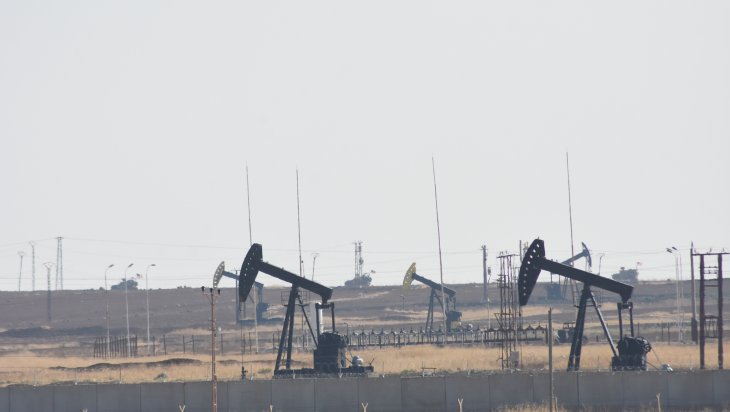 There has been a great deal of exaggerated talk recently about the international conflict over Syria's energy sources (oil and natural gas), and some press reports have even suggested the possibility of a global war in Syria because of the conflict over these sources, especially between the US and Russia. This is greatly exaggerated. Initially, international powers did not interfere in Syria for oil or gas, but for many other strategic reasons. More recently, the energy sources in Syria have become a tool used by some countries to achieve the strategic objectives of their presence in Syria. This article will discuss the reasons for foreign intervention in Syria, making clear that oil and gas resources do not constitute the principal motivation.

Syrian oil fields are in the northeast of the country, while gas fields are concentrated in the center, with expectations of a large reserve in territorial waters overlooking the Mediterranean. Syria's oil reserves are estimated at 2.6 billion barrels, but the production had fallen below 400,000 bpd before 2011. Since the outbreak of the revolution in 2011, there have been no reliable statistics on the volume of production, although some unofficial reports have indicated that it ranges between 70-80 thousand barrels per day, mostly heavy oil with high sulfur content.  This oil is one of the lowest types in terms of price, and most of it is exported. On the other hand, natural gas is consumed domestically; there are no confirmed studies on the size of reserves in territorial waters.

None of the above is attractive to the three countries (Iran, the US and Russia) that are most involved in Syria and whose forces are in energy source areas. They are among the world's largest producers of oil and natural gas and have large reserves.

Iran has interfered in Syria since the outbreak of the revolution and has supported the regime in many ways: military support (including the participation of the Revolutionary Guards), mercenaries and financial support. Iran has also sent several oil shipments to the regime. Iran has the world's second-largest natural gas reserves after Russia. The US sanctions on Syria have prevented Iran from selling oil; therefore, the reservoirs were full. This suggests that Iran did not interfere in Syria for oil, as it has enough and can not sell it, but to achieve other goals of controlling the region, extending Iranian influence. The war allowed Iran to intervene intensively in Syria and gave it the opportunity to open the way to the Mediterranean through Iraq. However, these ambitions appear to have been eroded by the Russian presence in Syria.

US intervention in Syria came after establishing and assuming leadership of the International Coalition to Defeat ISIS in September 2014. The US has used its intervention as a pretext to support its allies, the so-called Syrian Democratic Forces (SDF), and to establish a set of military bases inside Syria. The presence of US troops in Syria was a guarantee to the US that it could control the progress of the war in the way it saw fit. The US would not allow another country (Russia or Iran in particular) to act in a way it disagreed with, and hence its huge support for SDF. This was also in order to use external issues to distract Turkey from internal issues, thus  affecting its ascent  as a major Islamic power defending the rights of Muslims everywhere. Whatever the reasons for the presence of the US in Syria may be, Israel's security remains the most important one.

In December 2018, President Trump announced the withdrawal of US troops from Syria and the defeat of ISIS. However, the withdrawal began only after Trump’s subsequent announcement in October 2019 that the US troops would leave Syria as soon as possible. It seemed that the US reconsidered its initial decision after its European allies’ expressed their disappointment. Moreover, the US found that its withdrawal would allow Russia and Iran to dominate the Syrian landscape, and its SDF allies would be subjected to a resounding defeat by Turkey and the Syrian National Army. Therefore, the US decided to keep some of its forces (about 600) in Syria under the pretext of protecting the oil fields from ISIS. In one of his statements on 27th October 2019, when he announced the death of ISIS’ leader, Trump said:

"We are leaving solders to secure the oil, and we might have to fight for it. There is massive amounts of oil (in Syria) and we are securing it for a couple of reasons:

1. It stops ISIS because ISIS got tremendous wealth from that oil. We have taken it. It is secured.
2. Somebody else may claim it (the oil), but either we will negotiate a deal with whoever’s claiming it if we think it is fair or we will militarily stop them very quickly.”

The first reason may be flimsy because the US itself has declared the elimination of ISIS, while the second is the real reason that US forces control the oil fields. It is a guarantee to protect its strategic interests and those of its partners in the region, providing them with a source of income and maintaining pressure on the regime and Russia not to attack SDF.

Several agreements were reached between SDF and the regime on oil in the northeast. Some of these agreements included SDF receiving 75 barrels of refined oil from the regime (as it controls the refineries in Homs and Banias) in exchange for giving it 100 barrels of crude oil. It was reported that the regime receives 65% of oil revenues in exchange for SDF 35% in addition to electricity, services and the facilitation trade. Under these agreements, the regime has reactivated its official institutions in Hasakeh, Deir Ezzor and Raqqa, and still maintains military forces in the centers of some cities there. It should be noted that the broker of the agreements between the two sides is Hossam Katerji, a member of the Syrian parliament, one of the persons on whom strict sanctions were imposed by the US and EU in 2018 for buying oil from ISIS.

In addition, the SDF has been sending some Syrian oil to Iraqi Kurdistan, where it is refined and re-exported via the Ceyhan pipeline as Iraqi oil, despite US imposed sanctions on the Syrian oil sector after 2011, which have pushed foreign investment companies to leave Syria.

Russia began using its military power to support the regime in Syria in 2015, helping Bashar al-Assad remain nominally in power. Russia then began to reduce Iran's role in Syria and appeared to be the de facto ruler, leaving no role for the regime, especially at the international level. Russia has deliberately insulted Bashar al-Assad several times, apparently during Putin's visit to the Hmeimim base in December 2017, to show its dominance.

The war in Syria was an excellent opportunity for Russia to take control of Syria's territory, which brought many benefits. The control of Syria allowed Russia to intervene directly in Syria and the Middle East, which seemed to maintain the balance of the Cold War with the US in the Middle East, and enabled Russia to gain a foothold in the warm waters of the Mediterranean, which is very important for the Russian navy due to the freezing of the Russian coast for a long period of the year. Controlling Syria's territory means blocking any attempt to establish a natural gas pipeline from the Middle East towards Europe. Given Russia's role in Libya, it seems that Russia is trying to tighten the ring around Europe to make it one day at the mercy of only Russian gas. We should not forget that the war in Syria was a field to test hundreds of types of Russian weapons and train Russian forces on the ground at the expense of Syrians.

Russia intends to maintain its presence in Syria for decades, and this is evident in the agreements it has signed with the regime, such as the 49-year agreement of Tartous port administration signed in 2019. Russia has signed several agreements with the regime in recent years. The agreements give Russia the right to rehabilitate oil wells and infrastructure, provide energy advisory support and train technical personnel. Some of these agreements are worth about $ 40 billion. In addition, there is an agreement signed with a Russian security company in 2017 that includes the protection of oil and gas installations from ISIS against 25% of the profits.

Under these agreements, Russia is assured of almost complete control over the oil and gas sectors in Syria in the future, and these agreements will be a heavy burden on the Syrian people in the coming years because they are legitimate in terms of the legal framework. The regime still represents the Syrian state at the international level, which means that the agreements are binding on its parties - Russia and Syria. However, there are obstacles to Russia's control of Syrian oil now, the most important of which are:

- US and SDF control over Syrian oil fields. Russian forces attempted to advance towards fields in Deir Ezzor in February 2018, but US forces destroyed all advance troops. Russia has said five of its troops have been killed, other sources have reported more than 200 killed. This is the only time there has been a direct confrontation between US and Russian forces in Syria.
- US and European sanctions on the oil sector in Syria. This means that Russia will not be able to sell Syrian oil on international markets.
- Agreements previously concluded with international companies that may still be in force.

Based on the aforementioned, Russia, in the near future, is likely to focus on domestic gas which is being consumed in the domestic sector and for power generation, and exploration in Syria's territorial waters.

It seems that the US will negotiate with Russia on oil fields in order to make gains, whether in Syria or elsewhere in the world, where there is a proxy conflict between both countries (Ukraine, for example), or that the US will make the oil fields a bargaining chip of SDF in its negotiations with the regime for future political gains. This means that the US will exit Syria sooner or later after making strategic gains for it or its allies, whether associated with oil and gas or not. It also means that, Russia will control the oil and gas sectors, and will remain in Syria and dominate the country for a long period of time.