The PUK-Gorran Agreement in the KRG: New Balances of Power? 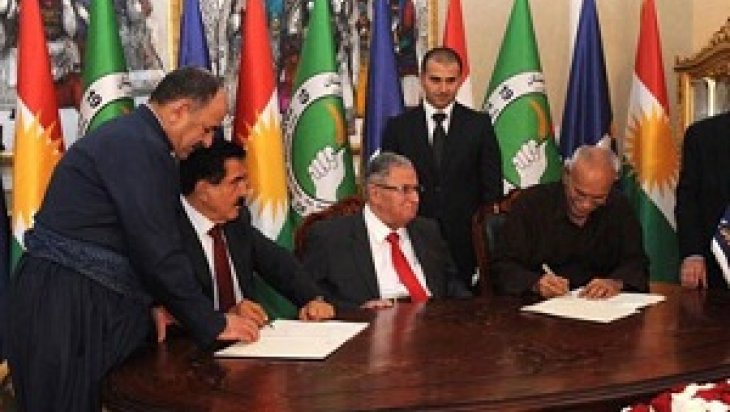 The governmental crisis, economic woes, the fight against ISIS, unstable relations with Baghdad and the independence referendum are all on the Kurdistan Regional Government’s agenda (KRG). Meanwhile, an agreement signed by two main Iraqi Kurdish political parties, Gorran and the Patriotic Union of Kurdistan (PUK) on May 17, 2016, is creating new balances of power in the internal politics of the KRG. This agreement between the PUK and Gorran is a veritably new milestone in Kurdish politics within Iraq. The agreement is comprised of 11 sections and 25 articles, but can be said to have more critical meaning and weight, when considered in political terms. It would be necessary to look at the political environment? in order to understand the meaning of this development.

It is possible to identify this text as a new strategic agreement between the PUK and Gorran. A so-called “strategic agreement” was concluded between the KDP and PUK in 2004.  Within this preliminary agreement, it was envisaged that both the KDP and PUK would run for the elections with a joint list, share executive power within the KRG and that both parties would control the KRG’s office of prime ministry for two years. This agreement remained valid for some time, even though it was interrupted by the separation of the Gorran Movement from the PUK in 2009, which received almost 25% of the votes at the time. Later in 2013, the KDP and PUK ran for elections with separate lists. After these elections, the KDP, which received 38% of the votes, sought to form government through a coalition with Gorran and the other parties, rather than with the PUK. The PUK was initially excluded from the government formation process, but was able to take part in government after it was formed. A large number of politicians from the KDP and PUK clearly indicated that the “strategic agreement” between the KDP and PUK was invalid since then.

The current agreement between the PUK and Gorran also states that both parties will run for the Kurdistan parliamentary elections, the elections for the Council of Representatives of Iraq and for local elections with a joint list and that the current representatives of both parties will work in cooperation. This situation could alter the destiny of the elections, especially in terms of the Kurdistan Parliament. Indeed, the KDP won 38 seats (38%), Gorran won 24 seats (24%) and PUK won 18 seats (18%) in the last elections held for the Kurdistan Parliament in 2013. The KDP formed the KRG government, based on these results. The PUK and Gorran garnered 42 seats in total, following their agreement. Those 42 seats do not constitute a majority in the Kurdistan Parliament, which has 111 seats in total. However, the votes of the PUK-Gorran alliance surpass that of the KDP alone. Considering that elections for the Kurdistan Parliament are held every 4 years, it would not be wrong to say that this alliance, provided it is maintained with unity, will be in an advantageous position in the government formation after the 2017 elections.

On the other hand, this agreement could also strengthen the alliance between the PUK and Gorran at the local level. Even though Gorran was the first party with 14 seats in the Provincial Council of Sulaymaniyah in the last local elections, it forged an agreement with the PUK, which won 13 seats, and assigned a governor from the PUK. With the new agreement, it will be possible to expand the cooperation between the PUK and Gorran to other provinces. Even though Kirkuk is outside the KRG borders, the PUK possibly has an upper hand over the KDP in Kirkuk. Gorran is not influential in Kirkuk. However, it is possible that the alliance between the PUK and Gorran will allow the former to feel more secure in the provinces of Sulaymaniyah and Germiyan, where both parties have common ground, and to consolidate its presence in Kirkuk and other regions.

Furthermore, the PUK-Gorran agreement is open to the idea of involving third parties. Therefore, it is possible to interpret this as a move to restrict the KDP’s room for maneuver.  Indeed, the KDP has closed the door on cooperation with this alliance, by clearly and harshly objecting to the agreement. The Islamist parties, however, which play a balancing role in the Kurdistan Parliament and within the KRG, have not yet clearly manifested their position.. Even so, it is possible that the PUK-Gorran alliance will attract the Islamist parties, if we judge by their positions in the parliamentary dispute about the extension of the KRG Leader Masoud Barzani’s term in June and August 2015. If this happens, the KDP will probably be alone in the domestic politics of the KRG.

The KDP has harshly criticized the agreement and indicated that it may trigger instability in the KRG. This shows that the KDP has interpreted this development as an “effort to marginalize it,” and is determined to adopt a hard line against other parties. The KDP’s attitude towards Gorran members, which it held accountable for the anti-KDP demonstrations in Sulaymaniyah, illustrates this hard line rhetoric. Previously, the Gorran member and Speaker of the Kurdistan Parliament, Yousef Mohammed Sadiq, was not allowed to enter Erbil after the demonstrations in Sulaymaniyah, while four ministers from Gorran were removed from the KRG. Moreover, operations were launched at several points, especially in Dohuk, targeting the representation offices of Gorran and its media organizations, which were eventually shut down. If the KDP continues to act in the same manner, this may escalate the political crisis into an open conflict within the KRG. Indeed, such conflict was foreseen in the PUK-Gorran agreement, and civil war was considered as a crime in the 9th article of the agreement.

While the PUK-Gorran agreement defends the empowerment of local autonomy, it also includes an understanding concerning the abolition of dual administration in the KRG. At this point, it is possible to say that the PUK is again trying to gain an executive position in the domestic politics of the KRG. Even though the PUK took part in the KRG cabinet after 2003, the KDP became the executive power of the KRG, while the PUK’s image was gradually tarnished and it became the third party in the last elections. Considering that Gorran split from the PUK and shares the same constituency with Gorran, this agreement may allow the PUK to strengthen its hand in the executive structure of the KRG.

In conclusion, this agreement reconfigures power balances for the KRG in all respects. These new reconfigurations signal the beginning of a new period in the internal politics of the KRG. Even though the agreement defends the integration of different groups into the KRG, the existing political crisis and divisions may risk deepening, if the KDP acts in a more confrontational way in order to maintain its position and power. In turn, by capitalizing on the momentum generated by the agreement, the PUK and Gorran may act in a more reckless manner to overcome the crisis that is taking place in the parliament. Unless the KDP cedes to a compromise, it seems unlikely that a solution will be reached to address the crisis in the parliament, especially considering the differences of opinion regarding the election of the speaker of the parliament. An early election could also be an option to overcome the political crisis. However, the economic crisis in the KRG, the ongoing fight against ISIS, the independence referendum, and lingering problems with Baghdad, cast doubts on the prospects of holding early elections. At this point, the most probable scenario is that the KRG will continue to lead an uncertain political process, in which the parties will take their positions and try to strengthen their hands in anticipation of the next general elections in 2017.