The Rise of Islamic Front in Syria 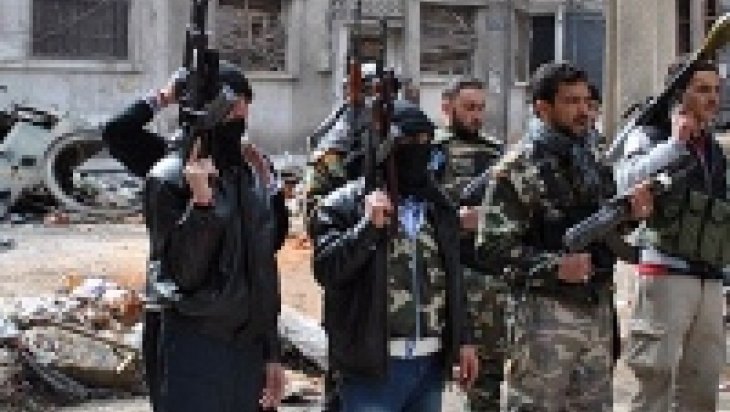 The armed opposition in Syria gathered under the umbrella of Free Syrian Army from the very beginning. However, the structure consisting of more than 1000 different groups failed to become integrated. A leadership under the name of Supreme Military Council (SMC) was created to turn it into a regular army structure, and Salim Idris was elected as the Chief of Staff of the SMC. But still, the Council could not exercise influence over the dispersed armed groups. The armed groups directly paid court to the countries, organizations, or people they provided funding from; rather than to the Council or to Salim Idris. Some armed groups  became prominent within this structure, and dispersed armed forces started to gathered in certain headquarters. Those with Islamic – Salafi ideology became prominent groups during this process. Depending on the capital provided by the Gulf states, those groups chose to form an alliance against the rising threat of Al Qaeda, as well as the failure of the Free Syrian Army. At the end of this process, seven major Islamic – Salafi groups joined their forces and declared creation of the Islamic Front on November 22nd, 2013. The Islamic Front is currently the most powerful insurgent group in Syria. The sub-groups of the Islamic Front are listed as follows:

2. Jaysh al-Islam (Army of Islam): It was formed upon merging of 43 Islamist groups, mainly operating in Ghouta located in eastern Damascus under opposition control. It is one of the most powerful insurgent groups. The leader of the group is Zahran Alloush, known as one of the most effective rebel leaders. Alloush was released by the regime during mid-2011. In an interview carried out recently, “Assad might have released them the uprising broke out in order to reinforce the Islamic identity of the opposition, and to radicalize the uprising,” said Zahran Alloush.

3. Suqour al-Sham Brigade: The Islamist organization which is the former unit of the Free Syrian Army has influence over northwestern Syria and Idlib where it first emerged. The leader of the group is Ahmed Abu Issa.

4. Al-Tawhid Brigade: The brigade was founded in mid-2012, through the merger of a number of armed groups in the countryside north of Aleppo. The al-Tawhid brigade which was the biggest fighting faction in Aleppo until recently has grown weaker after the leader Abdul Qadir al-Saleh's death (of Turkmen origin). After Saleh's death, Abdul Azez Salameh took over the political leadership of the movement.

5. Al-Haqq Brigade (Liwa al-Haqq): It was founded through the merger of Salafi groups in Homs in 2012. It is mainly active in Homs and its neighborhood.

7. The Kurdish Islamic Front: This is a relatively weak group which consists of Kurdish Islamists. The group is mainly active in Aleppo and northern Syria.

The Islamic Front is an umbrella organisation comprising of the most powerful Islamist – Salafi groups within the Free Syrian Army, which leaves the Al Qaeda-affiliated al-Nusra Front and the Islamic State of Iraq and al-Sham (ISIS) out. (As a matter of fact most of the groups have never admitted they fought under the umbrella of the Free Syrian Army since the beginning of the uprising.) The Islamic Front defines itself as “an independent military, political, and social formation that aims to bring down the Assad regime in Syria, and to build an Islamic State wherein God's law alone is sovereign”. The Islamic Front is estimated to have some 70 thousand fighters. Although this figure is not precise, it is possible to suggest that it contains the strongest and biggest number of opposition fighters. These groups depend on the financial aid mainly provided by the Gulf countries. Each group states that they do not recognize the authority of the Syrian National Coalition, and that the Coalition does not represent them. They also say they are against the Geneva II Conference, and they will consider those who will attend the conference “traitor”.

Another major factor behind the creation of the Islamic Front is the rising power of the  Islamic State of Iraq and al-Sham (ISIS). The relationship between the Islamist – Salafi groups and ISIS was based on mutual suspicion. Even though they cooperated in certain areas, the rebellious attitude of ISIS was disturbing for both Islamic Front and Free Syrian Army. Meanwhile, ISIS increasingly turn towards the areas already under opposition control, rather than the areas seized by the regime forces. The group took over the control of many areas seized by the Free Syrian Army which was in a weak position, and started to arrest leaders of certain units. Opposition started to become convinced that ISIS was in cooperation with the regime due to the fact that ISIS did not fight against the regime and the regime did not drop bombs on the areas under the control of ISIS. In an interview carried out with the Ahrar al-Sham leader Hasan Aboud, he said:

“All this fighting between rebel forces will only weaken the revolution and help the regime. We, as the Islamic Front, did not take the decision to fight ISIS, but whoever did it had his reasons because of the way ISIS treats other groups. ISIS denies reality, refusing to recognize that it is simply another group. It refuses to go to independent courts; it attacked many other groups, stole their weapons, occupied their headquarters, and arbitrarily apprehended numerous activists, journalists and rebels. It has been torturing its prisoners. These transgressions accumulated, and people got fed up with ISIS. Some of those people have attacked ISIS’s positions, but ISIS was first to attack in other places, bringing this on itself.”

The trigger of the conflict between the Islamic Front and ISIS was the killing of Dr. Hussein al-Suleiman, an Ahrar al-Sham leader, by ISIS in early January 2014. Al-Suleiman who went to Maskana village located in the countryside of Aleppo in order to solve the problem between ISIS and Ahrar al-Sham was tortured and killed by ISIS. Then the Islamic Front made a very strong statement after this incident and accused ISIS of being “worse than the Assad regime”, which led to conflicts between the parties in strategic regions of northern Syria and border-crossings. As a result of the conflicts, the Islamic Front took over the control of many checkpoints in Idlib-Atmah; Dane and Atarib in Aleppo, Munbic, Jarablus and Aleppo city center from ISIS. ISIS which took a severe blow in Aleppo and Idlib turned towards al-Raqqa province which is considered the headquarter of the organisation, and seized control of almost the entire province before long. Also Akçakale border-crossing in Şanlıurfa was seized by ISIS. The Ahrar al-Sham units affiliated to the Islamic front which lost control of the border-crossing laid down their arms and took shelter in Turkey. It is reportedly said that more than 700 people have been killed in total from both parties as a result of the recent conflicts between the Islamic Front and ISIS.

There are two factors behind ISIS's withdrawal: Firstly, formation of the Islamic Front and its receiving support to fight against ISIS. Secondly, the fact that ISIS had to transfer some of its resources to Iraq because of the fight against the central government in Anbar province of Iraq. The Islamic Front's attacks on ISIS, and the Iraqi army's ISIS operations in Anbar took place during the same period of time.

The Islamic Front comes to the forefront as the strongest alternative against the ISIS threat in Syria. Besides, it has become the best alternative to fight against Assad compared to the Free Syrian Army which cannot even protect its own headquarter. The Islamic Front has a much more organized and ideologically homogenous structure than the Free Syrian Army. Therefore, there might be a bigger support for the Islamic Front. Despite the success achieved in the first place, whether the Islamic Front could eliminate the ISIS threat or not directly depends on the result of the conflicts in the Iraqi province of Anbar. Because ISIS still seizes control of the vast majority of al-Raqqah province, some parts of Deir ez-Zor province and certain oil fields in the area, as well as the border-crossing to Iraq. ISIS chose to withdraw from Aleppo and Idlib and to concentrate on al-Raqqah due to the immense pressure. At this stage, the border-crossing to Iraq is of a greater importance for them. In Idlib and Aleppo, on the other hand, they preferred fighting through terrorist attacks to fighting directly. The bomb-laden vehicles exploding in the opposition districts of Aleppo in the recent period are the result of this strategy.