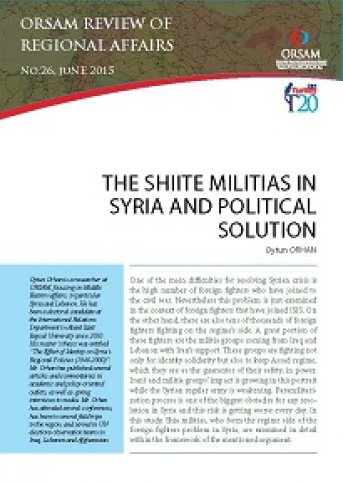 The Shiite Militias in Syria and Political Solution

One of the main difficulties for resolving Syrian crisis is the high number of foreign fighters who have joined to the civil war. Nevertheless this problem is just examined in the context of foreign fighters that have joined ISIS. On the other hand, there are also tens of thousands of foreign fighters fighting on the regime’s side. A great portion of these fighters are the militia groups coming from Iraq and Lebanon with Iran’s support. These groups are fighting not only for identity solidarity but also to keep Assad regime, which they see as the guarantor of their safety, in power. Iran’s and militia groups’ impact is growing in this portrait while the Syrian regular army is weakening. Paramilitarization process is one of the biggest obstacles for any resolution in Syria and this risk is getting worse every day. In this study, Shia militias, who form the regime side of the foreign fighters problem in Syria, are examined in detail within the framework of the mentioned argument.