The Suleyman Shah Operation and the Aftermath 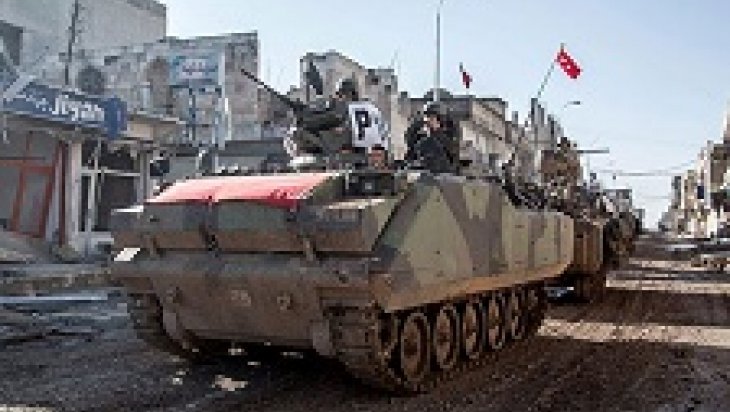 With the operation conducted by Turkish Armed Forces, Suleyman Shah Tomb in Syria, the only Turkish enclave abroad, had been evacuated and moved to the Syrian Esme village close to the border. With the issues of the operation’s way of conduction, its timing and its goals; it has been widely discussed whether this will indicate a new term in Turkey’s relations with ISIS and PYD, which is a Syrian branch of PKK.

The New Term in the Struggle Against ISIS

Turkey explained the aim of the operation as moving the tomb to a secure place since the risk of an attack had increased. When considering the timing of the operation; it drew attention that the operation occured three days after the signing of ‘train and equip’ agreement between Turkey and the US. It was stated that according to the agreement the trained Syrian opposition will fight against the Assad regime and ISIS. These incidents have been considered as a sign that after the operation Turkey will have a more active role in struggling against ISIS.

The moving of the tomb alone does not mean that there will be radical changes related to the Turkey’s struggle method with ISIS. The reason of Turkey’s cautious actions so far was not only because Suleyman Shah Tomb was under the threat of ISIS. With the Suleyman Shah operation, one of the factors preventing Turkey to struggle against ISIS have been removed. However, Turkey still feels vulnerable to the potential ISIS threat and thinks that the organisation poses a direct threat to itself. For this reason, it will remain insistent on the issue of not joining the military dimension of the struggle against ISIS without seeing an extensive plan and strategy which provide a long term solution and diminishes the factors that created the organisation. Furthermore, Turkey believes that in case of a failure in the struggle against ISIS, it will pay the cost in the first place. Thus, it does not want to be a part of a plan in which it does not believe in.

This fact does not imply that there will not be any changes after the Sulayman Shah operation. A situation may occur similar to the aftermath of the rescuing of Turkish hostages from the Mosul Consulate. There had been differences in the statements of Turkish decision makers on ISIS before and the aftermath of the resolution of the hostage crisis. The passing of peshmerga forces and Free Syrian Army through the Turkish land to fight against ISIS in Kobani also occured in the same period. The resolving of Suleyman Shah issue will enable to take actions in a broader sphere to fight against ISIS.

The increased risk of a potential attack on the tomb is not only related to the ‘train and equip’ agreement. ISIS’s retreat from Kobani is another reason. ISIS believes that Turkey is responsible for this failure. The final reason is that, Kurdish militia YPG has been processing in Kobani against ISIS, and the fight between ISIS and YPG has got closer to the area of Suleyman Shah tomb. This has increased the security risk in the field. Thus, the prior aim of the operation is to provide security to the Turkish soldiers. An attack to the tomb from ISIS would potentially drag Turkey into the middle of Syrian civil war. The potential ISIS attack would bring about a military respond from Turkey and It would be no longer possible for Turkey not to be a party at the Syrian civil war. This would have further implications in the areas of domestic security.

Shah Firat Operation and the future of Turkey-PYD relations

Whether Turkish-PYD relations will go through a new term or not has been widely discussed since Turkish Military Force has passed through the area under the control of YPG to reach the tomb, and there has not been any conflict and the new place of the tomb is also under YPG control.

Different statements have been made by Turkish and PYD sides. While Turkish authorities explained that “to prevent any attack, PYD has been only informed before the operation”, PYD has tired to create an image that it “helped to Turkey”.  Actually, even the statements show that there will not be any new term in Turkish-PYD relations. The factors that caused tension in relations so far, are still there. In the first case, Turkey wants YPG to stop its collaboration with the regime and to act with the Syrian opposition. Secondly, Turkey thinks that PYD’s actions such as its one sided “canton declaration” are undermining the policy of territorial integrity of Syria. Thirdly, Turkey demands an end of PYD’s authoritarianism in Syrian Kurdish areas and an environment in which Kurdish parties could actively participate. It is not realistic to expect any changes in this issues from PYD in the short term. PYD’s expectations from Turkey are the opening of the border gates in the areas under its control and the supporting of the ‘cantons’.

The only factor that could urge cooperation between the to sides is the common threat of ISIS. However, this would imply a constrained cooperation in terms of time and scope. Furthermore, as happened in Kobani, the sides would try to shape the form of the cooperation in a way that the other side could not gain more power. That is why, it is more likely that the relations will be mutually suspicious and focusing on threat perception.

From these perspectives, it is possible to say that Turkey-PYD relation is directly shaped by the Solution Process. The end of the Solution Process would remove the constrains and bring about a relation model which is mutually tense and even confrontational. The success of the process would diminish the mutual threat perception and imply a cooperation on the issues that create problems.