Today's Hirak in Algeria Needs to Take a New Track 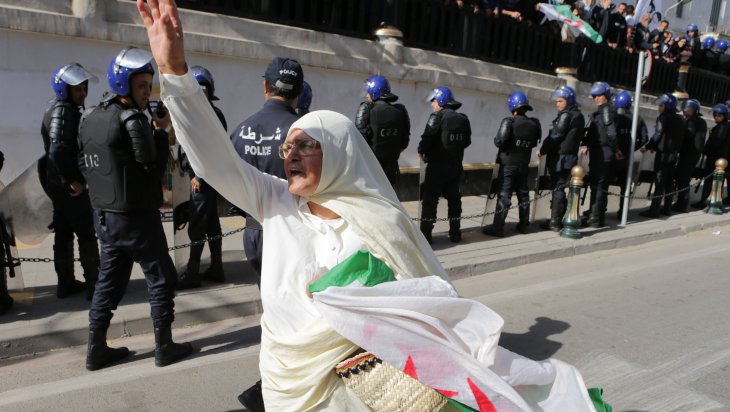 The Algerian Mosaic Hirak celebrates its first anniversary with peaceful protests accompanied by the military. The protesters’ bravery took the Bouteflika system and its oligarchs down. Yet the radical wing in this heterogeneous protest movement continues taking the main large cities’ streets, since Friday, 22nd 2019 is a day Algerians want to be written on a white marble stone. On the eve of the first anniversary of the Hirak, the president declared February, 22nd to be a national day.

A year of weekly peaceful protests has passed and the regime did not fall. On the contrary, the main pillar of this regime is the military institution that managed the constitutional crisis throughout the presidential election in December 2019. Following this election, a new president was elected and new government was formed led by Premier Djerad with President Tebboune. This is moving forward to the implementation of President Tebboune’s program. To many this presidential election changed the Hirak’s imperatives and dynamic and, to some extent, new demands surfaced from the urban protests story narrative.

So, the new administration led by the president is getting the support of the regime. In Algeria the regime is still intact, but the Bouteflika system fell. The majority of Algerians has been noticing that, indeed, they got rid of the Bouteflika system and there is in fact something on the horizon, but nothing is going well with their daily life. On the other hand, the radical wing in the Hirak sees that something is moving but nothing is changing.

What do Algerians really want? Does the radical wing in the Hirak need to change? How would the new administration handle these complex demands?

For the silent majority, the military prevented the country from engaging in a civil war and managed the political stability and security, despite the country’s economic and financial problems. Meanwhile the radical wing in the Hirak still looks at the new president’s extended hand policy as a farce. Although the overall economic and security situations are the new administration priorities, the high cost of living and unemployment continue to hit a good portion of Algerian society.

Lately President Tebboune is putting foreign policy and the national security agenda up front. This also helps his administration to consolidate the conservative and nationalist grassroots and elite, while leaving not much room for the “Swiss Cheese” political opposition and the radical wing in the Hirak to stand against the regime and the new president’s policies.

The year 2019 was not a very good year for Bouteflika. A new political adjective was invented to describe the system: the Gang (al-Essaba), the ex-president’s presidential alliance party leaders who are today in prison, his brother, Saïd and General Toufik, who took a fifteen-year prison sentence, and his later prime ministers who took fifteen-years. There were developments with the chapter of the purge operation launched by the military last summer. To look at the case of Sa’ad Rabrab, Rabrab is a businessman and CEO of the Cevital industrial group, who was released from jail. So it goes for Ms. Louisa Hanoun, the Chairwoman of the Trotskyist Workers Party (Parti des Travailleurs). Also other pieces from the Mosaic Hirak were released like Lakhdar Bourega’a, Dahmani Nour al-Houda Yasmina, and Samir Belarbi.

This was a strong message sent to the radical wing in the Hirak from the military and the new president, who is containing the radical wing in the Hirak. While President Tebboune is going forward for constitutional amendments and electoral law reform, and he will soon dissolve the current Algerian Parliament, this is as good opportunity to reshuffle the entire Algerian political system through new parliamentarian and municipal elections by the end of the year.

The new leadership under President Tebboune, who does not have a declared political party affiliation, leaves him a large area of political maneuver to lead. The FLN Party, however, Algeria’s main political party and one of Algeria’s state pillars, is in a dire situation now. The Islamists are in a deep political identity crisis, and the so-called democratic bloc is lost in translation. Its leaders continue to stand with the Hirak rejectionists, although they have gradually returned to their political routine. A leadership problem is to be observed in this bloc noticeable with the Islamist section.

All expectations will be with the Constitutional Reform Committee. The appointed chairman of the CRC continues to receive support from his peers and the media but he still has opponents from the Hirak and civil society activists.

On the other hand, the Democratic Alternative, Algeria’s republican current which hopes to topple the regime, knows well that it is impossible. They should get into the process and participate in local and national elections and reshape their elitist message with a credible messenger who could connect with the real people.

The regime is also trying to keep intact the popular sentiment that arose in the aftermath of General Ahmed Gaïd Salah’s funerals. The regime continues to underline that there are two camps in Algeria: those who are in favor of the reforms and those who are not. The regime suggested that today’s politics is not about being a leftist/secularist or a rightist/national-Islamist but being pro-reform and eventually democracy. The regime wants to expand the scope of the pro-reform camp as the regime these days criticizes the fragmented civil society and the leftist political parties through the official media and alleged independent ones for not being active in terms of supporting the new president’s administration and government.

President Tebboune is planning to build a political road map through the connection with the people and to look for a political partner that might emerge from the Hirak. The vital question for the Hirak is now whether it can grow a more independent voice as the demands are becoming more socioeconomic. This is a very risky line since the Hirak has lost enormous momentum in the deep country as a result of the military’s smart crisis management and accompaniment of the Hirak since Feb, 22nd 2019. The Hirak has also lost control of law-and-order operations both inside urban areas and outside of them.

The socioeconomic demands usually are the tasks of the Labor Union (UGTA) that is trying to regain its moral role after the fiasco of the former SG ruling the workers union with iron fist for a quarter-century. The former SG was one of the Bouteflika’s minions. Political and economic reforms were announced in last week’s annual meeting between the President of the Republic and the Walis (heads of the 48 Algeria's provinces), encouraging them to be more concerned about people’s demands and fighting local corruption and cronyism. The president also appointed a Republic facilitator, whose role will be a link between the Republic and the people.

Thus, it is hard to suggest that this would bring a new momentum of Algeria’s politics, time and courage are needed to see the real capacity of the new administration. Some cabinet members are already getting the conventional media’s and social media’s intention, i.e. Dr. Rezigue, the commerce minister, who seems gaining some sympathy from the people for his bold decisions related to their weekly shopping basket (al-Qoffa) on the eve of the holy month of Ramadhan.

The fall of the Gang (al-Essaba), the demystification of General Toufik and Saïd Bouteflika, and, more importantly, the fall of the mask of fear for good are big achievements for the millions who took the streets during Hirak, Act I. People today are still cynical towards politics in general. There is a feeling among the people such that they are anxious about the return of al-Essaba (the Gang deep state) through the remains of the ex-DRS State (the feared Intelligence Service), and its ramifications and networks within civil society, local politicians, the business community and media actors.

Without a real opposition, professional media, a sharp elite, connected civil society activists, and a structured labor union, Algerians can only get change that the regime wants. Protesters in the Hirak, however, can hold meetings, sit-ins, conferences, and make a yearly celebration of their Hirak, but a real Hirak should take a new track.