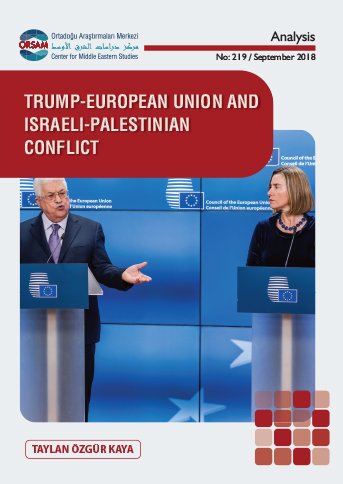 The division of opinion between the US and the EU (European Union) on issues such as commercial relations and nuclear settlement with Iran as a result of US President Donald Trump's recent policies, has gained a new dimension after US President’s decision to recognize Jerusalem as the capital of the State of Israel and to move the US Embassy in Tel Aviv to Jerusalem. Since the beginning of the 1970s when the Western European states started to develop a common policy for the solution of the Arab-Israeli or Israeli-Palestinian Conflict within the framework of the European Community (EC), the policies of the EU and the US towards the solution of the problem were sometimes in full compliance and sometimes in conflict. Following Trump’s recent Jerusalem decision, the European stance against the unilaterally changing status of Jerusalem and its commitment to a two-state solution in which Jerusalem would be the capital of both Palestine and the state of Israel have revealed a new divergence in the two actors' approach to the conflict. This study aims to present an analysis of the similarities and disagreements of both actors’ approaches to the solution of the problem since the early 1970s. In the first part, European states’ efforts to develop a common policy that is independent from the US within the framework of the EC in the 1970s and 1980s and their efforts to develop peace initiative in the early 1980s and the US, Israeli and Arab reactions in the face of these efforts will be discussed. In the second part, the peace process that began with the Madrid Conference in the 1990s and the formation of the Quartet on the Middle East in the 2000s and the rapprochement between the European and US approaches to the problem will be addressed. The final chapter will focus on the diversion between the Union and the US after Trump's Jerusalem decision and how this will affect the future of the suspended peace process in the Middle East.