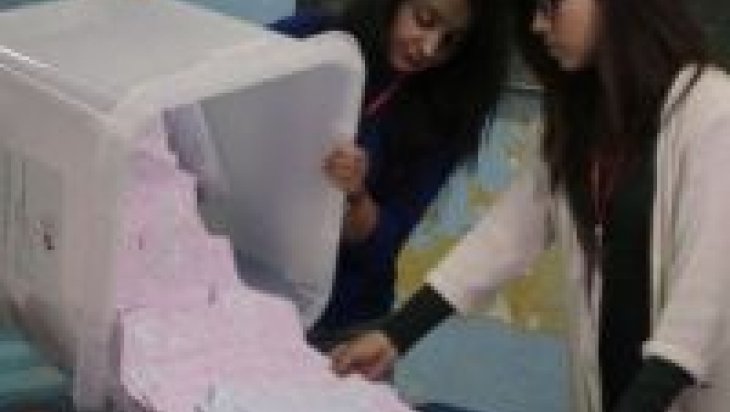 As a successful example of the Arab Spring, Tunisia, following the parliamentary elections held in October, held presidential elections this time on 23 November 2014. In the presidential election, which is an important milestone for the transition period that began with 2011, Tunisians voted to elect their president for the first time in their political history. Voter turnout is around % 64-65 according to preliminary results. As expected, Tunisians decided to choose from two forefront rivals of election, Said Cebsi and Moncef Marzouki although there were 22 candidates in total. Said Cebsi, garnered just over 39% of the vote while interim president and candidate of CPR, partner of troika governments formed with Nahda and Ettakatol, Moncef Marzouki finished with 33%, according to preliminary results. The remaining 20 candidates took 10% or less votes. As no candidate garnered over P of the vote, Tunisians will elect their president in a runoff on December between two frontrunner of the election, Said Cebsi and Monsef Marzouki. The second round will be held on 14 December or 21 December according to ISIE, Tunisian Electoral Commission.

Beji Caid el Sebsi was accused of being old guard during both elections by several political figures and parties. These accusations were overshadowed by the opposition to Nahda during parliamentary election, today it has been tensely discussed due to its victory in the parliamentary election and possible victory in the presidential election. The fundamental factor behind deepening criticism is the fear from reinstallation of single party regime by occupying both presidency and prime ministry. Nahda’s decision not to run for presidential election triggered a deep discussion of this fear and led to emergence of political polarization over authoritarianism-democratization discussion. This new political polarization increases political support for Moncef Marzouki, whose party lost a rapid support and won only 1 seat in parliamentary election.

Beji Caid el Sebsi is a well-known political figure who served both during Habib Bouguiba are and Zine el Abidin ben Ali eras. Thanks to these experiences, he was successfully able to gather Destorian socialists, who were expelled from ruling party during Ben Ali, and members of former ruling party, RCD, which was banned in 2011. This coalition also includes left-wing and liberal movements and several civil society organizations. However, Destorian socialists and members of former ruling party, RCD, occupy central place in the party. This centralization opens a deep discussion whether the former regime comes back to country under the name of Nidaa Tounes. However results of both elections reveals that Tunisians, whose stability and security concerns had been raised following political assassinations and border clashes, decided stability rhetoric despite all discussions on installation of authoritarian regime and single-party rule. Polls conducted in this summer indicates that more than half of population are ready to choose a authoritarian rule instead of democratic one if the regime can sustain stability in the country. It seems that deepening discussions on authoritarianism and single-party rule have not changed this approach.

Noting the fact that democratization is a fragile transformation process, this tense discussion represents a vital political fault line in the country, which has experienced drifts between former regime nostalgia and pains of transition. In the spring of 2011, the reason behind the resignations of 2 interim governments formed by Caid Sebsi due to great opposition and protests was the national consensus to prevent reinstallation of the former regime. During 2011, the expectations and hopes on transition process were shaped by this dynamic. However, the Nahda’s victory on the October 2011 election was resulted with occupation of Tunisian agenda by Political Islam discussions. All developments occurred in economy and politics had been interpreted via this angle. However, Nahda’s defeat in the parliamentary election and its decision not to run for presidency helped a rapid return to vital issue in Tunisian politics. Equation of Nidaa Tounes to Destour Party of Bourguiba or RCD of Ben Ali does not reflect the reality. It is not possible to reinstall the former regime with all components under current circumstances. However, it is another fact that authoritarian regimes are capable of upgrading themselves, and this risk will continue to be the most vital threat for the democratization process. The presidential election already occupies a holy place in Tunisian history, because it reminds this fact. In conclusion, results of the presidential election will not only determine the next five years but also a broader future of the country. However despite all these discussions, many Tunisians decided on Said Sebsi who promises stability.

On December, the runoff between Said Sebsi and Moncef Marzuki will deepen democratization- authoritarianism discussions. Moncef Marzouki’s vote rates overlap with Nahda’s vote rate in the parliamentary election. Hence Marzouki needs to attract remaining of vote gone to other presidential candidates as well as @ who did not vote in the election. Given that there is only six percentage points between them in the first round, the runoff may well be a closer contest than expected. As a result, Tunisians will continue to discuss democratization, former regime and single-party fears in the upcoming days.