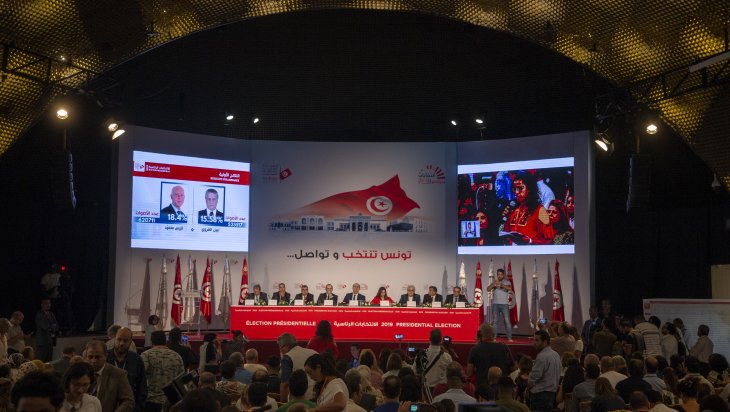 On Sunday September 15th, the Tunisian Presidential elections put an end to the old systemic political and elite hegemony and  demystified the legalist Islamists' rhetorical course and shredded the radical secularists utopian discourse. There is worthy of comment due to the theory of political parties and a fair interpretation of sociology.Such a political Tunisiami , “twisting” of the news continues as Western media persists in misinforming its general public and writing off the people’s civility, polity, and hope as a lost cause, disrespecting millions of men and women struggling for freedom, dignity, and even one day, direct democracy.

Making the story line an equation goes between the Islamists and the secularists on the one hand, and the regime on the other. It is as if  the country’s societal imperatives are political constants and economically stable. Yet, the post-Arab uprisings' outcome generated a political paradigm that people are in the middle ground between counterrevolutionaries and radical dystopian groups. An alibi that authoritarian regimes in the region have been using to crush any credible opposition to their thrones: like in Syria, Egypt, Sudan and Algeria before people in those countries rose up against the Military and the oligarchic system.

Currently these sources serve as the only reference to the Arab uprisings (“Arab Spring”), which I shall refer to as the region’s “People's Spring.” This is despite the fact that Arab conspirators and the so-called nationalist-conformists call it the “Arab Illusion” (al-Wahm al-Arabi). The news from the region, however, is still dire. So why should one assume a positive outlook? Libya is in full chaos, Algeria is an impasse, and Morocco is on a social dormant volcano.

The narrative of the People’s Spring is to bury the dystopian ideology of the powers in the region.

In fact, people are trying to remove tyrannical regimes and eventually establish democratic systems in their place but so far, they are failing, leaving the region in anarchy instead. As soon as they get the chance to speak up peacefully the outcome  flourishes.

This concerted struggle that is taking place, whether in Algeria, Tunisia, Libya, Egypt, and Sudan, is obstructed by solid pockets of resistance to real change by agents deep within the State. These agents, supported by the arrogant elite, scornful Western governments, and counterrevolutionaries. Arab countries are creating a nuanced judgment, so the outcome is made worse and contributes further to the political turmoil.

This can certainly be seen in Libya. A country with different political cultures and systems than Tunisia and Algeria, the level and intensity of chaos inherited from former leader, Colonel al-Gadafi, who set the entire country under a paranoid political system based on welfare, an archaic State and tribal loyalism system -- unfortunately the new Libya today is harvesting what he sowed for his forty-two years in power.

In this context it is fair to mention that some Arab countries are actually capable of achieving a transition to a semi-democratic State, especially given the short period of time since the revolts were sparked.

As for Western media, the immediate problem for most Americans, for instance, lies in confusion over their own current political tragicomedy. As for the French, domestically it is busy dealing with its socioeconomic “revolution” led by an unpopular President who wants to wipe out the old system, and design a new way of trendy politics. So far it looks like his stylish suits. Paris still looks at Tunisia as Puerto Rico. One recalls the statement of Madame Alliot Marie, then-Foreign Minister in President’s Sarkozy cabinet, during the Jasmine uprising against President Ben Ali regime, she suggested the French “savoir-fer” — metal sticks and modern helmets — for the police to restore law and order.

Nevertheless, the news from Tunisia is irresistibly hopeful, considering the economic and social circumstances of a country that has enjoyed only seven years of freedom to shape its future following half-a-century of one ruling party and rampant nepotism.

The most significant aspect of events in Tunisia is the capacity of all the major political actors, elite and media, including the Islamist a-Nahdha Party that led the ruling coalition, to negotiate with a political veteran. This was the past President Beji Gaïd al-Sabssi, and also, more importantly, to understand compromise in politics in order to maintain the political transition toward pluralism and allow all ideological groups to compete for power and thrive.

As evidence of such willingness on their part, al-Nahdha and a handful of smaller “left” opposition parties agreed in the past to launch a new national, political dialogue to resolve political stalemate.

Now, the discussion is about to form alliances in the aftermath of the Sunday, 15th  presidential election tsunami that shook the entire classic political parties represented in the current National Assembly and the analysts, which opens political maneuvers for the future government’s acts leading the way to the next month's legislative elections in a cohabitation model with the new elect-President, regardless of  his political identity and program.

The political contacts and, to some point, deal arrangements within political parties and  elite, who are still in the post-coma recovery, are making sure that the ongoing healthy political process would not fall into political regress. Tunisian voters didn’t show up en masse to the polls because they lost trust in political leaders and the elite. A lack of credibility in politics is noted among the voters across the region; what made a businessman à la Trump or Silvio of Tunisia, and a populist anti-system constitutionalist, eloquent and traditionalist by the Tunisian cultural norms, Mr. Kaïs Saeïd to qualify to the finale.

There is also Mr. Nabil al-Karaoui, who is in jail under corruption accusation, which will create a legal dilemma if he is elected on September, 28th.

Unlike in 2014,  the League for Human Rights, the Tunisian Bar Association, civil society groups, and the Labor Union (UGTT)have had a say in such historic transition. At this point, the credit went to then-President Dr. Moncef al-Merzouki, the big loser of last Sunday's early presidential elections, whose serious and genuine commitment to democracy played a major role in shaping the country and the region’s political destiny.

Meanwhile, the neighboring country Libya is in societal disorder, getting all the ingredients of a civil war and Algeria is suffering from its obstructionist secular political party leaders and elite who are diabolizing the Military, and polarizing the voters in light of the next December, 12th presidential elections. Nonetheless, Tunisia is in a process of forging an agreement, a social contract that offers an end to political violence and oligarchic system.

Such a civilized act could be extended to Algeria, and eventually to Libya where its fate is no longer in its hand -- regional and international axis have been built, and are imposing their agendas not only to carry on their special geopolitical and economical interests, but wanting Libya to become a militia State.

This is not to mention Egypt, where the General al-Sissi regime is not showing any sign of relenting at this time, even though a recent vocal voice on social media is getting audible, the daily videos of Mohammed Ali on social media, a real state entrepreneur, and an actor who has been showing the General’s extravaganza of palaces and hotels, and highlighting the level of corruption in the Military and their cronies in the country. Meanwhile the average Egyptian is struggling with the basics of daily life.B This week, he has called Egyptians to take the street for peaceful protest on Friday, 20th against General al-Sissi.

Egyptians' political parties and elite seem to be missing in action, whereas the masses might sound defeatist for the moment, but the success story of the emerging democracy in Tunisia, the hopeful Algerian Hirak, and the peaceful uprising in Sudan are on a trajectory of the dynamic of change that can give momentum to the January Revolution in Egypt a second wind.

However, in spite of the political upheaval and ensuing economic and finance turbulence, there is a valiant effort underway, and people in the region can feel a ray of hope from the second Jasmine revolt.