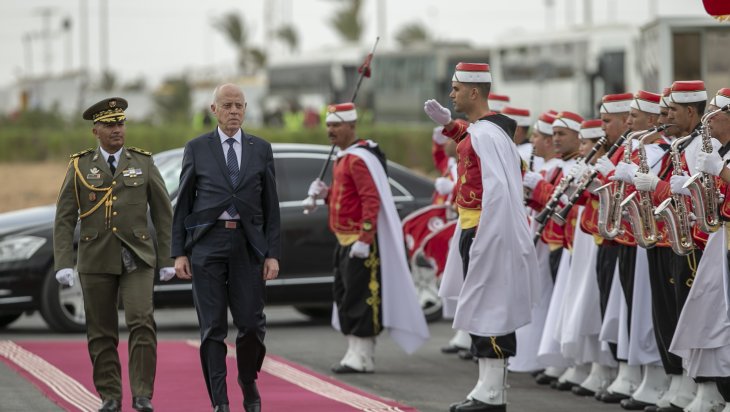 Almost a year ago, Tunisians elected Kaïs Saïed with an unprecedented popularity. The Tunisian president today dreams of having his own political party and more. After surmounting a serious political storm that could have evaporated Tunisians’ only democratic ray of hope, a healthy democratic process is on the rise that many countries in the MENA region envy. President Kaïs Saïed is working very hard to offer Tunisians a presidential system. Rebuilding Tunisia’s entire political spectrum, he sees this as a political salvation for the ongoing parliamentary system that is becoming toxic.

His political program is a combination of conservatism on societal questions like inheritance or women’s rights, institutional audacity, and uncompromising populism. The president is doing everything to make his constitutional reform dream come true, freeing the Tunisian political system from the old political bargain of the political parties. It takes, however, a lot of skill and courage in this exercise given the obstacles that have arisen in Tunisia since the Jasmine Revolution that sparked in the MENA region in 2011. This Jasmine Revolution gave Tunisians’ political parties, elite, and media a historical opportunity for legalist Islamists to lead, and respect
the constitution’s spirit.

President Kaïs Saïed, a 61-year-old constitutional law expert, campaigned on the values of the 2011 revolution, based on opposition to Westernised and corrupt elites and in favor of radical
decentralization. Around 90 percent of 18- to 25-year-olds voted for him, according to the Sigma polling institute, compared with 49.2 percent of voters over 60.

Premier Hichem Al-Mechichi decided to form a technocrat government, independent from the political parties but the An-Nahdha and Qalb Tounes parties have categorically refused the new premier’s bold political move to not have a partisan government that emanated from the late legislative election and that put the An-Nahdha party on top. Premier Al-Mechichi is considered to be the president’s confidant at a time when Tunisian voters are worried by the Covid-19 pandemic and its socio-economic repercussions on their pockets.

Yet Premier Al-Mechichi announced on August 24 the composition of his government, leaving no-room to the political parties. Nonetheless, the new prime minister picked his ministers from the pool of Tunisia’s public servants. These were women and men who were at the heart of the bureaucratic system that denounced the excesses of the partisan system and its political "compromises." Sometimes they are pushing for a sterile debate that has poisoned Tunisia’s political life, made Tunisians hate politics and politicians and, look for a better life elsewhere.

Tunisia's Parliament has approved Prime Minister Hichem Al-Mechichi's government with 134 votes out of the 217 members of parliament. President Kaïs Saïed has just won a battle of an unjust war against the political parties, the labor unions, the lobbyists, the media, and the elite. All the members of the new government know that they owe their ascension to the president and not to the parties’ “apparatchiks.” This would guarantee them a semi- "political autonomy" such that the president himself intends to get his own political party to be able to get a say in the parliament and move the country forward.

Political parties are up against the wall
Moreover, faced with the political force of Carthage Palace, the political parties find themselves cornered, which has made them vote for the Al-Mechichi government. They realized that, this time, they must play it safe otherwise Tunisian voters would fire them all and write them off as they did with Ben Ali. This would be a sense of a new dégagisme (firing all the corrupt politicians). This is a prospect that does not really enchant either the voters or the real opposition political parties like the An-Nahdha.

After the vote, Premier Al-Mechichi said his government would be able to "move forward" provided it was not bogged down in political tensions. Before the session, which was held amid a tussle for influence between President Kaïs Saïed and the main parties, Al-Mechichi defended his nominations in an address to lawmakers. He said, “the deteriorating situation in the country calls for competent figures who can intervene quickly and effectively to find solutions to the various problems and challenges.”

Reform this government
Today Tunisia's Parliament is deeply divided and many lawmakers were angry that Al-Mechichi bypassed the main political factions in building his cabinet. An-Nahdha, the largest parliamentary force and others have instead demanded a "political" government that reflects the balance of the political parties and factions in parliament. But hours before the vote, the legalist Islamist party said they would back the Al-Mechichi government despite reservations. Tunisia has been praised as a rare success story for the Arab Spring uprisings that swept the region in 2011, bringing down its longtime President Zine Al-Abidine Ben Ali. But it is now mired in social and economic crisis with the official unemployment rate at 18 percent and in need of new assistance from the International Monetary Fund. Tunisia's tourism-dependent economy shrank 21.6 percent in the second quarter of 2020 compared with the same period last year due to the Covid-19 pandemic crisis.

Thus, President Kaïs Saïed argues as a former Constitution Law professor in favor of a presidential system and a stable government that does not depend fully on the will of the legislative branch. This would have, especially in case of coalition governments under the current system, effective checks and balances that establish the presidency and the legislative branch as two parallel structures. Each structure allows the monitoring and checking on the other, hence preventing any abuse of power.

A political advantage for the voters is to be able to judge the president’s performance, rather than on the politicians’ maneuvers of the coalition of parties ruling the government. Furthermore, the Tunisian voters finally would make their vote worth it and count for choosing a real head of the state and a commander-in-chief. This is instead of choosing a relative majority that is caught up in the parliamentarians' and parties’ machine and puts a stop to the An-Nahdha party getting a comfortable majority.

In part, the Tunisian Constitution of 2014 was adopted by the Constituent Assembly elected in October 2011 following Tunisia’s Jasmine Revolution. President Kaïs Saïed has admittedly excelled at weakening his adversaries’ argument for the parliamentary system but how far could he go? If the new government is approved, it will be exclusively recognized as that of the president. The tenant of Carthage Palace will have his hands free to make it the nucleus of a new political party. This would require President Kaïs Saïed's political ambition as well as his legacy.