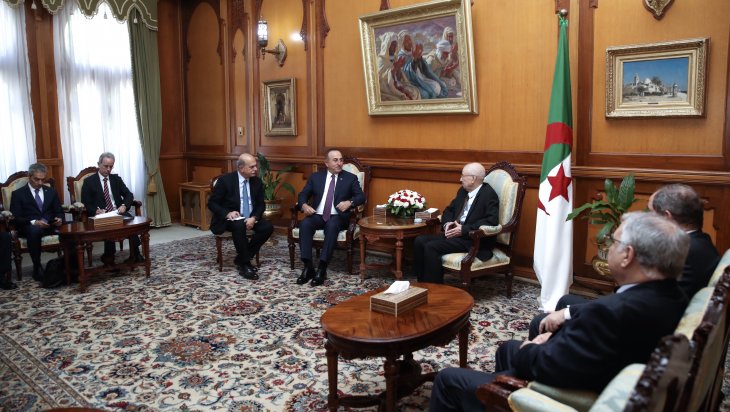 Last week’s visit of the Turkish Foreign Minister Mr. Mevlüt Çavuşoğlu to Algeria differs from the earlier visits either he or President Erdoğan made in 2014 and 2018 during the era of ex-President Abdel Aziz Bouteﬂika, when French-Algerian relations were considered sacred and any move toward another regional power drew a red line.

Over the last two decades of the ex-President Bouteflika’s rule, the French lobby was very powerful in terms of bilateral business cooperation, which had exposed the state institutions to some national security threats. The oligarchs had deliberately antagonized the Turkish-Algerian relations through the repudiation of some Turkish ofﬁcials on the protocol level, as theyused to force senior ofﬁcials to receive the simplest French ofﬁcial in Houari Boumediène airport in Algiers salons.

On the other hand, they were sending lesser ﬁgures to receive the Turkish ofﬁcials, even if the matter was related to those in high office. Algerians remember the infamous statement issued by then-Premier Ahmed Ouyahia (now in al-Harrach prison charged with corruption) when Turkish President Erdoğan addressed Franceʼs atrocities in Algeria, demanding it bear its responsibility for its imperialist past in Algeria.

In his statement, former Premier Ouyahia, continued that “Turkey had not supported Algeria in the Liberation War (1954-1962), and more than this, voted against the Algerian cause in the U.N.G.A. He further addressed then-Premier Erdoğan (without mentioning his name) saying: “Please don’t make business with the blood of Algerians,” in reference to the martyrs of the Liberation war.

On this stance, however, former-Minister of Information and Ambassador Abdelaziz Rehabi told the media that the Turkish government had filed a written apology to Algeria for voting against the independence of the North African nation from the French occupation, when the case was discussed in the U.N. in 1957.

He indicated that “what Algerians should know, is that in 1986 the Turkish government submitted a written request to Algeria for forgiveness and undersigned by the then-Turkish Prime Minister Turgut Özal, for standing against a U.N. Resolution for the independence of Algeria.” He further specified that the written apology was handed over to former-President Chadli Bendjedid by a Turkish envoy.

Nonetheless, this time it looks like the Algerian Hirak effect is touching not only on domestic politics, but has already showed some trends emerging in its foreign policy orientations  -- Turkey and Algeria share a common history as well as deep-rooted cultural and brotherly ties, despite the long political drought between Algiers and Ankara in their bilateral relations, due to cold war imperatives in the 70’s and mid-80’s.

Yet the coming of the AK Party to power in 2002 in Turkey changed Ankara’s MENA and notably North African and Maghreb foreign policy objectives and determinants, providing a new paradigm that is gaining trust among the local population across the region. A sense of change that was expressed for instance during the Algerian Hirak last Spring, appearing in slogans that read: “Algerians want a leader like President Erdoğan,” and asking President Erdoğan to lift the visa ban for Algerians to enter Turkey.

Thus this kind of rapprochement between the two countries under the AKP ruling government has gained momentum over the past years. The Friendship and Cooperation Agreement, which was signed during the visit of then-Prime Minister Erdoğan to Algeria in 2006, is considered a strong foundation on which bilateral relations are based.

Energy and construction constitute the main pillars of economic relations. In the economic field, bilateral relations have reached a satisfactory level. Turkey has 3.5 billion USD$ worth of investments in Algeria, which makes it one of the top investor countries and the largest foreign supplier of employment in Algeria.

Turkish construction firms under the leadership of the Turkish Cooperation and Coordination Agency (TIKA) have been working on valuable cultural restoration sites such as Ketchaoua Mosque and the Casbah neighborhood in the capital city of Algiers, and other Ottoman landmark sites in the country. The historical Ketchaoua Mosque underwent renovation and was re-opened to the public on 9th April, 2018.

Based on the Protocol signed between the Yunus Emre Turkish Cultural Center and Algiers University-II of Bouzaréah, the Cultural Center contributes to these bilateral cultural relations and provides Turkish language courses in Algeria-II University.

Recently Rönesans Holding partnered with the Algerian national energy company Sonatrach to develop a polypropylene production plant in the Ceyhan Mega Petrochemistry Industry Zone with a $1.2 billion investment. The proposed facility, which will become the first investment in the area, will feature a production capacity of 450,000 tones. Set to become operational in 2023, the facility will reduce the current deficit by $ 450 to 500 million each year.

During his visit in 2005 ex-President Abdelaziz Bouteflika suggested establishing a “Commonwealth of Ottoman States” under Turkey’s leadership. He seemed very enthusiastic about this idea as was Turkish former-President Abdullah Gül, then Foreign Affairs Minister in 2005.

In his most recent visit last week, Minister Mevlüt Çavuşoğlu met with the Turkish business community reiterating that Turkey ranks first for foreign investments in Algeria and that the resulting trade volume exceeds 4.5 billion dollars. He stressed determination to continue developing economic and trade relations between the two countries. He further noted that his meeting with Premier Noureddine Bedoui was fruitful and resolved to strengthen commercial relations with Algeria, “our second largest trading partner in Africa.”

Minister Çavuşoğlu also met with his counterpart Foreign Affairs Minister Sabri Boukadoum where regional and international issues were discussed; on that same day Ankara launched the Peace Spring Operation, an interesting element worth mentioning, as some Arab leaders and the irrelevant Arab League were condemning Ankara’s incursion in the Syrian territories -- Algiers did not issue any comment nor communiqué on this thorny issue; knowing Algiers has kept its position clear on the Syrian civil war by siding with the regime, enhancing its foreign affairs argument and line that Algiers would not get involved or interfere in any domestic affairs of the country.

Lastly a Memorandum of Understanding on Cooperation in the Field of Water Resources was signed, ensuring as Minister Çavuşoğlu stated, that we had the potential to further develop our bilateral relations in that arena. Later that day, Minister Çavuşoğlu was also received by the State Interim President Abdelkader Ben Salah again emphasizing the great importance attached to the stability and prosperity of Algeria, “a country with which we share a common history and  strong ties.”

Minister Çavuşoğlu’s visit has softened the diplomatic missteps of former Premier Ouyahia and liberal Francophone newspapers’ statements against Turkish officials and leaders. The relations between Ankara and Algiers are entering a new phase of public diplomacy in maintaining its crucial connection to the optimal functioning of regional politics.

Ankara’s new Ambassador to Algiers, Ms. Mahinur Ozdemir Göktas, would encourage this desire for warm relations between the two countries. Sometimes idealist diplomats make a contribution developed from the perspective of his/her country’s cultural, political, social, economic perspective, and which takes into consideration the merits of the host country’s perspectives with skillfulness and respect.