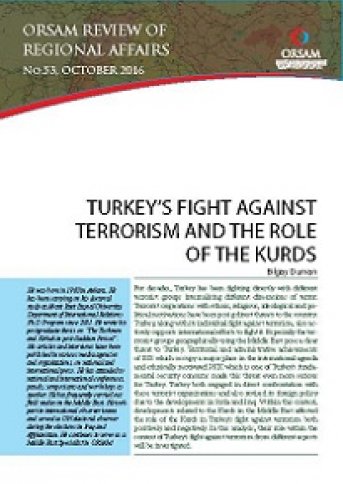 Turkey’s Fight Against Terrorism and The Role of The Kurds

For decades, Turkey has been fighting directly with different terrorist groups internalising different dimensions of terror. Terrorist orgasations with ethnic, religious, ideological and political motivations have been posi g direct threats to the country. Turkey, along with its individual fight against terrorism, also actively supports international efforts to fight it. Especially the terrrorist groups geographically using the Middle East pose a clear threat to Turkey. Territorial and administrative achievements of ISIS which occupy a major place in the international agenda and ethnically motivated PKK which is one of Turkey’s fundamental security concerns made this threat even more serious for Turkey. Turkey both engaged in direct confrontation with these terrorist organizations and also revised its foreign policy due to the developments in Syria and Iraq. Within this context, developments related to the Kurds in the Middle East affected the role of the Kurds in Turkey’s fight against terrorism both positively and negatively. In this analysis, their role within the context of Turkey’s fight against terrorism from different aspects will be investigated.