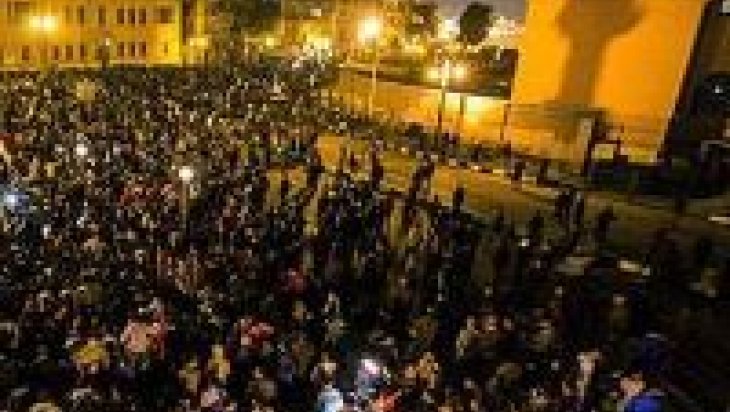 In Egypt, the court cleared all the charges over the killing of protesters during Egypt's 2011 uprising against former President Hosni Mubarak, ex-interior minister Habib al-Adly and six former top officials. In three cases, the court acquitted Hosni Mubarak and his ex-officials while in one case, the court decided time-out as well as dismissing the murder charges against Mubarak on a technicality. Thus, nearly all the charges linking Mubarak, his sons Ala and Gamal as well as a number of senior politicians and bureaucrats to several crimes were concluded in favour of the regime. Finalization of the prosecution process started after 2011 by dismissing the charges against Mubarak and declaration of Mubarak as unjudgeable aim to seal the past of the regime.

Since 2011, the prosecution had turned to a theatral process both because of the court’s approach and upgrading of the bureaucratic-authoritarian structure in a more severe form by the coup d’état. This theatrical judicial process will also be remembered as the most expensive trial in the Egyptian history in addition to its importance in Egyptian politics. Mubarak’s trial cost $15 million, while Mubarak spend his detention period all in military facilities such as the Tora Prison Hospital, Sharm al Sheikh International Hospital, International Medical Centre and al Maadi Hospital.

The ongoing protests in Egypt following Mubarak's resignation forced the Supreme Council of the Armed Forces (SCAF), which had difficulties to stabilize the country to take steps for the prosecution of a number of political figures. On March 2011, the court prosecuted a number of ex-officials around Mubarak. Thus, it decided to investigate the charges of killing protesters throughout the country between 25-31 January 2011, attempting to kill protesters throughout the country between 25-31 January 2011, committing crimes against public good, benefit and properties, corruption and embezzling millions of Egyptian pounds from state funds to spend on mansions.

On March 2011, the court decided to investigate the killing of protesters between 25-31 January 2011 that ended Mubarak’s tenure and indicted ex-Interior Minister Habib al-Adly and his six senior assistants for charges of ordering/abetting the killing of protesters throughout the country. At that time the court left Mubarak out of these charges. However, as a result of pressure from street demonstrations demanding accountability for Mubarak, Mubarak was added to investigation files as a co-defendant in the case on May 2011. The case on ordering/abetting the killing of protesters throughout the country was limited in many ways, for example the case only investigated the dates between 25-31 January 2011; left the period before 25 January and after 31 January out of the context. In addition, complainants demanded the public prosecutor to investigate 846 people’s death during the protests, while the public prosecutor accepted to include only 239 of them. The Court convicted Mubarak life in prison on these charges on 2012; however Mubarak’s defence lawyers objected the conviction by arguing that there was no-grounds designation of Mubarak without following proper procedures and then the court agreed on the objection and dismissed the charges on 29 November 2014. The other defendants were acquitted of all charges. Thus, Mubarak cannot be tried by court for the crimes that he committed against Egyptians.

In addition, Mubarak together with seven ex-officials was also investigated for “not taking necessary measures" and therefore “harming public goods and benefits”. They all were acquitted of all charges in this case. All the process in this case reveals that these people were investigated, not because they committed crimes against Egyptians, but they committed crimes against regimes by failing to stop protests.

In both cases as well as other trials after 2011, the most outspoken alibi was the lack of evidence. For example, despite all the photos, documentations and videos broadcasted in TVs, radios, newspapers, showing how police brutally committed crimes against unarmed people, the court acquitted polices charging use of excessive force and killing protestors for lack of evidence. The same approach was adopted in Mubarak’s trial as well as in other defendants’ cases. Civil bureaucracy was not cooperative on the cases and prevented investigation of evidences on prosecution process.

The same situation appeared in other trials on corruption, embezzlement and unlawful profit. The most notable example of this was the trial against Mubarak and his sons, Alaa and Gamal together with ex-Oil Minister Samih Fahmy on acquiring unlawful profit. The public prosecutor charged them with selling natural gas under market price to East Mediterranean Gas Company, owned by a businessman, Hussein Salim. According to charges, Hussein Salim obtained usurious profit from selling this gas to Israel. Hussein Salim also involved another trial on bribery against Mubarak and sons. In this case, Mubarak and his sons accused selling public lands in Sinai to Salim Hussein in exchange five villas in Sharm Al Sheikh. But also they were acquitted of these charges.

Hosni Mubarak was convicted only in the “mansions” case and was penalized three years for embezzling money from budget allocated to reconstruction of Presidential Palace on May 2014. Mubarak’s three-year sentence in the mansions case will be deducted from the period of his imprisonment since 2011; hence he won’t stay in prison for a long time. In conclusion, the acquittal of Hosni Mubarak together with ex-officials as well as his unjudgeable position has officially ended a period in Egypt.