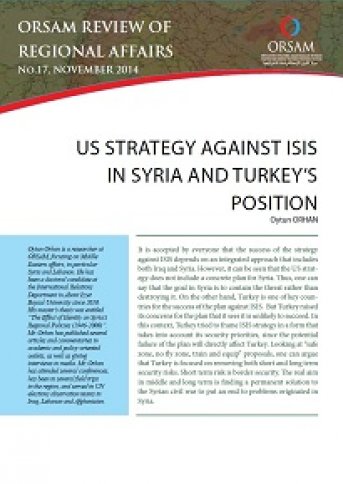 US Strategy against ISIS in Syria and Turkey’s Position

It is accepted by everyone that the success of the strategy against ISIS depends on an integrated approach that includes both Iraq and Syria. However, it can be seen that the US strategy does not include a concrete plan for Syria. Thus, one can say that the goal in Syria is to contain the threat rather than destroying it. On the other hand, Turkey is one of key countries for the success of the plan against ISIS. But Turkey raised its concerns for the plan that it sees it is unlikely to succeed. In this context, Turkey tried to frame ISIS strategy in a form that takes into account its security priorities, since the potential failure of the plan will directly affect Turkey. Looking at “safe zone, no fly zone, train and equip” proposals, one can argue that Turkey is focused on removing both short and long term security risks. Short term risk is border security. The real aim in middle and long term is finding a permanent solution to the Syrian civil war to put an end to problems originated in Syria.