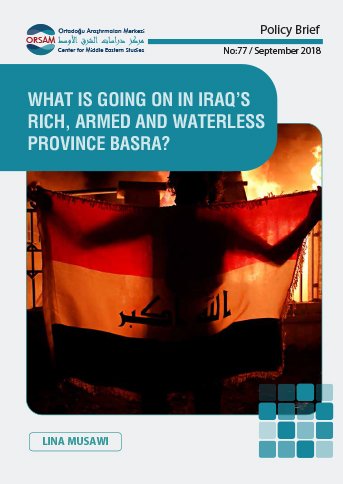 What is Going on in Iraq’s Rich, Armed and Waterless Province Basra?

On July 8, 2018, protests broke out in Basra, Iraq’s richest province. In Basra, where about 80 percent of Iraq’s total oil production is provided, the people have expressed their displeasure for the lack of basic vital needs such as intentional neglect towards their province, deterioration of services, widespread unemployment, electricity problem in the province with the highest temperature in Iraq and lack of suitable water resources for public use. All these did not happen in a short time. Behind the protests in Basra in August 2015, there exists a major neglect in terms of services in the province after the decision by the central government to adopt an austerity policy and the expenditure because of the war against ISIS, as well as widespread government corruption especially in the field of public service. Later on, the protests became a tradition repeated every year to express the displeasure of the people of Basra.
The sparks of the protests where hundreds of people poured into the streets to announce their demands in Basra in February 2016 continued in the province even in 2018, and also spread to other provinces such as Najaf, Misan, Dhi Qar, Karbala and Baghdad. The demonstrations, which lasted for more than a month in Basra, did not stop during the Greater Eid in August, and the Basra people spent the whole Greater Eid week in hospitals, not in the mosques, as about 15,000 people were diagnosed with poisoning due to the pollution in the potable and domestic water. According to the Health Control Branch Office in Basra, the chemical pollution rate in provincial water has reached 100% and the percentage of bacteria in the water is approximately 50%, and this risky situation has not existed in any Iraqi province before. While this humanitarian catastrophe is taking place in Basra, we witness the political controversies, mutual accusations and condemnations among government officials. Because of these set of tragic events, it is necessary to ask a number of questions to the real responsibility for this catastrophe.