What will a Biden Presidency Mean for Iraq? 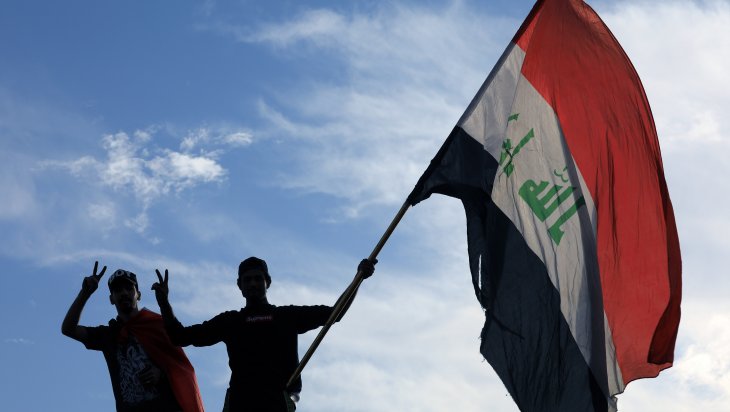 Since the US invasion in 2003, American presidential elections have been eagerly watched in Iraq, with any change in leadership likely to directly impact the country.
Former vice president Joe Biden is projected to be the 46th US president after beating Donald Trump in the race to the White House, and his presidency will open a new chapter in relations with Iraq.

Biden is no stranger to the country, having served two terms as vice president in the Obama administration with a focus on foreign policy. An enthusiastic supporter of the invasion in 2003, Biden was appointed by Obama to oversee US operations and diplomacy in Iraq.

In 2009, a multi-sectarian and moderate political party, Iraqiya, was founded by a Sunni leader, Rafe al-Essawi, and Shia secular leader, Ayad Allawi. The party challenged the then-prime minister Nouri al-Maliki's State of Law Coalition and won the 2010 elections by a narrow margin.

Even though Iraqiya got the most votes, Maliki became the prime minister again. At the time, Allawi claimed - based on comments from a senior US official - that Washington would not support a prime minister from Iraqiya on the grounds that Iran would oppose him.

It was alleged that this unnamed official was Biden, although other US officials have denied that negotiations were tilted in favour of Maliki. During this period, Biden devoted his time to creating an atmosphere and infrastructure for the withdrawal of US troops, to the degree that Biden visited Iraq twenty-four times between 2010 and 2012.

Soon after the withdrawal of American forces from Iraq in 2011, Maliki deepened Sunni-Shia tensions with an attempt to arrest Sunni leaders such as Rafe al-Essawi and then-vice president Tariq al-Hashemi in 2012, as well as fostering conditions for the rise of the Islamic State (IS).

In early 2014, IS captured most of the country, with many attributing the group's dramatic rise to exclusionary rule towards Sunnis and Kurds under Maliki, a security gap created by the withdrawal of US troops, and Iraq's military weakness.

The US did not take action until Mosul, Iraq's second-largest city, was occupied in June 2014. By that point, Biden realised that Maliki had to go, and supported the premiership candidacy of Haider al-Abadi. Although the US redeployed troops to Iraq as part of Operation Inherent Resolve in late 2014, it was too little, too late to combat IS.

Operations against the extremist group were largely carried out by Iran-backed militias within the Popular Mobilisation Forces (PMF) – an umbrella group also known as the Hashd al-Shaabi - who were loyal to Iran's Islamic Revolution Guard Corps (IRGC) Quds Force commander Qasem Soleimani. This, in turn, enabled Iran to increase its effectiveness on the ground.

The fight against IS was carried out with American military equipment and Iraqi funds - the PMF was included in Iraq's security framework and acquired legal status in 2016. In addition, Iran clinched power in Iraqi politics, with the pro-Iranian Fatah Alliance, formed by PMF leaders, ending in second place with 47 seats in the 2018 elections.

Recently, the Fatah Alliance spearheaded the expulsion of US troops from Iraq in parliament, while pro-Iranian militia groups within the PMF carry out regular attacks on US forces and facilities in the country.

Iran's Influence Could Grow
Biden's election victory may exacerbate ethnic and sectarian divisions concerning the US presence in Iraq. For the most part, Sunnis and Kurds largely support America's presence because of concerns about Iran's hegemony and the revival of IS, while a significant portion of Shia political groups, and all of the pro-Iranian Shia factions, oppose it.

This opposition significantly intensified after the killing of Quds Force commander Qasem Soleimani in a US airstrike in Baghdad on 3 January, 2020, on Trump's orders, with almost all Shia lawmakers voting in parliament to expel US forces.

Trump's 'maximum pressure' and sanctions against Iran, including withdrawing from the Iran nuclear deal, overlapped with Kurdish and Sunni expectations to minimise Iran's hegemony in Iraq, with the possibility of Biden reenacting the agreement raising concerns.

Trump's economic sanctions on Iran and pressure on pro-Iranian Iraqi militia groups have, to some extent, broken Iran's hegemony over Iraq. Kurds and Sunnis, therefore, would favor the continuation of American policy towards Iran, although many Shia groups will welcome Biden's election victory.

With Biden as president, Iran's influence in the country could grow, although immediate internal tensions in Iraq would likely decrease in light of a possible US-Iran reconciliation. Trump's policy of 'maximum pressure' against Iran led to attacks by pro-Iran militias on US forces and foreign missions, while assassination attempts against Iraqi activists escalated.

With Biden in power, this cycle of violence could wane, but increasing Iranian influence could trigger yet another rise in anti-government demonstrations that have been ongoing since October 2019.

Secession Scenarios Revisited
Many Iraqis are apprehensive about the role Biden could play as US president, given his key influence in the development of Iraqi politics since the 2003 invasion.

Biden, who was a presidential candidate in the 2008 US elections, caused dismay in Iraq that year when he proposed the establishment of Sunni, Shia, and Kurdish federate regions in the country so that the US military could withdraw without leaving "chaos" after the Iraq war.

Within the planning framework, Sunnis were to have a 20 percent share of the budget, and a connection group for Iraq's neighbors, including Iran, would be established. Although the plan is not expected to be implemented, it is essential in showing Biden's approach to Iraq. While many Sunnis who strongly opposed this plan 12 years ago are now more in favour of establishing a regional government, the Shia community strongly oppose it.

Indeed, it was claimed that Biden told Barzani in 2015 that there would be a "Kurdish state" in their lifetimes. During a 2017 meeting in Davos, at the end of Biden's term in office, Barzani invited him to Kurdistan, calling him a "friend of the Kurdistan nation".

However, despite his personal relationship with Barzani, Biden did not support the KRG's independence referendum in 2017 and argued that they should strengthen political unity and economic stability between Erbil and Baghdad. This approach does not mean that he will ignore the Kurds - he could well force Baghdad to revise its KRG policy by further strengthening Washington's relations with Erbil.

In the 2016 election campaign, Trump was determined to fight Iranian influence and Iran-backed forces in Iraq, although he reduced troop numbers stationed abroad as part of his policy of ending America's "endless wars."

In contrast, Biden can be flexible in combating Iran and Iran-backed parties that oppose the US military and diplomatic presence in Iraq. In the Biden era, at least, it seems unlikely that there would be a move similar to the assassination of Qasem Soleimani by Trump.

Although Biden says that he also wants to end "forever wars," he also supports the continuation of the American presence in Iraq and other conflict areas, but will likely reduce it. The rise of IS after the US withdrawal in 2011 may deter Biden from withdrawing altogether though, potentially causing problems with pro-Iran Iraqi militias.

This article was published in The New Arab website under the title of “What will a Biden presidency mean for Iraq?​” on November 10, 2020.