Where is Tunisia Heading? 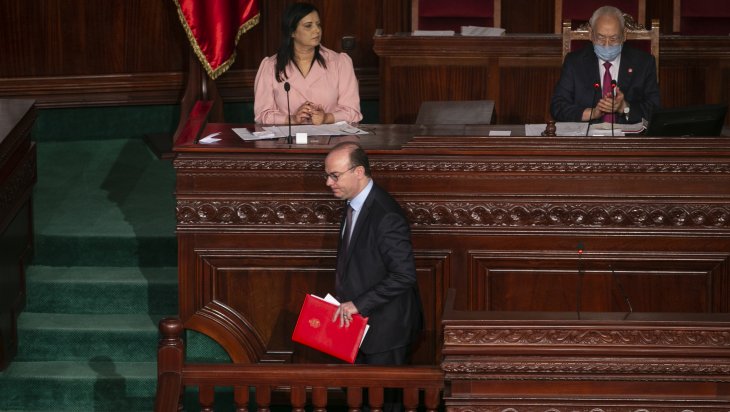 The party fell short of a comfortable majority (51%) and lead, as a result Al-Nahdha’s Consultation Counsel agreed to join a coalition government, after long political manoeuvre and parties combines, the party basically nominated an “independent” premier, but he failed to win support at parliament, leaving finally President Kaïs Saïed to appoint Al-Fakhfakh as Premier and form a fragmented coalition.

A parliamentary bloc of 105 MPs. from three main parties, Al-Nahdha, Qalb Tounes, and Al-Karama as well as with some independent MPs filed a no-confidence motion vote against Caretaker Premier Al-Fakhfakh government.

He was appointed prime minister by President Kaïs Saïed, becoming Tunisia's eighth Prime Minister since the spark of 2011 "Jasmine Revolution" that ousted former president Zine Al-Abidine Ben Ali, provoking a political Tunisiami that spread across MENA region. Al-Fakhfakh served as minister of tourism in 2011 before becoming minister of finance from 2012-2014.

Last month, an independent MP published documents, showing that Al-Fakhfakh owned shares in companies that had secured deals from the state worth $15m. Caretaker Premier Al-Fakhfakh denied doing anything improper, and promised to step down if he is indicted.

Now President Kaïs Saïed has ten days to appoint a new prime minister, who will need sixty days to form a new government and obtain a confidence vote from the parliament. According to the Tunisian Constitution.

The ongoing political and institutional developments coincide with attempts by the secular opposition to get a vote of no-confidence against Speaker of the House Sheïkh Rached Al-Ghannouchi, the leader of Al-Nahdha. Those MP secular groups in the Tunisian parliament are: Al-Kotla Democrateya party (40 MPs), Tahya Tounes party, Al-Islah Al-Watani party (15), Al-Kotla Al-Wataneya party (9) and the Free Doustorian party (17).

Thus Tunisians have been very worried because of Covid-19 pandemic and their main daily basis legitimate concerns are the purchasing power, and not whether Tunisians will have a government or not. Despite the persistence of the Tunisians, whose political and socioeconomic demands are their immediate priority that they would never back down. Yet the ongoing political and ideological dispute between the parties from across Tunisia's political spectrum is not making Tunisian voters foolish.

In fact, last week resignation of Caretaker Premier Al-Fakhfakh, and the ongoing ideological fight between Al-Nahdha and the Free Doustorian party are pushing even further for national political division in Tunisia.

To many analysts this was the first political crisis following the assassination of two opposition leaders, Choukri Belaïd and Mohammed Brahmi.

Despite this political and ideological animosity of the secularists and their “godfathers” in the region, the political maturity of Al-Nahdha party leader current House Speaker, Sheïkh Al-Ghannouchi and late President Caïd A-Sebssi have had helped the country to not head into political violence, lately the Tunisian Speaker of the House has been defending vehemently Qalb Tounes party to be in the government in order to reconcile Tunisians with politics and civility.

This odd couple - Al-Nahdha-Qalb Tounes - in Tunisia’s politics pushes for change that includes political forces, elite, and independent forces who are not ideologically on the same path.

On this stance, one might ask, “why not?” and where is Tunisia heading?

Tunisia and Tunisians are further down the road since the successful story of their "Jasmine Revolution" in 2011. This time, however, Tunisians are eagerly looking for real change, and results that will change their lives, not for continuity, the anti-revolutionary camp’s version of change or worse, the deep state’s version of change and Ben Ali’s system recidivists. Today Tunisians know who are the obstructionists of the change that Tunisians want, and the rejectionists that Tunisians don’t want to see.

Since 2011, Al-Nahdha party was in the eye of the storm and in the center of the Tunisian political debate, raising fears for some and hopes for others. Yet nine years later the party today is struggling to prioritize its objectives and, to some extent, answering questions that disappointed his sympathizers and even some leaders who are leaving the ship.

Tunisians are clearly asking for a second revolution of thought within Tunisia, as well as making a deal with the neo-Islamists post-Rached Al-Ghannouchi, the Speaker of the House, whose political career and militancy are behind him. This could create a new era of thinking in the Tunisian political elite, which would allow public opinion to readjust its socio-political demands to trust President’s Kaïs Saïed administration, so far did not deliver yet.

Nevertheless, the obstacles are difficult to overcome. In the complex Tunisian constitutional system (which is a semi-presidential system) good intention and serving the country don’t rhyme with the system’s political reality, Tunisian politicians and elite today enter into a gladiatorial fight against the system’s sharp machine that is mainly guided from Paris and Abu Dhabi. Hence, the current political division between the republic President in Carthage Palace and the House (Parliament) Speaker in Bardo Palace on one hand, and the lefty media and radical labor Union members of the powerful UGTT labor Tunisians union who are to the contrary enhancing the deep state’s and the counter-revolution’s actors means and actions.

Making the storyline goes between the Islamists “Political Islam” and the secularists on one hand, and the oligarchic regime on the other. As if the country’s societal imperatives are politically constants and economically stable. Yet, the post-Jasmine peaceful uprising outcome generated a political paradigm that people are in the middle ground between counter-revolutionaries and radical dystopian groups. An alibi that authoritarian regimes in the region and their masters in western countries have been using it to crush any credible opposition to their thrones: like in Syria, Yemen and Egypt.

The narrative of the People’s desire for change and rupture in Tunisia like in the entire MENA region is to bury the dystopian ideology and the "Prince"’s political paranoia.

In point of fact, Tunisians are trying to remove the remain of tyranny, oligarchy and eventually establish democratic system in their place. But so far, they are facing resistance domestically and regionally from anti-reform and prosperity camps, who are leaving the region in doubt and anarchy instead, as soon as Tunisians get the chance to speak up peacefully the outcome is flourishing. They are living their renaissance, a renaissance of polity construction, and not of political parties nuisance nor regional powers destruction and envy.