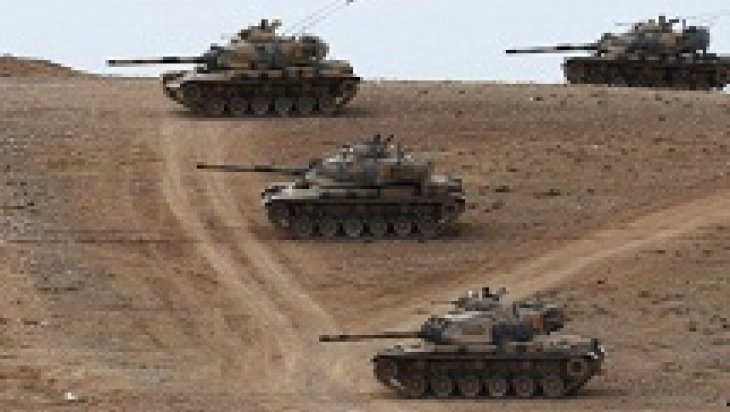 Turkey’s participation in the fight against DAESH by allowing the coalition in its military bases will contribute greatly to the operations against the terrorist group and also bring forward the problem that who will dominate the safe zone in the north of Syria that is to be cleared of DAESH.

DAESH, which is controlling approximately 90,000 square kilometers of area in Iraq and Syria, directed its attacks mostly against the opposition and the Kurds in the north of Syria rather than the Assad regime. These attacks have so far not been hindered in one way or the other. Since the US-led coalition refrains from supporting groups other than PYD, DAESH moved its forces to the opposition controlled areas as it fled from the air strikes.

The factors behind the coalition-PYD alliance are, the worries that the opposition groups might further radicalize and the Western perception that PYD is a secular organization fighting against DAESH. In addition, there are claims that the coalition helps PYD to establish a corridor along the Turkish border and unify the three cantons.

Barzani is Also Disgruntled with PYD
Ankara’s move to allow the coalition in its military bases and America’s partial recognition of Turkey’s position vis-à-vis the Assad regime and the opposition will hinder PYD’s ongoing expansionist and monopolistic strategy in the north of Syria. Turkey’s participation in the coalition will ensure that the opposition will receive aerial support, which was only given to PYD. At this stage, it occurs to one’s mind that the opposition, which receives no air support, is forced to withdraw in the face of the DAESH assault from the areas it captured from the regime without any air support. Recently, PYD and Burqan al-Firat, an opposition fraction, has captured Tel Abyad with the coalition’s air support. That is to say, the US provided air support on the condition that it is PYD that requires. Yet, when PYD started to alter the region’s demography, Turkey reacted with great discomfort and the US warned the group about the issue.

It is uncertain as to how US will approach PYD now that it is considered to be closer to Turkey’s position regarding the opposition. Nevertheless, it is a fact that Turkey does not want PYD in the safe zone. Having unified Kobani and Jizire, PYD will be Turkey’s sole respondent in the Syrian border, if it also captures the region between Kobani and Afrin (the planned safe zone).

Given the plans about deploying the opposition and settling the asylum-seekers in the safe zone, there is no insurance that PYD will not seek to expand towards this area. Turkey is not alone in criticizing PYD, which pursues ethnic discrimination and allows no other political movement other than itself and no military group other than YPG. At the same time, Massoud Barzani, President of the Iraqi Kurdish Regional Administration, constantly criticizes PYD’s monistic policies on every occasion.

PYD’s Political Pragmatism
It is highly likely that the US will keep PYD out of the safe zone for ensuring Turkey at a time when the latter allows the coalition in its military bases and comes to terms with the US for a “safe zone”. As the concerns about the agreement and its implementation go on, Wall Street Journal, a prominent US daily, published a controversial article. It claims that Turkey and the US have agreed that the PYD will be kept out of the safe zone that is to be cleared of DAESH. Also it is emphasized that PYD has promised the US that it will aid the coalition and the moderate opposition in the fight against DAESH, however has undertaken no commitment not to enter the safe zone.

Attempts to Move Closer to Iran
PYD’s accomplishments in Syria have enhanced its nationalistic appeal among the Kurds on the one hand and boosted its popularity in the West as a group fighting against DAESH on the other. Today, PYD has established diplomatic relations not only with the US but also with other European countries, such as France and Italy. In addition, PYD’s ideological and military associate PKK’s breach of cease fire in Turkey has caused condemnation on the part of the US and other Western countries, which approve Turkey’s operations.

Being in a position of the sole winner in the Syrian civil war, PYD will not harm the relations with its ally, the US; therefore it will not seek to unify the third canton risking Turkey’s opposition and America’s disapproval.  Rather, it will most likely move towards Iran in order to convey a message to the US and Turkey for it is aware that otherwise all its gains since 2011 will be wasted.

PYD’s policy to establish an autonomous administration along the border in the north of Syria is a red line for Turkey. The US and Western countries’ concern for PKK’s breach of cease fire in Turkey may weaken PYD’s position in the West. Furthermore, if PYD, which is not deemed a terrorist group in the world, opposes America’s policies, it will lose its ‘ally’ and harm its very own existence.

Seeing that train and equip program falls short of success, the US has recognized Turkey’s concerns about the border as the latter has opened its military bases and the former has come to understand that ignoring the opposition in the north of Syria will fuel the instability. It is unlikely that the US approach will surprise Turkey, since its explicit support for the coalition on the condition of its red lines is on the table. No doubt, PYD will refrain from being cornered in this equation and give up its usual approach to the safe zone issue.

Consequently, PYD, whose pragmatist policies brought about regional accomplishments, will not vocally utter its discontent with the safe zone, even though it wants to capture the territory between Afrin and Kobani.

The original of this article was published on Yeni Şafak website.