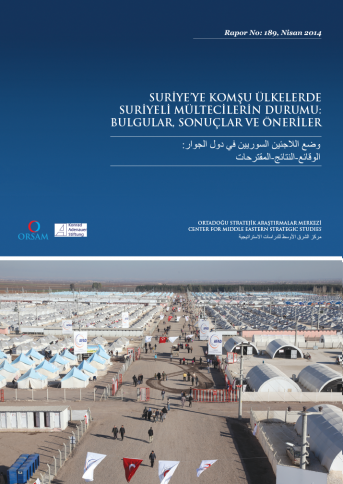 The Situation Of Syrian Refugees in the Neighboring Countries: Findings, Conclusions and Recommendations

The popular uprising, which started with civilian and peaceful demonstrations in Syria on 15 March 2011, increasingly turned into a civil war. In this very environment of instability, the Syrian people started to migrate from their homes, villages, towns in search of security. There is both internal and external migration in Syria. As from April 2014, 3 million Syrian refugees; 1.000.000 of whom to Lebanon, 800.000 of whom to Turkey, 600.000 of whom to Jordan, 220.000 of whom to Iraq and 140.000 of whom to Egypt, in total left their homes and took shelter in neighboring countries. There are millions of Syrians who do not live in camps, live in houses in neighboring countries through their own means and the number of whom are not known precisely. On the other hand, the situation is much worse in terms of the internal migration. It is known that 1500-2000 people a day leave the country, or that they migrate to other regions they find more safe within the country. Considering that more than 75 per cent of those who fled the country are women and children, scale of the tragedy in Syria within the framework of the forced migration is understood beter.

The amount of aids arriving in Syria from various countries and institutions meets only 54% of the aid required for forced migration. However, the Syria problem is neither only the problem of this country, nor only the problem of the Middle East. The Syria problem is an issue of the international system, and the humanitarian tragedy in this country and forced mass migrations caused by this tragedy pose a threat for peace and security of the whole international system. Within this framework, considering only neighboring countries as the sole addressee of the problem and sort of leaving them alone at this point might further worsen the situation. Therefore, all actors which are a part of the international system need to get more involved in the problem, and they need to provide more support for the neighboring countries which are first-degree addressee to the forced migrations caused by the current crisis in Syria.