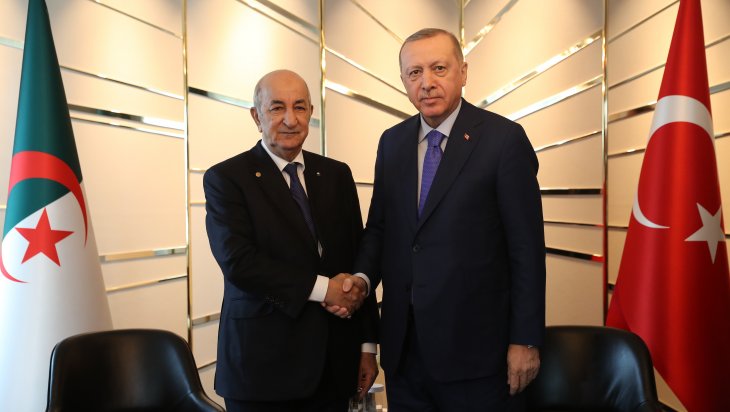 Foreign Minister Mevlüt Çavuşoğlu paid his second official visit to Algeria in the last three months; however, this visit represented a departure from earlier visits made by he and President Recep Tayyip Erdoğan to the North African nation since the removal of President Abdelaziz Bouteﬂika, whose foreign policy was marked by a focus on French-Algerian relations in which any move toward another regional power was limited by a red line.

Over the last two decades of Bouteflika's presidency, the French lobby was very powerful in terms of bilateral "business" cooperation, which exposed the country's state institutions to a certain number of threats to national security. The oligarchs have deliberately antagonized Turkish-Algerian relations, with the Algerian public taking note of an infamous statement issued by then-Premier Ahmed Ouyahia – now in prison charged with corruption – that criticized President Erdoğan's having highlighted Franceʼs atrocities in Algeria, demanding the country take responsibility for its colonialist past in Algeria.

In his statement, former Premier Ouyahia stated that: "Turkey didn't support Algeria in the Liberation War (1954-1962) and more than this, voted against the Algerian cause in the U.N. General Assembly," addressing then-Prime Minister Erdoğan, without mentioning his name, by adding: "Stop making capital out of Algeria's colonization," in reference to the martyrs of the Algerian Liberation War.

Regarding this stance, however, former-Minister of Information, Ambassador Abdelaziz Rehabi, told the media that the Turkish government had filed a written apology to Algeria for voting against the independence of the North African nation from the French when the case was discussed in the U.N. General Assembly (UNGA) in 1957.

He said, "What Algerians should know is that in 1986, the Turkish government submitted a written request undersigned by the then-Prime Minister Turgut Özal asking for forgiveness for standing against a U.N. resolution on the independence of Algeria." He further specified that the written apology was handed to former President Chadli Bendjedid by a Turkish envoy in person.

Nonetheless, currently it looks as though the Algerian Mosaic Hirak, the protests that saw Bouteflika's removal from power in 2019, has touched upon not only domestic politics but seems to be showing signs of a shift in the orientation of the country's foreign policy, with the new Algerian administration eager to polish up its prestigious diplomatic ties and put an end to the era of wait-and-see.

A common history
Turkey and Algeria share a common history as well as deep-rooted cultural and brotherly bonds, despite a long political drought between Algiers and Ankara in bilateral relations, which emerged due to the imperatives of the Cold War in the '70s and mid-'80s. Today, both countries are facing the problems posed by phenomenons such as mass migration and the arrival of radical armed groups on their borders, which pose a real threat to their national security and political stability.

Yet with the coming to power of the Justice and Development Party (AK Party) in 2002, Turkey changed its foreign policy stance in North African and the Maghreb, offering a new paradigm that involved gaining trust among the local population across the region. This sense of change was expressed during the Algerian Hirak, for instance, manifested in placards that read: "Algerians want a leader like President Erdoğan," and asking Erdoğan to lift the visa ban for Algerians to enter Turkey.

On this issue, Ankara has just adapted its visa policy to allow visa-free access to Algerians under 15 and over 65 years old.

The Algerian-Turkish rapprochement, which first emerged under the AK Party administration, has gained momentum over the past years. The Friendship and Cooperation Agreement, which was signed during the 2006 visit of then-Prime Minister Erdoğan to Algeria, is considered a strong foundation upon which to base bilateral relations.

Energy and construction constitute the main pillars of economic relations. In the economic field, bilateral relations have reached a satisfactory level. Turkey has $3.5 billion worth of investments in Algeria, a number that it seeks to excel, which makes it one of the top investor countries and the largest foreign supplier of employment in Algeria.

Turkish construction firms under the leadership of the Turkish Cooperation and Coordination Agency (TİKA) have been engaged in invaluable cultural restoration projects on sites such as the Ketchaoua Mosque, the Casbah neighborhood of the capital Algiers and various Ottoman landmarks across the country. The historical Ketchaoua Mosque was reopened to the public after the completion of renovations on April 9, 2018.

Based on the protocol signed between the Yunus Emre Turkish Cultural Center and Algiers University-II of Bouzaréah, the cultural center contributes to these bilateral cultural relations and provides Turkish language courses in Algiers University II.

In terms of cooperation on energy, Rönesans Holding has partnered with Algerian oil and gas company Sonatrach to pump $1.2 billion of investments into the development of a polypropylene production plant in the Ceyhan Mega Petrochemistry Industry Zone. The proposed facility, which will constitute the first investment in the area, will oversee a production capacity of 450,000 tons. Set to become operational in 2023, the facility will reduce the current deficit by $450 million-$500 million each year.

During the 2005 visit of former President Abdelaziz Bouteflika to Turkey, the leader suggested establishing a "Commonwealth of Ottoman States" under Turkey's leadership. He seemed very enthusiastic about the idea, as was former President of Turkey Abdullah Gül.

Last fall, Çavuşoğlu reiterated during a visit to the country that Turkey ranked first in terms of foreign investments in Algeria and that the resulting trade volume had blossomed to $4.5 billion. He stressed a determination to continue developing economic and trade relations between the two countries. He further noted that his meeting with Premier Noureddine Bedoui had been fruitful and resolved to strengthen commercial relations with Algeria, which he referred to as: "Our second-largest trading partner in Africa, a country with which we share a common history and strong ties."

A memorandum of understanding on cooperation in the field of water resources was signed, ensuring, as Minister Çavuşoğlu stated, that the countries had the potential to further develop bilateral relations in that arena.

Çavuşoğlu enjoys positive visit
Minister Çavuşoğlu's visit last fall mitigated some of the effects of former premier Ouyahia's diplomatic faux-pas as well as the concerns of a certain number of secular Francophone newspapers critical of Turkish officials and leaders. The relations between Ankara and Algiers has entered a new phase of public diplomacy and cooperation in maintaining its crucial connection to the optimal functioning of regional politics.

The trade volume between the two countries in the first 10 months of 2019 reached $2.2 billion: $1.6 billion in terms of exports and $0.6 billion in imports, with Turkey's investment in Algeria hitting $3.5 billion. In 2018, Algeria became Turkey's second-largest trading partner in the African continent.

Çavuşoğlu's visit has enhanced the close relations enjoyed by the two countries, and he was warmly received by his Algerian counterpart, Sabri Boukadoum, as the two discussed the new dynamic in Turkish-Algerian relations as well as the latest developments in Libya. Çavuşoğlu was received by President Tebboune, who invited his Turkish counterpart Erdoğan for a state visit.

Algeria's Libyan agenda
In the case of Libya, Algiers wants to prevent the country from becoming a failed state or being overrun by militias, with the new Algerian president having quickly donned his commander-in-chief uniform, showing regional powers that Algeria would no longer allow chaos on its borders.

Both capitals' new ambassadors are eager to encourage this desire for warm relations and seek to kindle cooperation in commerce, tourism, culture and capacity building with civil society and academic actors.

Sometimes idealist diplomats make a contribution by developing their country's cultural, political, social and economic capital, taking into consideration the merits of the host country's perspectives with skilled diplomatic effort.

This article was published in Daily Sabah website under the title of “Algeria-Turkey make remarkable rapprochement in skillful diplomatic moves” on  January​ 21, 2020.