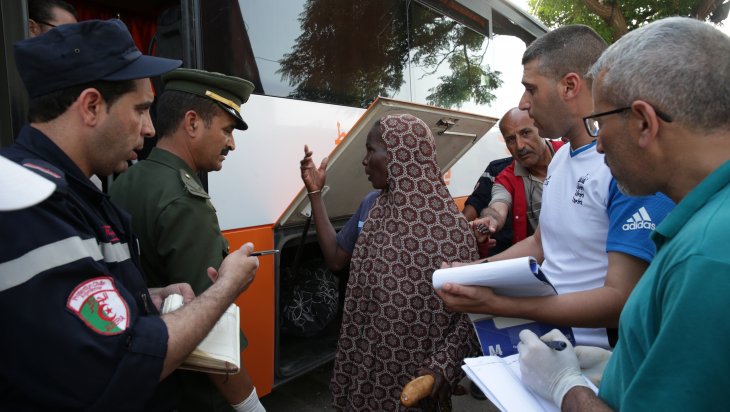 Since 2013, the Algerian authorities have expressed concern about migrants settling down in the southern border provinces of Tamenrassat and Béchar and, the Committee of Coordination has been collecting data and statistics regarding their increasing numbers. Furthermore, it has been coordinating with the Malian and the Nigerian governments to set up a repatriation operation for migrants regulated by the local authorities and the Algerian Red Crescent.

According to Algerian security services and local authorities, a large number of these illegal immigrants come from three neighboring countries (Mali, Niger and Chad), this is according to data communicated by the National Gendarmerie between 2012-2017.

Irregular migration
The migrants issue has become one of the main concerns of the Algerian authorities over the last decade. The application of the residency conditions of the Law on Foreigners (from 2008) residency conditions in Algeria has shown limitations, including the principles of non-refoulement of migrants in an irregular situation in Algeria. The process of collective repatriation is systematically activated when migratory flows threaten public order and national security. The process of regularization and naturalization is difficult.

This issue remains problematic, with real growth estimated to be at 2.3% due to the Covid-19 pandemic and the GDP is expected to fall 5.2% in 2020. This is a serious financial crisis which the country is going through, and the healthcare pandemic (Covid-19) crisis is eating the state budget. Algeria is trying, by all means, to substitute money transfers with the investment of the Algerian diaspora and the integration of national skills abroad in the process of local development in particular, following President Abdelmadjid Tebboune’s new economic bold measures and, encouraging Algerian investors abroad to invest broadly in Algeria.

The mobility of Algerian skills, however, is regarded as a brain drain phenomenon and recent data attest to an acceleration in the migration of highly skilled workers, including engineers and doctors. The need to put in place measures to curb these leakages is necessary because Algeria is, despite itself, involved in financing skills training for third countries.

Adding the other category infamously called “haragas” (illegal immigrants in European countries), Algeria often feels pressure from the E.U. to secure its southern and eastern borders and keep migrants and refugees far from Europe’s shores in the aftermath of the security and political vacuum in Mali, Niger and Libya. Meanwhile, the country continues to face tough social demands that remained unresolved for decades, i.e., the steady drain of its young people fueled by a desperate optimism for a better life elsewhere.

Last winter, the government grasped that “haragas” are a serious matter and the result of successive governments’ failure to create a viable public policy for employment, housing and sustainable education. Following the calls of the peaceful Mosaic revolt, the Hirak has given a ray of hope to thousands of young men and women to sustain their revolt against the corrupted and bankrupt regime and its incompetent successive governments. According to news reports during the first three months of the Hirak, the number of the “death boats” crossing to the southern Euro-Mediterranean countries like Spain and Italy, and eventually to France had dropped down. Yet recent reports are showing the opposite because of the current socioeconomic stagnation. People are losing patience.

"Partially Open Door" Policy
Algeria is part of the 1951 Convention relating to the Status of Refugees and its 1967 protocol. As a member of the African Union, it is also part of the 1969 A.U. Convention. Despite these international refugee conventions, Algiers has yet to establish a comprehensive national asylum system with the UNHCR, rather than the Algerian government undertaking refugee status determination (RSD) under its mandate.

In 2004 Algeria ratified the International Convention for the Protection of Migrants. This convention, however, makes no distinction between legal and illegal migrants. According to a post on the UNHCR website, "they also ratified the Geneva Convention regarding asylum seekers and refugees, when in fact Algeria is not even allowed to grant refugee status since it is the United Nations High Commissioner for Refugees that holds that authority."

Officially it is estimated that over 4,000 Palestinian refugees live in Algeria, while an additional 111 sub-Saharan African refugees have been recognized by the UNHCR in 2009, according to its bureau in Algiers.

In summer 2017, then-prime minister Abdelmadjid Tebboune, declared that he would seek measures for the benefit of migrant Black-Africans. He said, "Each refugee who is present in Algeria, will be accepted and will have the opportunity to work, while others will have an understanding with their respective governments for repatriation based on government exchange with Mali, Niger and Nigeria.” Premier Abdelmadjid Tebboune told the Algerian media as he explained that "It is the best way to solve this issue.”

Having ratified most of the international conventions on migration, Algerian legislation has incorporated most of the clauses that must contribute to protecting the rights of migrants, whether they are Algerians abroad or foreigners in Algeria. For the implementation of these provisions, Algeria presents and reports regularly to the United Nations supervisory bodies.

In addition to these official reports, Algeria is also bound by regional conventions and bilateral agreements, with countries where there is a significant density of the Algerian community abroad. Mixed commissions are established for the treatment of priority issues either in the context of bilateral consultations or regional bodies (African Union, Arab League, including AMU (UMA), or AMU-Euro-Mediterranean countries, (Group 5 + 5).

The numbers simply continue to rise and the obstacles to the solution of the crisis remain far out of reach.  The country does not have any migrant policy, nor does it have the means of assessing the demographic and economic challenges. However, as an example, Turkey has done an excellent job in hosting and providing protection for millions of Syrians and other migrant nationalities from the region, has received praise for its efforts by the international community and from the current U.N. Secretary General, former UNHCR Commissioner and the INGOs (international non-governmental organizations). The Turkish government is simply offering protection within a legal framework to the Syrian migrants whom it views as "guests", not fully refugees. As such, its programs and policies can serve as an excellent model which Algeria would do well to follow.

If pursued, the Turkish model could work for the Algerian authorities, and these long-term obstacles would be addressed sufficiently to contain the potential fall-out of rising awareness and need for protection. Eventually such policies, if instituted, could provide structure for an integration process for migrants and reduce the risk to social cohesion in southern border cities driven by conflict in Mali and poverty in Niger.

In this matter, the Algerian government could adopt several measures, including the compulsory registration of all migrants from the Sahel, Syrians and others. There are about 24,000 registered Syrians, according to the Algerian Foreign Citizens Office. Under the rules of registration, the migrants would then have access to free health care and food assistance services provided by local authorities in coordination with the Red Crescent, and local NGOs.

The proposals for protection promised by the government measures will provide legal recourse for migrants to get access to healthcare and social housing, and may help reduce racial tensions in the country, and can work effectively through community initiative projects in coordination with local authorities and NGOs.

Since human rights and INGOs (international non-governmental organizations) have called on the Algerian government to protect migrant rights, these suggestions may be intended to appease those groups whatever the underlying intentions.  However, human rights protection is desperately needed for the country's migrant population.

What prospects are there for Algeria?
Algeria was expected to join the Global Compact on International Migration by the end of 2018. Similarly, the production of data on international migration indicators, recorded in the 2030 Development Agenda, would also make it possible to observe migration flows to and through Algeria and the evolution of remittances to and from Algeria, as well as skills mobility and  return or relocation of refugees.

Finally, the question of migrants in Algeria or even Algerian refugees abroad remains unresolved. An Algerian law motion was outlined a few years ago and this law has not been presented by the government to the parliament. Meanwhile the majority of foreigners in Algeria are migrants (60%) supported by the UNHCR in terms of aid and protection, the refoulemement policy of illegal immigrants remains a thorny legal issue that Algeria does not need to add to its national security dilemma and economic crisis check list and the country faces major national security challenges on its southern and eastern borders and a stifling economic crisis.