Algeria’s Position on the Skhirat Accord: A Disabled Solution 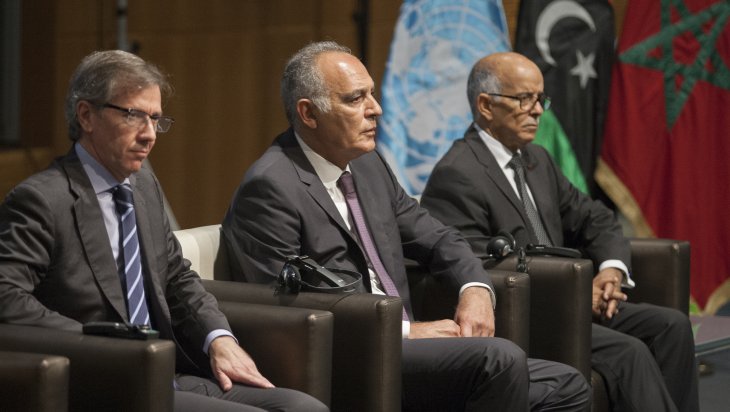 Algeria has been presented as a regional mediator for a long time. The leaders in Algiers, military and civilians alike, are not worried only about the 615 miles that Algeria borders with Libya, but they are concerned about the long southern borders with Mali and Niger. Early in the Libyan crisis, Algeria dealt with a national security matter that shaped its fearful intelligence organization structure (ex-DRS), following the terrorist attack in January 2013 on gas facility installations operated by the Algerian Oil Company, Sonatrach and the British Petroleum Company in Aīn Amenas, Illizi.

This wake-up call has obliged Algiers to establish contacts for peace talks in the fratricidal Libya war, supporting former U.N. special envoy initiatives to relieve the tension between the Libyan belligerents. In 2015, in the Moroccan city of Skhirat, Libyan political factions signed a U.N.- deal. Known as the Skhirat Accord, the agreement was supported by the U.N., Tunisia, Egypt and Algeria. The accord did not break the political deadlock in Libya, despite the neighboring states' wishes to keep the agreement as a basis for dialogue.

At that time, Algeria was facing a serious leadership question that led to the resignation of the ex-president, Abdelaziz Bouteflika. Meanwhile, the new administration in Algiers is creating new conditions considering its active and preemptive new diplomacy. This is using a paradigm implemented by president Abdelmadjid Tebboune, launching a new framework for negotiations between the main political actors in the Libyan conflict.

Algerian officials argue about Algeria's position on resolving the Libyan crisis, based on respect for the free will of the Libyan people and the U.N. Security Council resolutions. Yet Marshal Haftar is the de facto leader in the east of Libya supported by the Tobruk Parliament, led by Aquila Salah. In a surprising statement, Khalifa Haftar declared himself as the military leader and Libya's strongman, refuting the Skhirat Accord.

Libya has three centers of power, the Presidency Council (PC), which has been based in Tripoli since March 2016 and is headed by Fayaz A-Sarraj, a former member of the Tobruk Parliament. According to the Skhirat Accord, the Presidency Council presides over the Government of National Accord (GNA), also based in Tripoli. The GNA should be endorsed by the Tobruk-based House of Representatives (HoR).

The U.N Security Council had, however, warned in advance that the Skhirat Accord remained the only viable framework for ending chaos and anarchy in Libya. Five years later, Libya is in a political deadlock. Algeria reiterated its full support for the legitimate government, has called for comprehensive and sustainable political solution through the U.N-backed inter-Libyan dialogue, and, again, is urging all away from any form of foreign interference to ultimately put an end to the armed conflict.

In a statement the Algerian Foreign Affairs Ministry, “stressed Algeria's full support and solidarity with the Libyan people for peace, security, development and cooperation with all their neighboring nations.” The Foreign Affairs Ministry said in another statement that, on Thursday, Algerian Foreign Minister Sabri Boukadoum phoned his counterparts in South Africa, Libya, Tunisia and France to discuss the Libyan crisis and the Covid-19 pandemic’s political and economic repercussions. Lately, Algiers has received political delegations, as the Algerian government discussed the military escalation in Libya with the foreign ministers of Turkey, Egypt and Italy. This has been done to emerge as a credible broker between the main two Libyan belligerents, the GNA and the LNA.

Yet the latest developments on the ground are changing the conflict’s elements and the balance of powers equation. The GNA forces have moved from a defensive strategy to an offensive. A-Sarraj’s forces captured five strategic cities from Haftar’s forces in the western part of the country and GNA forces, reportedly, seized control of Al-Watiya military base, the largest base in the country. This will be a game changer in the ongoing Libyan armed conflict.

The Algerian president regretted the LNA leader, Khalifa Haftar’s decision slamming the Skhirat Accord, saying that, “we will not abandon Libya and its people.” “And there is no solution in Libya without Algeria,” he told the Algerian media.

Last Winter, the President of the Libyan Government of National Accord, Fayez A-Sarraj, spoke with the Algerian president on the developments in Libya. Algiers showed good will to ease the tension at first before bringing all the belligerents to the table. It is worth mentioning that the Algerian-Turkish rapprochement has made remarkable changes in the conflict diplomatically and militarily on the ground, despite the concern of the Pro-Haftar axis led by Abu-Dhabi. At the time, Ankara and Moscow, with the help of Algiers, had pushed forward to take the GNA and LNA leaders to Moscow to sign a cease-fire but Haftar ran away under pressure from the Abu Dhabi axis.

Later Algeria imposed itself as a serious middleman in the Berlin Summit, while it has been trying to fill the regional political vacuum that has been left for Saudi Arabia and United Arab Emirates on the one hand, and to foreign former colonial countries in the region on the other, i.e., France and Italy. France and Italy are in full disagreement on the migrants’ question and the Libyan dossier. On the latter, Rome is seriously concerned about the conflict’s ramifications in the southern bank of the Mediterranean.

Algiers does not see the Libyan conflict as sub-regional after regional and international powers have entered the conflict zone, making the Libyan civil war a proxy war. This is a situation that is irritating Algeria and making it tense for national security and political stability concerns. The regional powers and other pivotal states in the region do not want to see a strong Algeria.

Taking this stance, Egypt and France, the two logistical pillars of the Riyadh-Abu Dhabi axis, look at Libya as an opportunity to distract Algeria, notably the new Algeria, from thriving and leading. In the latest undiplomatic episode, with the U.N. Secretary General’s appointment of the new Libya special envoy, former Algerian Foreign Affairs Minister, Ramtane Lamamra, a well experienced diplomat, the Abu Dhabi-Riyadh axis and their supporters Egypt, France and Morocco, pressured Washington to veto his nomination at the U.N.Security Council. This undiplomatic move upset Algiers.

Algeria still believes strongly that it is part of the solution in Libya, and, without Algeria, there will never be a stable Libya. It is certain that the domestic challenges that Algeria dealt with in recent years have weakened its pivotal position in the region. This is why all analysts on the Libyan case argue that Algeria’s role is imperative and important. Libya today is in a situation, where Lebanon was in 1989. This would be like the pre-Taïf Accord process but with a difference, that being that Libya is not a sectarian state.

Thus, Algeria seems to have a plan since the Skhirat Accord collapsed. This accord was stillborn. Algeria is aiming for a new negotiation process to succeed. The ongoing developments on the ground would shift the power and the behavior of any further negotiations. The GNA president Fayaz A-Sarraj has declared last week that the LNA chief is no longer a relevant partner.

A consensus, however, must be found. As the saying about war goes: “whoever wins the ground, wins the table.” Therefore, it is relevant but Libya’s complex sociopolitical structure would impose on anyone, who would be speaking on behalf of Libyan people, to think about the Malian model and how Algeria did manage that crisis politically in 2012. The key piece of the Libyan puzzle is that tribes and Algiers have good relations. Once the rough moments of the Covid-19 crisis slow down, Algiers is already calling for a Libyan Conference next summer. This is because, at the end of the day, Algeria would never accept for Libya to turn into something like the Sudan.