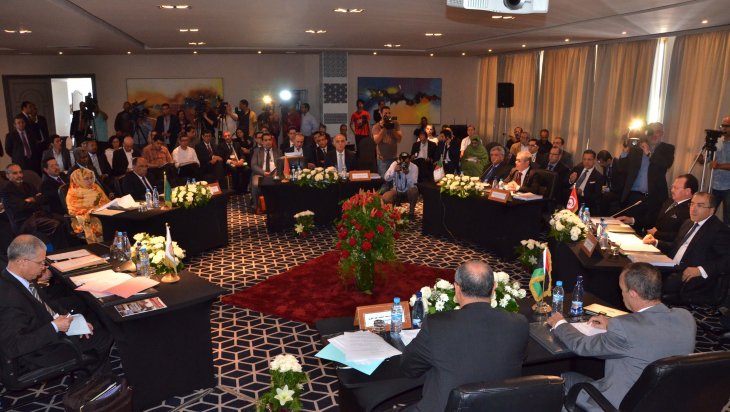 Tunisian President Qaïs Saeed’s visit to Algeria in his first foreign trip, and Algerian president Abdelmadjid Tebboune’s decision to evacuate ten Tunisian, several Libyan and Mauritanian students, and thirty six Algerians, on a special plane from the Chinese city of Wuhan due to the spread of the Coronavirus all happened last week.

What does all this mean for the Maghreb countries; what does Algeria’s $150 million deposit in Tunisia’s national bank as a loan mean, and how will this rapprochement be reflected on the Libyan crisis and the endless cold peace between Rabat and Algiers?

Algeria embraces Tunisia by securing its borders for national security concerns from Islamic radical armed groups and human smuggling and trafficking. Algerian tourists played a major role in rescuing Tunisia's economy as they poured into Tunisia and compensated for the absence of European tourists, who have been showing concern about their safety in the wake of the terrorist attacks in 2015. More importantly, there are common borders for Algeria and Tunisia with Libya which faces a complex political and military crisis.

Coordination between the two countries is a must because both countries cannot afford to see Libya turn into a failed State or a militias State.

Algeria's national security goes with Tunisia's security and stability, confirming that there is a complete agreement from the two countries on all international issues. It also means that Tunisia and Algeria confirm that the solution in Libya is internal between the Libyans, preventing the flow of weapons and foreign fighters in Libya and starting a new stage for building institutions based on new free elections. This alliance between Algiers and Tunis would fortify positively the political solution argument and reflect a great deal on the Libyan crisis final solution.

The absence of pivotal Maghreb countries like Algeria and Morocco to get involved in mediation and reconciliation has worsened the role of AMU’s institutions. This has led to a national and sub-regional security vacuum that caused further instability and put the entire project of the Maghreb Union that millions of people have been waiting for decades.

At least on the economic level, for a better integration, the bold decision of the Algerian president to inject money into the Tunisian national bank facilitated Tunisia's payment of the gas bill and the obstacles facing this framework and eventually stimulating the Tunisian economy. This is in spite of the difficulties of Algeria’s financial situations resulting from the fall of oil and gas prices and the deep socioeconomic problems that Algeria faces as a result of the corrupted oligarchic system that ruled the country from 1999 to 2019.

Algeria's latest foreign policy activities are shifting towards actions following the election of president Abdelmadjid Tebboune last December. This has intensified its historical role and presence, which is now becoming more determinant and active. The Berlin conference on Libya last month was a positive sign for all the Maghreb countries. Algeria’s return on the Sub-regional, regional and, to some extent, on the international stage has the full support of its Arab eastern neighbors, Tunisia and Libya, for Libya to restore its State authority and to preserve its territorial and demographic unity, security and stability in the face of the proxy war that aims to plunder Libya’s territorial integrity.

The legitimate demands of the Maghreb people's movement for democratic political reform, fighting corruption, achieving social justice, equitable distribution of wealth, peace and social security across the region should not be forgotten. At the same time, people in the region are expressing their hopes that the new Algerian administration will head west towards its western neighbor country, Morocco to alleviate the crisis, if it does not resolve it, and open the borders between the two countries in a way that serves the two countries’ national interests and their peoples’ aspirations.

Thus this demand is not impossible despite all the difficulties and the calamity that led to further complications. This is because of external factors that are linked to regional powers’ interference in the Maghreb countries domestic politics.

The time has come for the Arab Maghreb Union (AMU) countries, Algeria, Tunisia, Libya, Morocco and Mauritania which signed the Marrakech Treaty thirty-one years ago that establishes the AMU and provides a momentum for its achievement. The Marrakech Treaty provides for the need for an effective cooperation in political, economic and cultural spheres and a continuous complementarity in various fields, including natural and strategic resources. Algeria and Libya, however, have abundant oil resources and Mauritania is naturally endowed with minerals. On the other hand, Tunisia and Morocco have made efforts for the development of their financial and industrial sectors.

Various sectoral committees have worked in an attempt to progressively establish a free-trade area, involving free movement of goods, a customs union, and new common management instruments, such as the unification of customs tariffs and the elaboration of unified policies. These last instruments would be aimed at defining the common rules to allow the implementation of a system of economic regulation in the region. Nevertheless, the Maghreb countries face different challenges, which currently jeopardize the future developments of the AMU.

The political integration of the Maghreb remains the biggest challenge, the main reason behind this is the long-lasting tensions between Algeria and Morocco over the Western Sahara. It seems that mistrust and hostility are at the core of the relations between the two Maghreb countries since the Sands’ War in 1963. For instance, the year 1994 was marked by terrorist attacks in Marrakech, and the Moroccan authorities accused Algeria of being responsible for these attacks.

As a result, Morocco unilaterally imposed an entry visa for Algerian citizens. The Algerian authorities responded by closing their borders. Although the 2005 meeting between ex-President Abdelaziz Bouteflika and the King of Morocco, Mohammed VI, led to the cancellation of entry visa between the two countries, the border remains closed. And since 1994, no AMU summit was held, leaving the Union unachieved and in a deadlock.

The AMU is still relevant in spite of the current sub-regional challenges, since the signing of the Marrakech Treaty in 1989, six summits have been held with the last dating back to 1994, during these summits, the Council of the Presidency has taken several resolutions such as the completion of the AMU structures as provided for in the Constitutional Treaty; the adoption of Maghreb Conventions, addressing various sectors; and the adoption of the programs of execution of the works initiated by the AMU authorities.

Last Summer, in the aftermath of Algeria national soccer squad winning the Africa Cup championship (CAN 19), thousands of young fans across the Maghreb who massively cheered for the Greens (les Verts) in cafés and fan zones, are still willing though like their counterparts in Algeria to die in the Mediterranean for a better life that they lack at home, dreaming to find it elsewhere.

So itʼs a moral burden which weighs heavily beyond States’ national security and stability imperatives; the leaders of Maghreb countries have to re-launch almost a century-old sub-regional federalism project. People in the Maghreb are no longer afraid of any virus or want to wrap themselves in national flag because of a soccer game. They want to federate their countries, enhance their passions, their interests, even watch for each other’s public health concerns. And finally, they want to see their Maghreb union fly like a concord plane from Tataouine to Tétouan.