Cobanbey Resistance of Turkmens in Aleppo 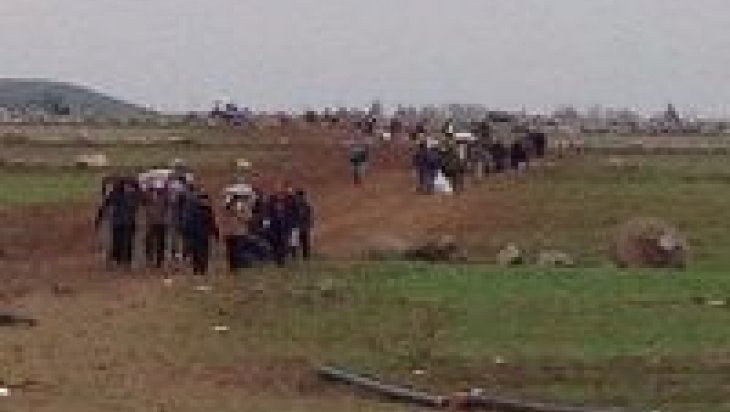 The Islamic Front, one of the most powerful armed opposition groups in Syria, has recently gained ground in the rural area between the central Aleppo and Turkish borderline against the Islamic State of Iraq and al-Sham (ISIS). ISIS which had to withdraw from northern Aleppo to a great extent concentrated on al-Raqqah, and seized control of almost the entire province. ISIS launched a heavy attack on northern Aleppo, from which it had to withdraw after gaining ground in al-Raqqah, as from January 27th. ISIS has recently taken over the control of settlements such as Jarablus and Munbic from the Islamic Front.

Turkmens are densely populated in northern Aleppo, and the region between Azaz – Jarablus on the Turkey – Syria borderline. While the Turkmen-populated villages were under the control of Turkmen units affiliated to the Free Syrian Army, security of the region was provided by the groups affiliated to the Islamic Front, Tawhid Brigade in particular. As a result of the recent attacks launched by ISIS, the Islamic Front and Turkmen units had to withdraw from the major settlements back to the Turkmen populated town of Cobanbey across the Elbeyli village in Kilis. There were only two alternatives left for the Islamic Front and Turkmen military units which act in unison after withdrawing to Cobanbey: To cross border into Turkey and take shelter in Turkey, or to fight against ISIS in Cobanbey that is the last biggest settlement they have control over. Turkmens and the Islamic Front chose to fight in Cobanbey.  Heavy attacks have taken place between ISIS and Turkmens in Cobanbey since January 27th. In the first place, Turkmens and the Islamic Front gained ground against the ISIS. The attacks carried out by ISIS from Tal Aisha and Kap Viran villages of Cobanbey were fought off. Afterwards, ISIS started to drop bombs on Cobanbey. A considerable part of the local residents of Cobanbey had to leave the town of Cobanbey and migrated into Turkey because of the attacks. More than 3500 Turkmens crossed the border into Turkey overnight. After the conflicts in the first stage, the conflicts between and Turkmen and Islamic Front militants and the ISIS which had been deployed in Turkmen villages of Tal Aisha and Cuppun in 4 km-south of the Cobanbey town were relaunched. Turkmens counterattacked and started to bomb ISIS positions. Over 50 terrorists were killed by ISIS during the conflicts that took place around Tal Aisha, Alici and Toyan; and lots of vehicles and heavy weapons were destroyed. Afterwards, ISIS raided Turkmen houses in villages of Cobanbey, and arrested the relatives of the Turkmen fighters. The conflicts between the parties spread to Turkey as well. As a result of the attack launched on two vehicles of the Turkish Armed Forces (TSK) on the borderline, TSK counterattacked. The Turkish army stated that the attack came after two Turkish military vehicles had been fired upon at the Cobanbey border post; and a pick-up, a truck and a bus in ISIS convoy were destroyed.

It might be suggested that the conflicts taking place around Cobanbey are important in several aspects:

1.  Turkmens in Aleppo, one of the two most important Turkmen regions in Syria, had to migrate; Turkmen-populated regions were emptied.

2.  A considerable part of the Turkey – Syria border is under control of the Al Qaeda-affiliated ISIS, and the security risks caused by this situation.

3.  The possibility that ISIS threat could increase, and the attacks on Turkey's relatives Turkmens around the borderline could draw Turkey in the conflict. TSK's attack on the ISIS convoy might be given as an example to these attacks.

Although Syrian Turkmens are dispersed all across the country, they are densely populated in Aleppo and Latakia provinces near Turkish borderline. The Turkmen-populated Latakia province, which is known as Bayır – Bucak, is almost completely evacuated as a result of the attacks by the regime forces. Even though the vast majority of the villages are under control of the Turkmen units, the local people in the area migrated to Turkey because of the ongoing air attacks of the regime. The Turkmen districts of Aleppo, on the other hand, did not confront such problems until the recent conflicts. The Turkmen-populated districts located between Azaz and Jarablus were under control of the opposition groups, almost all the local residents continued to live in their villages and towns. A mass migration flow started from Turkmen-populated districts of Aleppo into Turkey as a result of the conflicts. In that case, the population in the two most significant Turkmen districts will have been emptied to a large extent. Despite the fact that ISIS is not dominant in Bayır – Bucak, it is present in the area. There were some news in the Turkish media on ISIS massacres against Turkmen civilians in Bayır – Bucak not long ago. The ISIS threat might completely empty the Turkmen-populated Bayır – Bucak where the Turkmen population has already decreased to a great extent.  Likewise, the massacre against civilians by ISIS which is much more powerful in Aleppo might completely empty the Turkmen-populated areas of Aleppo. On the other hand, Turkmens who are already a few in al-Raqqah province are not strong enough to fight against ISIS which is the most powerful organisation in the province. The conflicts in Cobanbey could negatively affect Turkmens in al-Raqqah province.