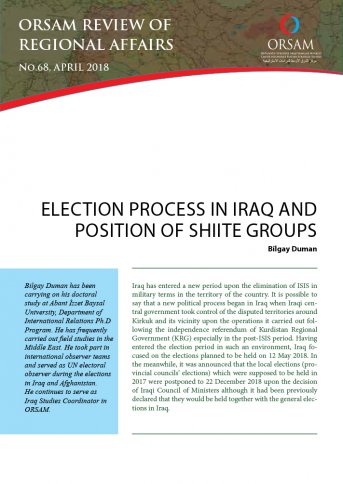 ELECTION PROCESS IN IRAQ AND POSITION OF SHIITE GROUPS

Iraq has entered a new period upon the elimination of ISIS in military terms in the territory of the country. It is possible to say that a new political process began in Iraq when Iraqi central government took control of the disputed territories around Kirkuk and its vicinity upon the operations it carried out following the independence referendum of Kurdistan Regional Government (KRG) especially in the post-ISIS period. Having entered the election period in such an environment, Iraq focused on the elections planned to be held on 12 May 2018. In the meanwhile, it was announced that the local elections (provincial councils’ elections) which were supposed to be held in 2017 were postponed to 22 December 2018 upon the decision of Iraqi Council of Ministers although it had been previously declared that they would be held together with the general elections in Iraq.