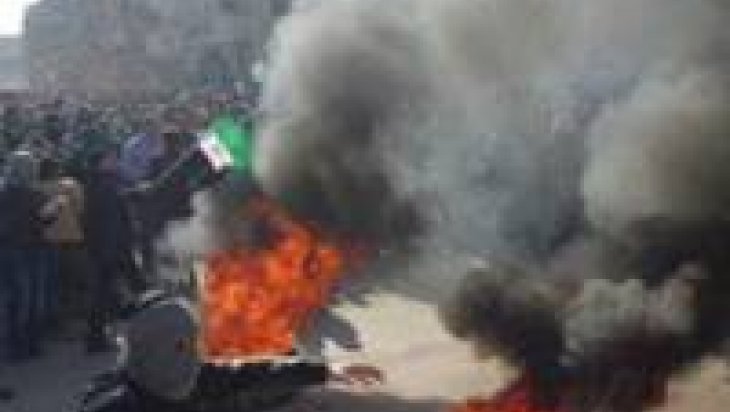 The uprising in Syria began as a civil movement. But within six months, the popular uprising had become armed resistance. The conflict had two parties at that stage.

The conflict was between the regime and the armed opposition gathered under the umbrella of the Free Syrian Army (FSA). This conflict continued due to no party having an advantage over the other in the armed struggle, and the conflict between the regime and opposition became a civil war based on ethnicity, sect and ideology. During this process, the central authority grew weaker and disorder prevailed in the major part of the country. The regime lost control of almost half of Syria, particularly the rural areas and the northern part of the country. While the regime remained unified, despite its loss of control in certain areas, rival factions emerged within the opposition after the withdrawal of the regime forces, which were seen as a common enemy, from the areas seized by the opposition. This process led to a multidimensional civil war after the two-party conflict consisting of the regime and opposition. At this point, it can be said that there are five parties in the Syrian civil war:

2. The FSA (there is a lack of cohesion within this group)

3. Salafi groups (coalitions such as the Islamic Front and the Army of Islam)

4. The al-Qaeda-affiliated Islamic State of Iraq and al-Sham (ISIS)

In the present stage, all these parties fight each other from time to time. The regime and the Kurds have managed to maintain their cohesion in the areas under their control, and they are in a strong position. The greatest advantage of these two is their possession of a central authority. Despite the defections from the regime, the integrity of the regime's army and other state institutions has been maintained to a large extent. Furthermore, the regime has recently switched from a defensive position to an offensive position. The regime's forces have seized all urban centers in Syria except Ar-Raqqah. Also, the regime has reinforced its position in western Syria through military operations in Qusayr and Qalamoun. It is in a stronger position than last year in the city of Aleppo and has been attempting to take complete control of the city. The Syrian administration has been using the time gained through the destruction of its chemical weapons to reinforce its position in the field.

Among the opposition groups, on the other hand, the Islamic elements are growing stronger. Many groups which used to fight under the umbrella of the FSA began to coalesce among themselves. The most important of all is the Syrian Islamic Front, an umbrella organization of seven military brigades including Ahrar al-Sham. In addition, 43 Islamist rebel groups have joined forces as the Army of Islam. These groups are the core of the military opposition in Syria. The Islamic Front recently seized control of the FSA's military headquarters in Bab al Hawa and then the border crossing located opposite Turkey's Cilvegözü border gate. These groups declared that they did not recognize the authority of the Syrian National Coalition.

On the other hand, the Kurdish YPG has control of the Kurdish settlements. It is striving to expand its existing influence in the Kurdish regions into Arab and Turkmen areas. More importantly, the YPG controls some strategic resources needed to finance the civil war, including oil fields and some border crossings.

For the time being, the loser in the five-party civil war is the FSA. Those who argued for a new regime attempted to gather the opposition under a single umbrella and affiliate it with a political authority through the FSA. However, the fractious Islamic groups destroyed this goal of unity. The FSA recently lost control of the Atma and Bab al Hawa border crossings, which are of critical importance. Aid was being delivered to the FSA through these crossings. Moreover, the FSA was forced to leave its military headquarters in Bab al Hawa to the Islamic Front. Thus, the FSA is now in the weakest position in the five-front civil war. Its failure to remain unified should be added to its weakness in the face of other groups. Furthermore, the level of FSA commander Salim Idris' power over the brigades under his command has always been controversial.

The al-Qaeda-affiliated ISIS, on the other hand, is flexing its muscles in Iraq and northern Syria. It can be said that the Syrian province of Ar-Raqqah is largely under ISIS control, and it recently seized control of Atma, an important border crossing for the delivery of aid from Turkey to Syria. It has also seized control of some oil fields in the province of Deir ez-Zor. ISIS is increasingly becoming a shared threat for the other parties in the war and also for external actors. In fact, the Islamic Front emerged as a result of efforts to balance ISIS's rising power. For the West, ISIS is more of a threat than the Assad regime. Likewise, Russia is concerned that mujahedeen of Caucasian and Central Asian origin fighting alongside ISIS and the al-Nusra Front might lead to instability in the country and its environs due to their fighting experience. The rising threat of radical Islam is one factor underpinning the US-Russia agreement on Syria. The Geneva II conference will be held on Jan. 22, 2014. But the main problem for the conference is to what extent the Syrian National Coalition (SNC), which will take part in the conference on behalf of the opposition, represents the players [of the opposition] on the ground and to what extent the SNC has authority over them. The FSA, which is believed to be influenced by the coalition, is the weakest link in the five-front civil war.