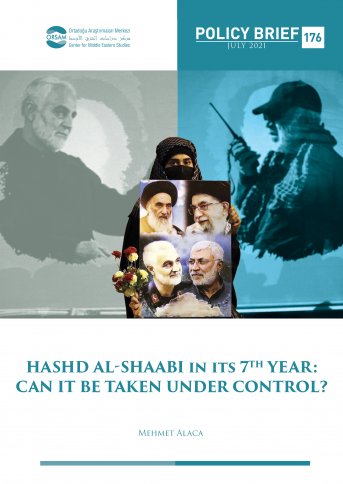 Hashd al-Shaabi in its 7th year: Can It Be Taken Under Control?

It is observed that in addition to its military power, the Hashd al-Shaabi, Iraqi militia umbrella group also known as the Popular Mobilization Forces (PMF), founded in 2014 in Iraq with the fatwa issued by Iraq’s top Shiite cleric Grand Ayatollah Ali al-Sistani and whose legitimacy is still being called into question, has a major impact on political, social and economic life in Iraq, assuming an alternative role to the institutional structure of the country. As an umbrella organization consisting mostly of armed Shia militias supported by Iran, the Hashd al-Shaabi has yet again actively occupied the agenda of the country by displaying its latest drone models in the military parade on 26 June 2021, organized for the seventh anniversary of the fatwa issued by Ayatollah Ali al-Sistani on 13 June 2014 that laid the foundation of the organization, raising questions  and discussions about its future in its seventh year of operation.

Deputy Chairman of the Hashd al-Shaabi Abu Mahdi al-Muhandis, who was assassinated in a US drone strike in Baghdad in January 2020 together with the Commander of the Quds Force of the Islamic Revolutionary Guard Corps, Qasem Soleimani, had ordered the deployment of an air defense unit a few months prior to his death, yet this order was overruled by the Chairman of the Hashd al-Shaabi, Faleh al-Fayyadh. Already carrying out drone strikes, the Hasd al-Shaabi’s addition of anti-aircraft weapons to its arsenal, despite the opposition of authorities, will both intensify the attacks on foreign powers, particularly the US, and make it even more difficult for the already-struggling government to control the organization. While Prime Minister Mustafa al-Kadhimi, who has brought important changes to governmental posts and the security bureaucracy especially since his inauguration in May 2020, was unable to achieve progress in his first promises to reconstruct the Hashd al-Shaabi and reserve the use of force to the government; the consolidation of power by the organization through anti-aircraft weapons and drones indicates how hard it is for the government to control the organization.