How to untie the Idlib knot? 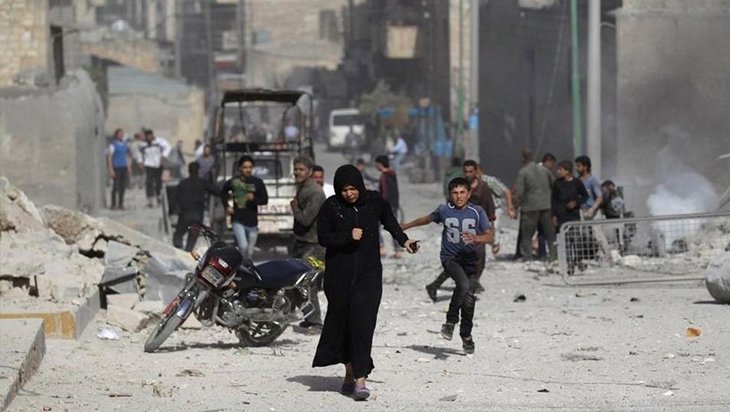 Opposition territories in Daraa and in the province of Quneitra on the Israeli border were declared a de-escalation zone as a result of an agreement reached between Russia, the United States and Jordan. However, the Syrian regime forces, which ended their operations in the central part of the country, were directed to these two provinces as new targets.

In this process, negotiating with the US, Jordan, Israel, Syria and the opposition parties, Russia tried to create a solution map in regards to the southern Syrian front. The main concerns of Israel and the US with respect to the southern Syria front are the entry of Iran and Iran-backed militia groups into this area. The US and Israel did not raise their voice against the operation in return for the fact that the given forces did not participate in the southern front operation and were withdrawn 80-90 km in from the Israeli border. The US, on the other hand, left the Syrian opponents it backed up for many years on the southern front alone in the face of the regime.

Under this agreement, the Russian-backed Syrian forces began the southern front operations in mid-June and the city of Daraa was initially targeted by air strikes for about three weeks. The rapid military advance of the regime forces led to the process of negotiations and ceasefire with opponents. As a result of the negotiations under the Russian mediation, a consensus was reached that the opponents should deliver heavy weapons, leave the Jordanian border and the Nassib border gate to the regime, and the opponents who refuse the deal shall be sent to the Idlib or Euphrates Shield regions with their families. Following the ceasefire agreement that was concluded on July 6, regime and supporters entered the Daraa city center and gained control on July 12. Accordingly, the Syrian regime took control of Quneitra and managed to reach the Golan Heights border. The most significant result of the Daraa and Quneitra operations was that the Israeli and Jordanian governments accepted the presence of the Syrian regime forces on their borders.

Possible Idlib operation and risks
It is expected that the next target of Damascus, which has further strengthened its position through the mentioned operations, would be Idlib. Both the statements made by Syrian political and military officials and the deployment of the elite elements of the Syrian army, the "Tiger Forces", around Idlib following Daraa, have strengthened this very possibility. Although the Syrian army has rapidly progressed so far, there exist several serious obstacles to a comprehensive operation against Idlib. Due to these obstacles, it can be asserted that a "large-scale" operation towards Idlib is not certain.

The first factor that makes the operation difficult is the larger number of civilian and armed people in the city. As a consequence of the ceasefire agreements in Syria, all civilian and armed elements had been transferred to Idlib. Herein, there are around 3 million civilians in Idlib. Secondly, about 80 thousand warriors belonging to different groups have been deployed in Idlib. Thus, heavy military operations towards Idlib would definitely lead to a humanitarian crisis and a wave of immigration to Turkey. As the wave of migration will threaten the security of Europe, it can be expected that the international reaction will be higher this time than the operations carried out in other areas.

However, what is more important is that the presence of numerous opposition fighters in Idlib may reduce the chances of success of the operation to be conducted by the Syrian army. It can be argued that there exist four opposing umbrella organizations in Idlib. These are the Syrian Liberation Front (FSA Groups), Jabhat Tahrir Syria (JTS)—the union of Ahrar a-Sham and Harakat Nour e-Din a-Zinki,  Hay'at Tahrir al-Sham (HTS), which is still the strongest group in Idlib and has declared its disassociation from al-Qaeda, and finally the Hurras el-Deen which was established by the al-Qaeda elements separated from the HTS in February 2018. Groups such as the Turkestan Islamic Party, which still prefer to act independently from umbrella organizations, can be added to these. These organizations were lately in intense conflict with each other for the control of Idlib. However, in case of a possible regime attack, such organizations can easily come together against the common threat, not including al-Qaeda elements. As soon as the Idlib operation came to the forefront, the first step was taken in this direction and the FSA groups announced that they were united with the JTS.

The regime may not get the support it expects from Russia
The second factor that complicates the Idlib operation is the Turkish position and its military presence in the region. Unlike the opposition regions that the Syrian army has recently seized, Idlib is of vital importance to Turkey; since this operation has the potential to have a direct effect on Turkey. Therefore, Turkey may respond to an operation to be carried out without any coordination with itself. Secondly, Idlib has been surrounded by 12 Turkish observation points and the security of the city has been de facto left to Turkey. Even though Turkey's military presence in the observation points is not a deterrent element, any attack on the Turkish Armed Forces will prompt the Turkish army to be engaged in the conflict. That Idlib has a border with Turkey will enable Turkey to become involved in anything related to Idlib, if necessary. This is an advantage that the opponents have not had in the conflicts in other regions.

The most crucial factor that will prevent or limit the Idlib operation will be the stand Russia will take. Russia will make efforts in order to maintain cooperation with Turkey, not to let the Astana process collapse and Turkey and Syria face one another. Attaching importance to the cooperation with Turkey in Syria, Russia will be open to coordinate the Idlib operation with Turkey. There are some efforts in this direction. The Russian delegation led by Putin’s special delegate for Syria Lavrentiev came to Turkey and held meetings in the last week of July 2018. It is highly probable that the Idlib issue has been discussed in these meetings. On September 7, Turkey will host the summit titled “refugees and the reconstruction of Syria” which Russia, Germany and France will participate in. This summit is another indication that the Turco-Russian cooperation will continue in Syria. Because of all these reasons, Russia may not give full support to the Syrian regime in the Idlib operation.

The most likely scenario is to reach an agreement
Iran’s position will also be effective in determining the beginning and the size of the Idlib operation. Unlike Russia, Iran argues that the military struggle should continue until all opposition elements are removed from the scene. From this point of view, it can be said that it is closer to the expectations of Damascus. This divergence of views between Iran and Russia most clearly came to light during the Afrin operation. While Russia remained neutral in the Afrin operation, Iran-backed militias and the forces affiliated to the regime entered Afrin to back up YPG. However, Russia’s neutrality enabled Turkey to target these elements fighting on YPG’s side in a comfortable way and to neutralize them. There was a similar situation in Idlib. Although Turkey sent troops to Idlib in accordance with the trilateral agreement, Iran-backed militias, not much pleased of the developments, carried out attacks against the Turkish army during deployment. In the period when the Idlib operation is on the agenda, Iran probably prefers a method to capture the city with Damascus and to destroy the opponents. However, due to the increasing US pressure, Iran is being stalemated day by day into the region. The factor that will determine Iran's position on the Idlib issue will be the protection of its interests in the broader framework rather than the expectations at the local level. During this period when Iran is under a huge pressure, it seems unlikely that Iran will take a step and take Turkey on.

Because of all these factors, it can be said that a comprehensive military operation against İ-Idlib is not certain. Putin’s special delegate for Syria Lavrentiev has declared that “a large-scale operation towards Idlib is not on their agenda,” which supports the uncertainty of an operation. The possible scenario is a deal to be reached on Idlib. The clue to how this deal might be is still hidden in Lavrentiev's statement. The Russian official said, "the Idlib operation will not be needed if the al-Qaeda problem is resolved". Therefore, the most likely scenario for Idlib is only a limited operation on the radical elements and the regions they control. The Syrian regime can independently launch a large-scale operation without receiving Russian support. Nevertheless, the chances of success of such an operation under these circumstances will be quite low or extremely costly at best.

This article was published on August 10, 2018, with the title "İdlib düğümü nasıl çözülecek?" (How to untie the Idlib knot?) in the Anatolian Agency Analysis News.