In Pursuit of Democracy: A War of Paradigms on the Libyan Front 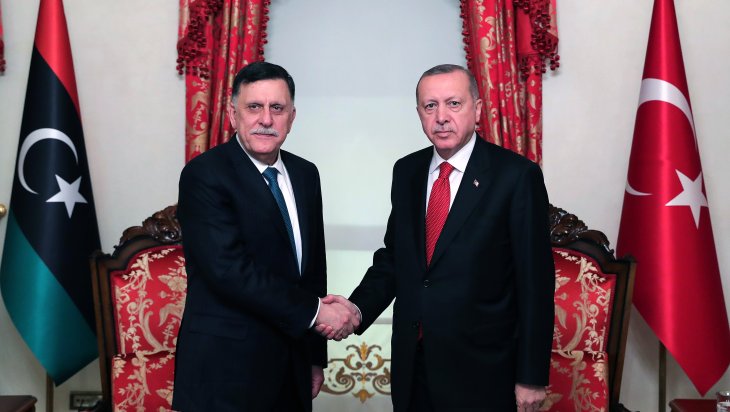 Following the approval of the Turkish Parliament to send troops to Libya, Egyptian President Abdel Fattah El-Sisi quickly convened a meeting with the Egyptian National Security Council, in reference to the seriousness of the situation in Cairo, as well as to send signals to Turkey that Egypt is serious in facing the new Turkish influence in Libya. Hence the question, “will there be a Turkish-Egyptian military confrontation in Libya?”

Sending Turkish forces to Libya is widely seen as a defensive rather than an offensive move, although this move upsets countries interested in Libya from the Egyptian-Saudi-Emirati axis, which recently worked to impose a military solution using Libyan militia leader Khalifa Haftar to launch operations to conquer the capital Tripoli. If this vicious aim was fulfilled, then a process of repetition of the military coup that took place in Egypt on the third of July 2013 would take place with all instances of unstable security and political instability and undermining of the state capabilities. Just as happened in the wake of the Egyptian coup that led to an escalation of assassinations and targeted killing of the opposition and a war of attrition against security forces. This would be so, whether in the Sinai or in the Western Desert, as Egypt didn’t witness a state of stability or civil peace. Instead it witnessed a deepening conflict and an erosion of the state’s capabilities and fulfillment of a downward spiral of a zero-sum war that could have been avoided if the revolution in Egypt could have preserved its political and democratic track.

The Turkish move to send forces has several security and political dimensions, and it also sends messages to the regional and international actors that Libyans have not been left alone, especially since Turkey has become an active regional actor. The most important signal in sending Turkish forces to Libya is that Ankara will not allow Libya to fall into the hands of the despotic regimes that worked to fail democracy around the Arab world.

Turkey is now much bigger than the size it was imprisoned in after the Treaty of Lausanne, which aimed to make it play a functional role to contain Russia and to provide security services to the West without benefiting from the modernization of its army, whether at the level of air defense or at the level of the air force. This is the price that Turkey has always paid in the past decades, and it has moved today in order to change that by getting the S-400 missiles and the determination to acquire fifth-generation fighters, whether the American F-35 or moving to the Russian Sukhoi 54.

If Turkey gave a blind eye allowing Haftar to impose a military solution on Libya, that will lead to more unrest with security and political unrest in the region, and would undermine the model of democracy and good governance for good. At that critical stage in Turkey’s history, building regional alliances and networks of friendly states is more important than ever.

Rising powers in history succeeded in imposing new realities and breaking rules of the games, while Turkey is aiming to see good governance spreading in the region, with states that work to enhance security, peace and well-being of their people to avoid more civil wars and refugee crises.

On the other hand, the Egyptian goal in Libya is to avoid the model of good governance and any successful models of democratization. This would destroy the foundations of military authoritarianism, upon which the Egyptian regime was built since the July 1952 coup. Cairo knows that the success of rising democracies will necessarily spill over to the Egyptian society, as people will see a successful, effective, and evolving alternative to authoritarian rule that has produced blood, refugees, prisoners, and massacres of journalists such as Jamal Khashoggi and many others. Hence, the Egyptian vision works to perpetuate authoritarian and oppressive solutions in order to preserve the interests of the military regime and its allies from dictators around the Middle East.

After all, it is unlikely that we will see an all-out war between large countries in the region such as Egypt and Turkey, while the prevailing proxy war model in the political vacuums around the region can be repeated on the Libyan scene. Meanwhile the international community must support the defensive purpose of the Turkish troops, as it is working on the preservation of the internationally recognized and legitimate government.

On the other hand, the support of the axis of Egypt, Saudi Arabia and the UAE to Khalifa Haftar, whether by armored vehicles and drones or financial and moral support or media coverage must be condemned from the democratic world that ignored their violation of the UN weapon embargo on Libya.

Turkey, in this process, is motivated by its threat perception urging Ankara to preserve its interests and security. One of the key dynamics of this maneuver is supporting the democratization process in the region. Eliminating possible democratic models in the Arab world is a material and real threat that will damage Turkey’s efforts to support democratic transformations in the Middle East. Such efforts by hostile regional and international actors will also aim to isolate and contain Turkey on the long run. These actors attempted to undermine democracy in Turkey as well, as they supported the failed coup attempt on the 15th of July 2016.

In conclusion, it can be argued that Turkey is a successful example of a full-fledged democracy in the Muslim world that has all the right to preserve its achievements in a severely tense region. The democratic world must support Turkey’s efforts in this regard if they have a constructive vision toward the region.

*Muhammad Soliman Al-Zawawy is a lecturer and PhD Candidate at the Middle East Institute (ORMER) at Sakarya University.