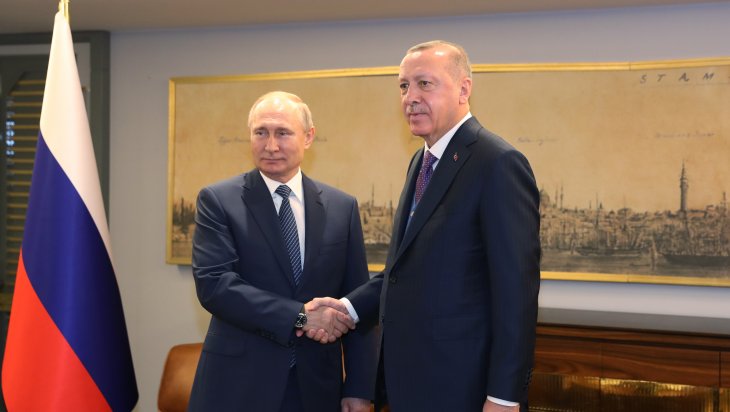 For a long time now, competition has been underway in the Eastern Mediterranean over sovereignty claims and the distribution of hydrocarbon reserves.The Eastern Mediterranean, which needs to be a field of cooperation, has turned into a place of problems due to political conflicts between riparian states.The same political problems had led to an alliance trying to isolate Turkey in the power struggle in the Eastern Mediterranean.Greece, Israel, Egypt and the Greek Cypriot Administration of Southern Cyprus tried to limit Turkey’s sovereign rights in the Eastern Mediterranean with the agreements they signed among them.Against these moves, Turkey carried out natural resource discovery work in regions falling under its own jurisdiction and by backing this move with naval forces, tried to send out the message that it was prepared to take any step to protect its interests, including the use of force.

The development that completely upset the power balance in the Eastern Mediterranean was Turkey signing an agreement on the delimitation of maritime jurisdiction zones with the Libyan Government of National Accord (LGNA). Among decision making circles in Turkey, the opinion that Libya was Turkey’s neighbour in the Eastern Mediterranean and that a maritime agreement should be signed with it had long been voiced.This step only came in late 2019.This move has resulted in Turkey suddenly changing the balance in the Eastern Mediterranean competition to its benefit.Turkey now has the means to support its strength in the field with diplomatic and international law means.First of all, Turkey managed to break its isolated position by forming an alliance with another coastal state.Secondly, it made direct geographical contact between the maritime jurisdiction zones of Turkey and Libya, drawing from rights afforded by the international law and thus established that discovery work and projects for the transfer of natural resources cannot take place in the region without the permission of the two countries.Most important of all, Turkey managed to obtain an outlook that would strengthen its hand over protecting sovereign rights in the Eastern Mediterranean and the Cyprus issue, that are of vital importance to it.

These developments have made the continuing civil war in Libya an issue connected directly with Turkey’s vital interests in Cyprus and the Eastern Mediterranean, rather than another foreign policy issue.The permanence and implementation of the agreement signed between Turkey and the Tripoli Government depends on the Sarraj-led LGNA being able to continue to stand against Haftar's forces.The political and military forces of Haftar, who have been besieging Tripoli for a long time, have announced that should they take the city, they would annul the agreement.For this very reason, the bloc working against Turkey in the Eastern Mediterranean has increased military support to Haftar to ensure that his forces can establish control throughout Libya.Haftar is mainly supported by Egypt, the United Arab Emirates and France.Geographical factors make Egypt’s role prominent.Egypt’s position over Libya greatly shapes balances in the east of the country.In addition to aiding Haftar’s forces with arms, Egyptis directly involved in the civil war with aerial attacks. France provides military counselling as well as arms support over the UAE.The UAE is the centre of support operations for Haftar.It undertakes arms support, aerial support and the financial burden of all operations.

Another actor that supports Haftar in Libya is Russia.However, Russian support for Haftar is controversial.Russia has not officially adopted a clear position in Libya.In fact, it has relations with the Tripoli government too.Russia’s involvement in the Libyan civil war took place over a controversial development. Claims were made that from mid-2019 onwards, fighters employed by the Russia-based private security firm Wagner that was often heard of in connection with Ukraine and Syria had begun to fight for Haftar and with losses accrued by Russian-origin fighters in the field being reported by open sources, Wagner’s activities in Libya became clear. The UAE probably lies behind the involvement of Wagner and it undertakes the cost of the firm’s operations in Libya.Although Wagner is a private company, it does not seem possible that it should be acting independently from Russian foreign policy.It is claimed that the head of Wagner reports directly to Putin himself.However, it is still not possible to compare Wagner’s involvement with the civil war in Libya to its engagement in Syria.Wagner is after all a private security company and its fighters in Libya number in the thousands at most.On the other hand, Russia has been establishing large military bases in Syria, deploying strategic military elements there and officially supports the Assad regime politically and militarily.However, Wagner’s involvement in the Libyan civil war has played a critical role in shifting the balance to Haftar’s favour over the recent months.This has perhaps allowed Russia to gain influence in Libya beyond its expectations.

The change in the military balance to the favour of Haftar over the recent months has forced Turkey to increasingly back the LGNA and to consider sending troops to Libya if necessary.The Libyan government has made an official demand for this and depending on the GNAT’s decision in January 2020, Turkey may send troops to Libya and perhaps establish a military base there as it did in Qatar and Somalia.These developments have brought up the risk of Russia and Turkey opposing one another directly on the field and it is being debated that this could form an obstacle to the progress in Turkish-Russian ties or end the cooperation in Syria.

It could be said that there is a risk Turkish-Russian ties could be disrupted over Libya.However, the outcome of Turkey and Libya being in opposing camps in Libya is not necessarily conflict.The possibility of Libya becoming a field of cooperation, similar to Syria, should not be overlooked.It is known that Turkey and Russia have very different visions of Syria.This has not prevented the two countries from cooperating through the Astana platform.The influence Turkey and Russia had over opposing camps in the Syrian Civil War has allowed them to develop an initiative that produces concrete effects.Turkish-Russian cooperation in Syria has allowed for the level of fighting to be reduced significantly in 2019 and the formation of the Constitutional Committee against all odds to bring in a new phase towards a political solution. Turkey and Russia’s experience in Syria could pose an opportunity to establish coordination in Libya. There are significant advantages for the realisation of this scenario.

Due to Syria, diplomatic channels between Turkey and Russia are fully open and all mechanisms necessary for security cooperation are in place at the moment.Turkish and Russian foreign ministry officials carry out regular meetings very often.More importantly, due to the military dimension, there is close contact between the militaries and intelligence agencies of the two countries as never before.On top of all these channels is the work run at the presidential level.Both countries have strong leaders who enjoy a positive relationship.If there are bottlenecks in relations between institutions or on the field, the two leaders can met, take the decisions to overcome the bottleneck and have their institutions implement it.All these advantages point towards Turkey and Russia's opportunity for cooperating in Libya using a format similar to Astana, despite their differences.Such cooperation will allow the two actors to dominate the process and to limit the roles of other actors.

Turkey and Russia have the opportunity to cooperate in Libya as they did in Syria.However, the difference in circumstances in Libya compared to Syria should not be overlooked.For one thing, neither actor has the same level of influence over actors in Libya as they do in Syria.Geography poses a disadvantage as operation regions are not adjacent.Third, unlike Syria, in Libya European countries and the Gulf are important actors.These limit the opportunity for Turkish-Russian cooperation to control the process in Libya. The two countries may cooperate on ensuring a ceasefire in Libya and a political solution through a more widely-participated format than in Syria.Had Turkey and Russia managed to cooperate early in the Syrian crisis, stability in Syria may have been established much sooner.With lessons learned in Syria, a political solution in Libya at an earlier stage of the crisis may be possible.