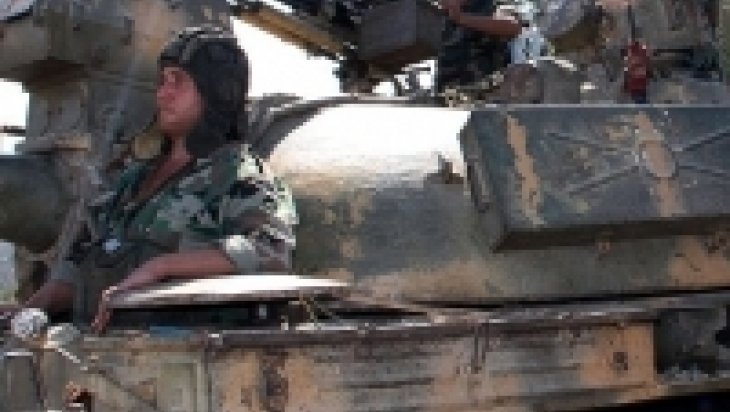 The Syrian regime has recently made significant gains against the military opposition. At this point, the Syrian army is trying to prevent external support of the opposition. First of all, they are striving to control the Lebanese border through the Qalamoun operation. Parallel to this operation, heavy conflicts have been taking place around Aleppo. The regime is planning to seize control in Aleppo and turn towards Azaz, and also to take control of the border with Turkey.

The regime has launched a Hezbollah-backed operation in the Qalamoun Mountains located at the Lebanese borderline between Damascus and Homs. It might be suggested that the operation being carried out has two targets. The first is to seize control of the borderline, and thus to cut the logistical support provided from Lebanon to the military opposition in Syria. Besides, this borderline is one of the major entry points for Syrian opposition forces. If the regime forces are successful in fully seizing the area, the opposition’s entry into Syria would be limited. The second goal is to connect Damascus and Homs to each other. A major step has already been taken to this end through the Qusayr operation. If the opposition were to lose control of the Qalamoun region, the regime’s forces would have control over the Damascus-Homs corridor to a large extent. This situation would be an advantage for the regime in the Tartous and Latakia provinces, where it is already in control. Furthermore, the connection between the opposition groups in eastern Damascus and northwestern rural areas would be cut.

Along with the Qalamoun operation, the regime has also been carrying out military operations in as-Safira, which is located in western Aleppo. Here, the regime aims to clear the military opposition -- which is already growing weaker -- from Aleppo by seizing the city. The regime and opposition’s control over Aleppo was 50-50 last year. Right now, on the other hand, the regime controls 80 percent of the city center. If the operation by the regime forces is successful in taking complete control over Aleppo, the presence of the opposition in the city center may well come to an end. In that case, the regime would have the opportunity to take over the control of Damascus and Aleppo and to stand on its two feet. If the regime -- with major gains in the field through Hezbollah’s support -- achieved the Qalamoun and Aleppo operations, the next goal would be to try to take control of the Turkish border. To this end, the regime’s army might be expected to turn towards Azaz, which is located across Kilis.

The regime has currently seized control of all city centers except for al-Raqqah and Deir ez-Zor. Nevertheless, it even has control over some strategic military bases in the provinces where the aforementioned cities are located. The opposition, on the other hand, has control only over the rural areas with no strategic importance. In addition, the areas where the opposition has influence are not controlled by a single group. In such areas, conflicts take place between the al-Qaeda-affiliated Islamic State of Iraq and al-Sham (ISIS) and the Free Syrian Army (FSA). Another fact is that the Kurdish militia group, the People’s Protection Units (YPG), is advancing in northern Syria, where the opposition is most influential. The YPG seized control of tripartite Kurdish regions (Jazirah, Kobani and Afrin) in the first stage. Currently, it is trying to connect three separate Kurdish regions to one another and to spread the conflict into the areas populated with Arabs and Turkmens. To this end, the first target is Tal Abyad. Right now, the conflicts are concentrated in the southern settlements of Tal Abyad. If the YPG seizes control of these areas, it could also take control of Tal Abyad through attacks from Kobani and southern Tal Abyad. Thus, it would establish a geographical connection between Jazirah and Kobani. The Democratic Union Party (PYD) and the YPG are in close contact with the regime, if not openly, and they are supported by the actors taking sides with the regime. In the Til Koçer operation, in which the YPG seized control of the Yarubiya border crossing which opens to Iraq, the Iraqi army supported the YPG on the other side of the border. Hence, the advance of the PYD/YPG in southern Syria, which the opposition has influence over, might be assessed as a gain for the regime.

The regime’s military gains in the field make it difficult for the Geneva II conference to be held. On the one hand, the Syrian National Coalition would not want to sit at the table to negotiate in such a weak position. And the regime would not be eager to make concessions to the opposition due to its military advantage over the opposition. At this point, the regime sees the Geneva process as an advantage to buy time. Because the regime thinks that it can suppress the opposition to a great extent if the process continues like this. The Hezbollah leader Hassan Nasrallah said, “We are in the last quarter of a historic and strategic victory in Syria,” in a speech delivered not long ago in his country. And, thus, he pointed out that they expect victory in the near future.