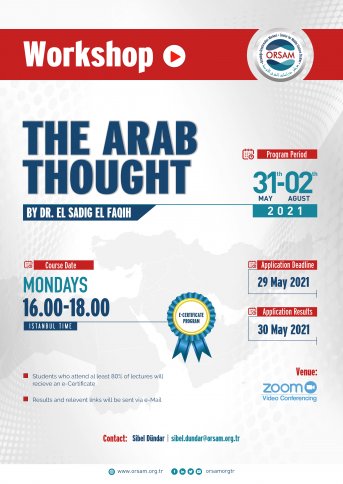 The Arab thought is presented, in recent history, to have its own cognitive systems and peculiarities. Though it was always linked to Islam, but some intellectuals have related its origins to the Arab existence, arguing that it was developed through the ages and influenced by all the changes and challenges that Arabs have experienced in their life. They claim to have been determined by the narrative of Arab heritage; represented in the phenomenon of "Diwan of the Arabs" before Islam, and later on by the Islamic tenants encompassed largely in the Holy Qur’an and the Sunnah, as the foundational structure. It is represented in what the accumulation of intellectual, scientifical, philosophical and in all other elements of the Arab creative arts, literature, ethical and behavioral culture that came and developed after Islam to this day, and it is also shaped by mixing with other Islamic nationalities and their tangible and intangible cultural contributions, and ever evolving cognitive transformations.

Much of today`s literature refers to the term "Arab thought" as an early twentieth century phenomenon, and it came to prominence in conjunction with the Arab military coups of the 1950s. Since then, many things have been attributed to it, such as, "Arab Nationalism" Arab thought institutions, Arab thought symbols and Arab thought forums, as if it is an already confirmed subject and agreeable term. Especially, when Arab public intellectuals began to talk about the renewal of "Arab thought", creating the illusion of cycles of renewal and development, and giving the impression as if it were an ancient cognitive structure that have been permeating the Arab public space for centuries.

As for "thought" and its label of being Arab, some thinks it is basically an attempt to link it to the peculiarities of Arabic and Arabism as core elements, which include language, culture, geography, and everything related to Arabs and their lives in the ancient, modern and present times. Therefore, to accept this definition, the Arab thought includes the contributions of many non-Arab thinkers who wrote their works in Arabic language, which is always been a part of Arab culture and its manifestations in prose, poetry, trends of thoughts, culture and religions. It is well known that several intellectual, religious and literary trends have influenced the Arabs before Islam; the most important of which are Judaism, Christianity, the Sabean doctrine along with other ideas and knowledge. That is said, it is fair to assume the Arab thought encompasses everything that is Arab, mixed it harmoniously with other cultures existed in Arabia before and after Islam. Though harmony here does not mean everything has been accomplished at one time, but in dissonance, contrast and collision at another times.

On the present day, the reference to the Arab thought, though it is understood partially as a distinguished intellectual and cultural contribution of the Arabs. But, it is widely known, on the other hand, that contemporary Arab thought is part of the Arab-Islamic thought as a whole. That includes, but not limited to, its foundations and renewal systems; its subjective and objective elements, local and global influences, personal and general adherences, constants or variables prescriptions. Hence, it is always considered as an important driver of universal thought, which reflects the aspirations of human life in all its aspects.

Therefore, when are discussing "Arab thought", we are necessarily talking about mental activity, which is certainly does not operate or permeate in an empty space. Rather, there should be data and introductions related to the Arab public life and the sphere which constitutes and manifests their material and mental contributions. And since there is cognitive activities and precursors that make up the substance of that activity, then we are to find "intellectual" products. Therefore, any definition of thought must include introductions and consequences resulting from cognitive mental activity.

Hence, before we judge the Arab thought; in essence, whether it is real or not, approve or deny it, we must agree on the perceptions and conviction held by large number of Arab public intellectuals who made their contribution to what they describe as Arab thought, stemming from Arab minds. As a result, we do not fall into an imaginary verbal disagreement over the topics of this workshop.

Dr. Elsadig Elfaqih is a former Ambassador of Sudan to Ethiopia as well as to Jordan and the State of Palestine, former permanent representative to the African Union, and former Chairman of the Board of UNECA. Dr. Elfaqih was also the former Secretary-General of the Arab Thought Forum in Amman, Jordan. He assumed many leadership positions in political, diplomatic, media, academic, research, and advisory tasks, in many places including Khartoum, Washington, London, Istanbul, Doha, Amman, Jordan and Addis Ababa. He was also a long-time media adviser at the office of President, the Council of Ministers, and Sudanese embassies in Washington and London. He worked at the Center for Research in History, Culture and Islamic Arts in Istanbul, Turkey, and as a political expert at the Ministry of Foreign Affairs in Doha, Qatar. He lectured and taught at several universities and higher academic institutions and conducted training and capacity building on media to professionals in Sudan, Yemen, and Britain, among others. Dr. Elfaqih is a writer, commentator, and political analyst. He published many research studies and articles in refereed journals, and wrote hundreds of articles in the Sudanese, Arab and foreign journals and newspapers. He specializes in political communication, international relations, and diplomacy. He studied philosophy, history, anthropology, sociology, media, political science, and the economy of development at universities in Sudan, Egypt, Europe and USA. He holds a PhD in Political Communication and Diplomacy, a Master of American Media Philosophy, and several specialized diplomas in different disciplines.

Zoom (Relevant links will be sent via e-mail to accepted candidates before the program.) 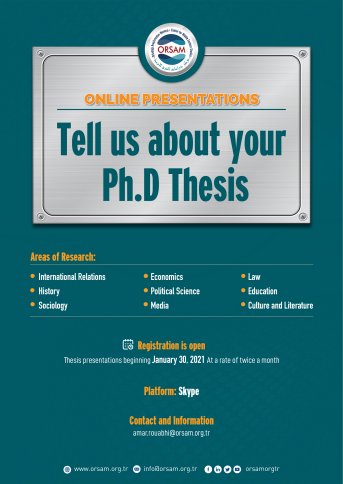 Tell us about your Ph.D Thesis

The ORSAM Center is organizing online presentations of recent doctoral theses. To increase scientific and research exchange between the Arab and Turkish academic communities, ORSAM will organize a periodic online program, twice a month (every 2... 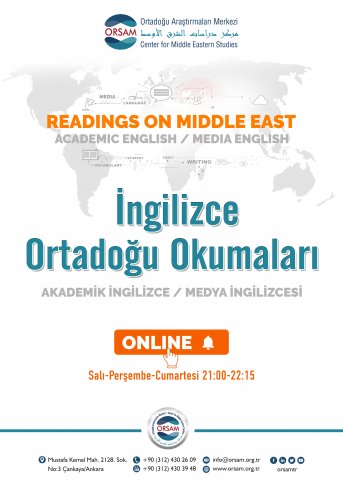 Middle Eastern Readings in English is an online ORSAM activity that aims to introduce the reader with Middle East via English texts and in this way increase grammatical as well as the Middle East knowledge of the participants. Everyone who demands...