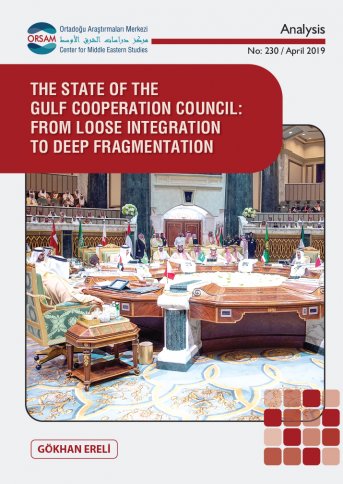 The State of the Gulf Cooperatıon Council: From Loose Integration to Deep Fragmentation

In the wake of the Arab Spring, the Gulf Cooperation Council (GCC) has shown certain signs of “loosening integration and deep fragmentation”. Analyzing a number of developments related to these signs through “alliance maintenance” can be effective. The reason why the loosening integration and deep fragmentation holds true is that foreign policy choices of the GCC member states in the post-Arab Spring period varied greatly in terms of their responses to the Arap Spring. Within this context, this paper aims to respond to a question of whether or not the GCC has durability after the Arab Spring and particularly after 2017. The main argument of this paper is that the GCC integration seems to be weakening and its already fragmented structure has been further deepened after 2017.To say that the GCC was founded only for securityrelated reasons is inaccurate, for that reason, I attempt to argue that this line of inquiry is unlikely to capture the reality as a whole.

This paper suggests that the GCC as a regional organization has witnessed a relatively weakened integration and a profound fragmentation particularly after the Gulf crisis in 2017. With the Gulf crisis weakening the integration and exacerbating the fragmentation, it could be put forward that the way the Gulf states reacted to the Arab Spring continued to affect the dynamics of the relations among them. What I emphasize here is that in the post-Arab Spring period, the policies of the GCC member states within this organization and toward non-GCC member states in the Middle East fluctuated dramatically.