The Syrian Crisis Presents Israel an Advantage about the Golan Heights 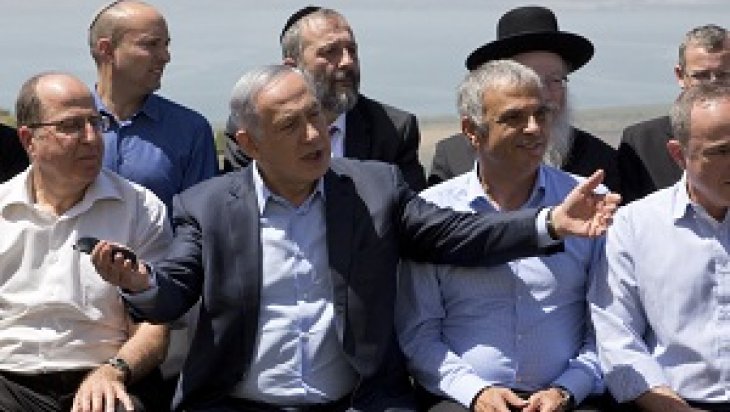 Israel is utilizing the chaotic situation and the increasing activity of radical groups in Syria as a pretext for legitimizing its position in the Golan Heights and for refusing to return in to Syria. Israeli Prime Minister Benjamin Netanyahu convened the cabinet meeting on April 17, 2016 in the Golan Heights. Originally a Syrian territory, Israel invaded the Golan Heights in 1967 after the Six Days War. In 1981, Israel declared that it unilaterally annexed the Heights. This strategically important territory has since been under Israeli rule.

The reason behind Netanyahu’s decision to convene the cabinet meeting there was to send a message to the whole world about the Golan Heights. After the meeting, Netanyahu declared that the Golan Heights will remain under Israel’s jurisdiction forever, will never be returned to Syria and the international community had better recognized it as an Israeli territory. Following his statements, major international actors such as the United States, European Union, United Nations, Germany, Russia and Arab League made statements supporting Syria’s position.

Several diplomatic initiatives and official statements followed Netanyahu’s Golan move. Netanyahu declared that he had a phone conversation with John Kerry, US Secretary of State, before the cabinet meeting. Informing the press about the conversation, Netanyahu said that he told Kerry, “Israel is not against a political resolution in Syria as long as there is nothing against its interests”. After the cabinet meeting, Israeli Defense Forces has carried out an exercise near Golan. Following the exercise, Netanyahu and several Israeli military officials visited Moscow on 21st April 2016 and held talks with Putin. It is inconceivable that all these developments can be distinguished from each other.

The quest for a political resolution in Syria moves in parallel with Israel’s initiatives towards Golan. When Netanyahu launched his move for Golan, the Geneva talks had started for devising a political resolution to the Syrian crisis. The Israeli press reported some claims that the US and Russia had agreed upon returning the Golan Heights to Syria and that would be included in the final document in the Geneva talks. The timing of Netanyahu’s Golan move sends a clear message to all sides, particularly the US and Russia, about what kind of a peace Israel is willing to accept.

Israeli officials respond to the UN statements about the return of Golan to Syria as: “Who will we return Golan to? To ISIS, al Nusra or Hizbullah?”Before the Syrian civil war, Israeli public and decision makers had discussed whether the return of Golan to Syria served Israel’s security and interests. Even the Prime Minister stated similar opinions. In the past, peace talks were held between Israel and Syria about the return of Golan. Lastly in 2008, a great deal of progress had been achieved with the mediation of Turkey. Nevertheless, as a result of the civil war in Syria, the weakening of the central authority, the near collapse of the army and the de-facto fragmentation of Syria, Israel no longer feels obliged to return Golan. Its argument is that “there is no longer a country named Syria”, therefore the conditions have changed and under new circumstances, it is not clear to whom Israel will return Golan. Israel is also utilizing the chaotic situation and the increasing activity of radical groups in Syria as a pretext for legitimizing its position in the Golan Heights and for refusing to return in to Syria.

In the recent period, the Israeli media started covering certain news about Golan in order to strengthen Israel’s arguments. These news reports suggest that the Martyrs of Yarmouk, an ISIS affiliate in the region bordering Golan, has chemical weapons that they captured from the Assad regime and they may use them against Israel. Such news, despite the uncertainty about their source and truth value, aim to convince both the domestic public opinion and the world about Israel’s security concerns with regard to Golan. Israel has, from the beginning onwards, sought to refrain from an overt position towards and a direct involvement in the Syrian crisis. It has pursued a low-profile about a crisis that is critical for its own security. Israel has acted on its presumptions about the Syrian civil war that the crisis will deepen resulting in the partition of Syria and the fading of the authority and the power of the Syrian army. Therefore, it was not disturbed about the deteriorating crisis in Syria. Accordingly, it sought to eliminate the potential and actual security risks that the civil war enabled. These risks were Iran and Hizbullah’s efforts to form a power base along the Golan border, potential attacks by non-state armed groups against Israel and the utilization of chemical weapons by the Assad regime. Israel carried out several air strikes in Syria against Hizbullah’s activities. After the Assad regime’s chemical assaults in East Ghouta, Israel managed to get rid of Syria’s chemical weapons capability without spending any efforts. As a result, Israel opted to watch the crisis on the fence hoping that the attention would shift from the Palestinian question, the rift within the Arab world would deepen, the Sunni-Shiite polarization would deteriorate and Syria would weaken and disintegrate.

Israel sees that Russia will be the most influential actor in Syria’s future and have accordingly increased its diplomatic activities towards Russia. Since Russia deployed S-400 air defense systems in the Syrian air base of Hmeymim, it has acquired the control of the Syrian air space. Despite that, Israel has been conducting air strikes within Syria both before and during the civil war. This situation requires Israel to coordinate its air strikes with Russia. After the deployment of S-400 missiles in Syria, Netanyahu met with Putin in Moscow. The statements of Israel Katz, the Minister of Transportation, remark the level and content of the communication between Israel and Russia. Katz states that the talks about Syria between Russia and Israel serve Israel’s interests in two aspects. First, “the coordination with Russia enables Israel to preserve its vital interests in Syria without Russian intervention.” The second and long term importance of the coordination with Russia is, in the Israeli minister’s words, as follows: “We should not forget that we have interests about the Golan Heights. An active communication with Russia is important in the case of a rearrangement in Syria.” As these statements show, Israel is aware that Russia has a determining influence in the future of Syria, and needs Russia’s support to protect its position in Golan.

There might also be domestic political concerns beneath Netanyahu’s Golan move. The nuclear agreement between the West and Iran is defined as a dire failure for Netanyahu. Netanyahu might have felt the need to appeal to nationalist sentiments over Golan in order to restore its image. Yet, he may face a totally different situation in Syria when the crisis is resolved. The Golan question is the only issue that the whole Syrian society and the warring factions agree upon. As long as non-state groups and terrorist organizations control territories in Syria, Israel will be able to hold on to its position in Golan. Maybe that is the reason why Israel pursues a low profile in the Syrian crisis.