Tunisia: Battle of Ideas between Animosity and Polity 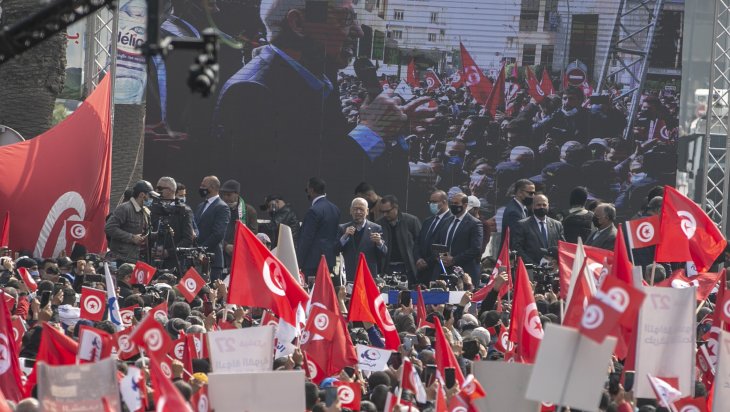 Tunisia’s political scene is witnessing a revolution that neither the deep state nor the secular intelligentsia saw coming. The al-Nahdha party has been in the forefront of Tunisian politics, either in governing the country or being a kingmaker in the new Tunisian post-Jasmine revolt in the past ten years, with a centrist foresight led by a pragmatic and visionary leader Sheïkh Rached al-Ghannouchi: Tunisia’s House Speaker.

This charismatic leader, through his political maturity, shaped the country’s fragile democracy and, more importantly, Sunni Islamist political theory and ideology. This political shift began seven years ago, with the endorsement of a senior and wiseman political leader involved in Tunisia’s politics for decades. This person was late President Bedji Caïd al-Sebssi: one of Tunisia’s post-Bourguiba system designers. His contribution had strengthened the country’s healthy political system and democratic learning process.

The late institutional struggle between the democratically-elected President and the Parliament has left political and geopolitical analysts argue that Tunisia’s political future does not look promising. This could signal a relaunch of the thorny debate that has raged between the Secularists and Islamists in the MENA region.
Politics in Tunisia is considered too complicated and as much a national sport as anywhere else in the MENA region. One could refer to the six decades-long ideological and societal dispute that marks the relation between these ideological protagonists as: the traditionalists vs. the “modernists.”

Politics of challenges
It seems that Tunisia has passed through a period of transitional testing to end a quarter century of political police patronage under the Ben Ali regime. Thus, the pro-Ben Ali and the secular intelligentsia did not kindly swallow the loss of power or its control of Tunisian politics and public mindset. They participated in national politics for six decades with the Bourguiba and Ben Ali regimes. Using the alibi of defending the country from the danger of the “Green Peril” (Islamism), they have been leading the al-Nahdha party’s leader to a fatal mistake.

In a parallel with Turkey’s politics, in 2008, the military and the secularists vehemently opposed the candidacy of Mr. Abdullah Gül, then Turkey’s deputy prime minister and foreign affairs minister, for the post of President, warning Turks and the rest of the world that Turkey would descend into chaos if he were elected. But this effort at intimidation failed, as it did in the attempted coup of July 15, 2016. Also, Algerian generals, in hand with the secularists, had used the same fear tactics in January 1992; a similar strategy that occurred in Egypt in July 2013 when General al-Sisi overthrew the democratically-elected president Mohammed Morsi and threw him in jail until his last breath, using the same alibi used in Turkey in 2008, and Algeria in 1992, in an act portraying itself as the “guardians of the Republic” through scaring the masses and their Western protectors.

This would clarify two imperatives: that the Islamists have become a serious political force acting from the center of power and that they are no longer relying on the polls to sustain their legitimacy. In reality, they are a real force of change in their countries.

The fact that these plots have been uncovered show a clear sign of the growing maturity of democracy in Turkey. The AKP government had survived a coup, and, as a result, is in process of moving forward for a better Turkey, despite the micro-economic challenges that it has been facing lately.

Militancy, obstruction and rejection
These days, serious leaks are witnessed between Carthage and Bardo Palaces’ bridge. This might lead to the burning of this fragile bridge between President Kaïs Saïed and the Parliament Speaker Sheïkh Rashed al-Ghannouchi. The cabinet’s reshuffle, voted by the Tunisian MPs on January 26, is rejected by President Saïed. Furthermore, the absence of a Constitutional Court to arbitrate has made this relation toxic, because only the President is the protector of the Constitution.

Seven years after its creation in the 2014 constitution, Tunisia’s Constitutional Court remains vacant. Tunisia has been unable to find an agreement on the 12 judges of the court. Today, Tunisia needs to enhance the court’s creation in order to be able unlock the ongoing political impasse between the President and House Speaker on one hand, and the obstructionist Ms. Moussi, the Chairwoman of the Free Destourian Party (PDL), on the other. She is the darling lady of the secularists in Tunisia and the ‘godfather’ of the counter-revolution.

A tension is making the relations between the President and the House Speaker more complex. Tunisians are more worried about the COVID-19 pandemic than an eventual coup against the House Speaker, or an early presidential and parliamentary election.

Yet, despite President Saïed accepting the principle of the Supreme Court, while expressing reservations about the members, the Parliament session was postponed to April 8 to discuss the new mechanism of Tunisia’s next Supreme Court.

While the fight continues over Premier Mechichi‘s new cabinet, he was promoted to Minister of the Interior, then to Head of Government by President Saïed before he turned his back on his “protégé”. He allied himself with the parties that had offered a majority in the parliament, with the support of the al-Nahdha Party and the Qalb Tounes Party. However, President Saïed saw this alliance as a “betrayal" of his action: a deal that was made to breakthrough and smooth up the relations between his office and the House.

Socioeconomic crisis
The socioeconomic crisis is raging in Tunisia, while politicians are allowing themselves to be ridiculed by Tunisians. Thus, the rating agency called Moody's downgraded Tunisia for the ninth consecutive time since 2011, making it almost impossible to exit the international financial market to find the seven billion dollars needed to complete the 2021 budget. Premier Mechichi and Parliamentary President Sheïkh al-Ghannouchi are sending signs for help towards the U.S. administration to step up and come to help Tunisia’s fragile economy.

On the other hand, the International Monetary Fund (IMF) has already issued its conditions, reiterating its demand to lower the overall civil service wage bill from the current 17.5% of the country’s GDP to 14% by 2023. In 2017, the IMF requested to reduce the same cost of the civil service from 14.5% to 12.5% ​​of the national GDP by 2020.

In addition, the IMF calls for political stability in order to relaunch a new wave of investments and start the process of economy recovery, but the semi-political crisis that has been blocking the function of the country’s democratic institutions is seriously paralyzing the entire country, adding a health situation that has struck the economy a great deal. There have been 246,507 confirmed cases of COVID-19 in Tunisia with 8,610 deaths, and a vaccination process is only functioning at a slow pace.

Tunisia is a rich country with promising agriculture products and natural resources such as phosphate, which has fallen by more than half since 2010. During the decade of the Yasmine Revolution, four million tonnes, with 20,000 employees working at the national Phosphates Company (CPG), has been located in the central city of Gafsa.

Oil and natural gas are virtually in the same situation, except that Tunisia produces less than 100,000 barrels per day. The airline TunisAir is practically in undeclared bankruptcy: another sector that was terribly impacted by the COVID-19 pandemic. Tourism in Tunisia is the second lung of the country’s economy, with 6,500 employees working with six operational and fifteen grounded planes, sidelined for troubleshooting. Suppliers are refusing purchases on time. National electricity, water, railroads and many other sectors are going through the same difficulties.

In sum, one hopes this animosity between the Tunisian political leaders and elite will not be reduced to yet another ideological showdown between the Islamists and Secularists. However, this could signal the establishment of the control of the real representatives of the people over the former oligarchic system and intra-society policing state. Though there is a confirmation that elections are a means of polity, they include the application of the rules of laws as all Tunisians indicate, which is an episode that should definitely be followed.