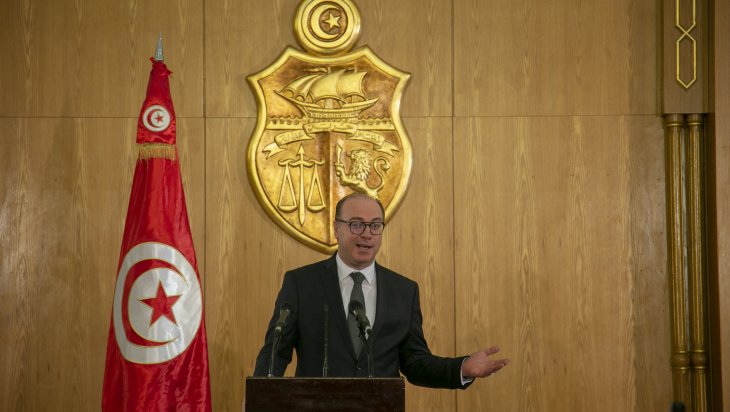 Tunisians have been very busy. People in coffee shops, barber shops and taxis are talking and it’s not about soccer anymore or the propane gas shortage in their kitchens. The hot topic is whether Tunisians will have a government. Four months passed after the legislative and the presidential elections, and Tunisians are still waiting to know where the country is heading.

The newly designated premier, Lyes Al-Fakhfakh, has decided to form an independent government without the Qalb Tounes Party, despite the persistence of the house speaker, Sheikh Rached Al-Ghanouchi, whose party's high consultation counsel (Majlis al-Shura) decided on Saturday afternoon, that it would only join a unity government that brings together parties from across Tunisia's political spectrum.

Yet the An-Nahdha Party, which is pushing for a national government and the presence of the Qalb Tounes Party in the Al-Fakhfakh national government, is creating the An-Nahdha Party-Qalb Tounes Party odd couple in Tunisia’s politics. Today this odd couple pushes for change that includes political forces, elite, and independent forces who are not ideologically on the same path. Premier-designate Al-Fakhfakh sees Tunisia being on a new political and economic trajectory. Therefore, he suggests the introduction of new economic reforms to tackle Tunisia’s big financial and economic challenges.

We might ask, “why not?” Tunisia and Tunisians are further down the road since the successful story of their “Jasmine Revolution” in 2011. This time, however, Tunisians are eagerly looking for real change, and results that will change their lives, not for continuity or the revolutionary bloc’s version of change, (or worse, the deep state’s version of change) and Ben Ali’s system recidivists.

Premier-designate Al-Fakhfakh’s return is seriously intruding on the House of Ben Ali. He establishes a mechanism for the implementation to fight corruption and cronyism, demanding assurances for fair and honorable support from the An-Nahdha Party to consider the option to govern and lead comfortably. His program has already seduced opposition leaders, among them the sympathizers of the parties, whereas An-Nahdha Movement Party, with 54 out of 217 MPs in parliament, is playing hardball and insisting on being in a national government.

Premier-designate Al-Fakhfakh’s bold decision to not include the Qalb Tounes Party in his government goes with the desire of large grassroots organizations who are vehemently behind him. Nonetheless, according to the new dynamic after the death of President As-Sabssi last summer, that emerged in light of the last fall legislative and presidential elections, he must have an endorsement of a major political party like An-Nahdha and its allies in the Tunisian parliament. He must have this endorsement not only to pass its program, but also to sustain the president’s political capital that he massively earned in his election. This is a political imperative that will enhance Premier-designate Al-Fakhfakh’s government not only in terms of economic and social policies, but also in the provincial counsels, which are the political backbone of President Kaïs Saïed.

However, the idea that Premier-designate Al-Fakhfakh could bring political unity and governmental stability, that ironically the An-Nahdha Party is aiming for, would change the dynamic of Tunisia’s political course. This political course today is a duel between the An-Nahdha Party and its timid alliances on one side, and the left bloc, the Free-Destour Party, and the ex-oligarchs. So, the return of Premier-designate Al-Fakhfakh into the arena would be seen as an alternative for the Tunisians, changing the long rivalry between the An-Nahdha Party and the oligarchs on one hand, and the anti-An-Nahdha Party axis. This has been a rivalry that is often described as a sentiment between political stability and democracy and a rhetoric that led western powers and some Arab countries to prefer the former for the sake of the region’s “stability,” and anti-political Islam rhetoric.

Whether Premier-designate Al-Fakhfakh has the guts and the support to challenge the entire establishment and the remaining elements of the deep state that Tunisians have been fighting against since 2011 is yet to be seen. Tunisia has been governed by awkward coalition governments since 2012. This was when President Moncef al-Merzougui came to Carthage Palace, even though, the Tunisian establishment, moderate left parties and labor union elements “tolerated” a legalist Islamist government to lead. On the other hand, the Islamists have been playing a fair game, opting for a pluralist constitution, freedom of the press and information, and accepting critics and protests. This is why the meaning of the An-Nahdha Party’s desire for political overture and political ruse has unveiled the party’s mask and undressed the king/Skeïkh.

Today they are seen as obstructionists. "The An-Nahdha Party's decision will put the country in a difficult situation," said the Premier-designate Al-Fakhfakh.

Since 2011, the An-Nahdha Party was in the eye of the storm and in the center of the Tunisian political debate, raising fears for some and hopes for others. Yet nine years later the party today is doubting its future, struggling to prioritize its objectives and, to some extent, answering questions that disappointed his sympathizers and even some leaders who are leaving the ship.

Premier-designate Al-Fakhfakh is clearly asking for a second revolution of thought within Tunisia (the godfather’s black box), as well as making a deal with the neo-Islamists post-Rashed al-Ghanouchi, the house speaker, whose political career and militancy are behind him. This  could create a new era of thinking in the Tunisian political elite, which would allow public opinion to readjust its sociopolitical demands to trust Premier-designate Al-Fakhfakh and the President Kaïs Saïed administration.

Nevertheless, the obstacles are difficult to overcome. In the complex Tunisian constitutional system (which is a semi-presidential system) good intentions and serving the country don’t rhyme with the system’s political reality, that is to say, unless Premier-designate Al-Fakhfakh is brave enough to enter into a gladiatorial fight against the system’s sharp machine that is mainly guided from Paris and Abou Dhabi. Hence, he still has time to consider his options. He is not underestimating the deep state’s and the counter-revolution’s actors’ means and actions.

Undoubtedly, the designated premier’s return is a moment of truth for millions of Tunisians, who are looking forward to the challenge and a better future in Tunisia, and not elsewhere. In the meantime, the oligarchs and their guardians will do anything to sell their truth.

One can hope that politics won’t be, as usual, getting into the business of regional politics. Tunisian voters don’t want to see another dull period of politics and hypocrisy of a Greek tragedy play in the headlines and on the front pages of the papers. More importantly they don’t want to hear about an early election if this government is sunk and the president would apply Article 89-4 of the 2014 constitution.

People in coffee shops, barber shops, and taxis would be feeling sorry for all Tunisian politicians and elite, who are so far enjoying the parties’ cake. However, as long as the pastry knife is still in the voters’ hands, Premier-designate Al-Fakhfakh should aim to make Tunisia a better place for all Tunisians and not only to form a government that might just collapse in months.

Abdennour Toumi | 09.06.2021
The relations between Madrid and Rabat are heating up, following the last month’s influx of Moroccan and sub-Saharan migrants to the Spanish...