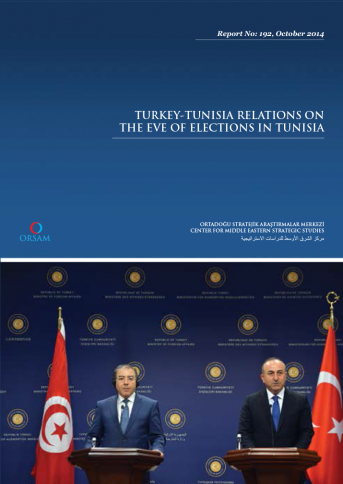 Turkey-Tunisia Relations on the Eve of Elections in Tunisia

Tunisia is undergoing a transformation process, which was triggered by the street protests. The street politics in Tunisia has left its place to institutional politics more quickly than other examples of the Arab Spring. Especially in the post-2011 period, the integration of non-governmental organizations and Tunisian youth via the institutional structures broke the power of street politics and enabled the shift of the location of political struggle from streets to political structures. Thus, Tunisian politics has been stabilized after ensuring the normalization of the political processes.

However, the constitution writing process in Tunisia progressed in the shadow of intensive discussions, economic challenges and political crisis. After 2011, the assassination of opposition leaders Chokri Belaid and Mohammed Brahmi raised the security concerns, while the ongoing culture war over the constitution writing has dragged the country into political polarization. Especially, with the impact of the coup d’état in Egypt, Tunisian opposition repositioned themselves into a more radical political line and this has led to the rise of tensions. In the region, where disputes are generally solved by power and oppression, Tunisia demonstrated the ability to resolve the political stalemate through negotiations. Today, Tunisia is preparing for presidential and parliamentary elections that will take place in October and November under the leadership of a technocratic government.

The relations between Turkey and Tunisia, the unique country that sustains the hopes for Arab
Spring, has continued to increase in the period after 2011. Turkey has provided important contributions to Tunisia’s democratization process, the solutions of socio-economic problems and stabilization of country in the post-2011 period. It is clear that Turkey will continue to play a key role in the period ahead in Tunisia in order to support the normalization of social, economic and political life, as well as the stabilization and democratization of the country.
Therefore, this report aims to contribute to the understanding of the current status of Turkey-Tunisia relations.

The report is structured into three parts. In the first part of the report, the post-2011 era in Tunisia is examined within the context of the dynamics of democratization. The second part is devoted to Turkey-Tunisia relations. In the last section, Tunisia-Turkey relations are studied in the context of the expectations and challenges.