Why does Turkey hit PYD/YPG? 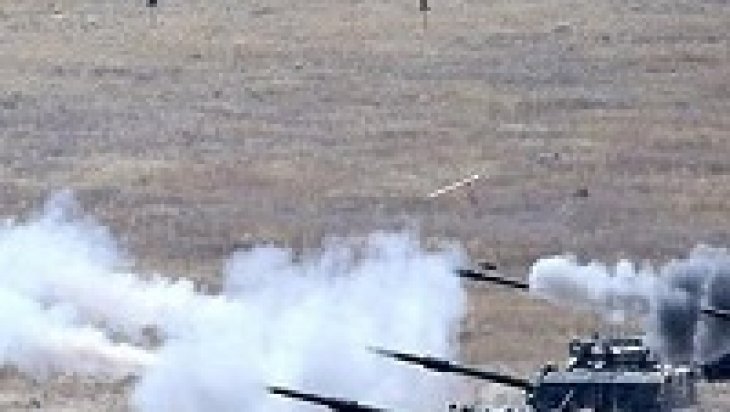 As long as the the civil war in Syria prolongs the Turkish perspective on the priorities and threat perceptions for Syria started to change. Local and non-state actors have gained power with the weakening of the central authority in Syria. There have been two rising powers in this process: ISIS and YPG. Both of these actors are regarded by Turkey as terrorist organizations, and both of them are active in the border region between Turkey and Syria. This means that there are new threats other than Assad regime to Turkey from Syria.

As a part of the coalition against ISIS, Turkey allows the use of Incirlik Air Base for the fight against ISIS, and Turkey itself conducts cross border attacks targeting the terrorist organization. However, there are disagreements between Turkey and its allies on relations with YPG that almost reaches to the extent of crisis. These disagreements are among many countries, especially Turkey and USA and Russia. Turkey regards PYD, which claims that it represents Syrian Kurds, and its militia force YPG as the Syrian branch of the PKK. Opponents of this view, argue that YPG is different from PKK, and YPG is the most reliable and successful actor in the fight against ISIS in Syria. PYD is an organization that was established by the decision of Ocalan, leader of PKK, in 2003, and it is still one of the components of KCK. Advocates of the idea that YPG is different from PKK are probably aware of the fact that the relationship between PKK and YPG is more than just an organic link. However, they consider it necessary to make this distinction due to their political evaluations and short-term goals.

Recently the differences between Turkey and other countries on the topic of the YPG have evolved into a crisis. The main reasons of this crisis can be the outbreak of conflicts between Turkey and PKK with the end of the solution process, the fact that YPG has changed the balance in the north of Syria in its own favor, the increasing support from USA to YPG, and Russia’s support to YPG as a tool for punishing Turkey.

The opportunities for cooperation between USA and YPG have been restricted to Jarabulus and its west due to the increasing criticisms by Turkey and Turkey’s declaration of YPG’s crossing of west of Euphrates as a red line. At this point, Russia has come into play. Russia, ignoring Turkey’s sensitivity, and even playing upon its concerns due to the warplane crisis, has encouraged YPG to advance in the west of the Euphrates. YPG tried to advance in Azaz through Afrin to capture Azaz-Jarabulus border strip in order to create a contiguous territory in northern Syria, which is YPG’s ultimate goal.  Russia tried to contribute to YPG’s efforts by providing logistical and air support. As a result of YPG’s attempts, Turkey started to shell YPG positions since the second week of February.

Turkey’s shelling of YPG was approached in a critical way by Western media and PKK sources. According to this approach, "Turkey was shelling Kurds in Syria and undermining fight against ISIS". According to PKK sources, "these attacks were the evidence of Turkey’s support for ISIS". All of these approaches and claims are problematic for Turkey. Why Turkey is targeting PYD/YPG can be analyzed in the following way:

-  YPG, ignoring Turkey’s concerns, wants to form their own administration at the border by getting support from external actors. It prevents Turkey’s reach to the Middle East, as Syria is the door that connects Turkey to Middle East, by setting ground for the settlement of external actors on the border.  YPG does not want Turkey to be involved in the game although it is acting against Turkey.

- YPG tries to gain legitimacy on the basis of war against ISIS. ISIS has become a tool for YPG to create a contiguous territory which is YPG’s ultimate goal. In this way, YPG legitimizes its war in the regions that Kurds do not live. However, it is the way YPG legitimizes its advance in Azaz with Russian support is highly questionable. In that region, there are no ISIS elements. YPG clashes not only with ISIS but also with armed militants that are supported by Turkey and Western countries. While YPG attacks Turkey’s allies, it is unable to understand Turkey’s reaction.

- After the retreat of Syrian army on July 2012, PYD/YPG seized the territory where Kurds are densely populated. Since that time, YPG has become the actor that gained most territorial acquisitions. In time, YPG has become expansionist towards Arab and Turkmen regions where there is almost no Kurdish population. The capture of Tel Abyad by YPG is critical in that sense. YPG still keeps the control of the city in its hands although it carried this operation with the forces of Free Syrian Army. In Azaz-Jarabulus line, which YPG sees as an ultimate goal to capture, there are settlements densely populated by Turkmen. The local community refuses to live under the control of YPG. However, YPG tries to take control of this region forcefully with USA-Russia support. YPG’s expansionist policy plants the seeds of historical hostility among the communities that live in the Syrian-Turkish border. This emerges as a risk factor that leads to long term instability at the Turkish-Syrian border.

- YPG, like ISIS, has trans-border goals. Turkish-Syrian border has no meaning from YPG’s perspective; YPG does not respect for borders. It sees the war that it fights in Syria as supportive for the fight in the four countries where Kurds live. The fact that YPG’s goals are not limited to Syria increases the security concerns of Turkey. These concerns are materialized in the examples of passing of arms, ammunition and fighters from Kamisli to Nusaybin, from Kobani to Suruc, and from Afrin to Hatay. According to YPG’s perspective, the fight in the north can be supported more easily when the fight in Syria is over and YPG gains political status. It is obvious that this approach will risk Turkey’s territorial integrity in the long term, or at least it will create new security risks.

- YPG carries its experience and military capacity it acquired in Syria to Turkey through PKK. Moreover, there is an increase in the claims which state that YPG, through PKK, is using the weapons, which it has got to fight against ISIS and which are suitable for urban fighting, against Turkish security forces.

- YPG does not allow other Kurdish actors to be active in the regions in Syria which are densely populated by Kurds. This prevents Turkey’s approach to the region on the basis of opportunity and cooperation as in the example of Iraqi Kurdish region. YPG also tries to remove the connection between Turkey and Kurdish citizens in Turkey by defining Turkey’s position against PYD/YPG due to its security concerns as “Turkey is against Kurds”. In this respect, YPG undermines Turkey’s efforts for social integrity and peace. At the same time, it causes Turkey to be seen as in a position against Kurds at the international arena.

- YPG forces social groups that it sees as a factor for instability in long term to migrate. While it allows Kurds, who are minority in Tel Abyad, to come back, it does not allow Arabs and Kurds to come back. Moreover, PYD oppresses social groups, which Turkey feels responsible for, and it pushes these groups to migrate to Turkey.  It commits war crime according to the reports of international institutions and gives rise to long term conflicts at Turkish borders. When there is an attack to Kurdish civilians or they are forced to migrate, YPG opposes this, however, when YPG itself do the same thing, it wants to be tolerated. Due to the sympathy it gains from its fight against ISIS, YPG is tolerated.

- PYD/YPG tries to get support from external powers by trying to demonstrate Turkey as an actor that supports ISIS. It argues that Turkey should not see PYD/YPG as a threat; however, its political discourse is based on its hostility to Turkey. In this way, PYD/YPG increases Turkey’s security concerns. Although YPG has this hostile approach towards Turkey, it criticizes Turkey’s reaction to its efforts to form actual state forcefully at the Syrian border.

- From the Western perspective, ISIS is the most prominent threat in Syria. On the other hand, from Turkey’s perspective it is not meaningful to rank priorities in terms of threats from ISIS and PKK/YPG. What determines a terrorist organization as a threat to target state is not about how brutal execution methods that organization use or whether its ideology is Islamist or secular. What is important is how that terrorist organization threats vital interests of a state.  In line with this, ISIS is a brutal terrorist organization and a serious security threat for Turkey. However, PKK is a vital threat to Turkey. Hence, it is meaningless to ask why Turkey targets YPG, while YPG has become a tool for threatening vital interests of Turkey.