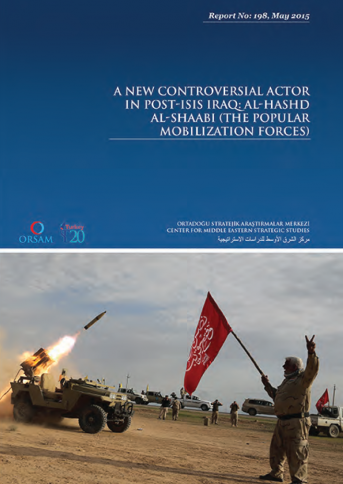 The ongoing instability in Iraq’s domestic politics and deepening insecurity gained a new dimension after the capture of Mosul by the ISIS in June 2014. The ISIS reinforced its position during the period of the governance crisis caused by Nouri al-Maliki’s insistence on his third term, despite objections, after the general elections of 30 April 2014. Hence, the Iraqi security forces proved inefficient against the advance of the ISIS, which ended up establishing its control on almost one-third of Iraq after capturing Anbar, Tikrit, Diyala, the south of Kirkuk and the north and south of Baghdad, as well as Mosul. As the ISIS started to pose a growing threat to both Iraq and the Middle East, the security and political balance in Iraq have changed and new alliances, entities, formations and actors have begun to determine the Iraqi politics.

Initially founded for supporting the Iraqi security forces, al-Hashd al-Shaabi has attained the position of the main and lead actor in the fight against the ISIS. While the institutionalization efforts for al-Hashd al-Shaabi has been going on with the support of the government, new problems related to the proliferation of militia groups have emerged. Controversies among different groups, these groups’ activities especially in Sunni regions, and Iran’s influence on these groups through the Iranian commanders assigned to Iraq have become the new hot topics in the fight against the ISIS. In addition to detailing the formation process of al-Hashd al-Shaabi, this study offers a detailed account of its structure and the militia groups within this bloc. In addition, this report includes analyses and assessments on the problems regarding al-Hashd al-Shaabi in the current and post-ISIS period. As it is one of the most comprehensive studies in the field in terms of its subject and scope, We hope it will be useful to the readers.