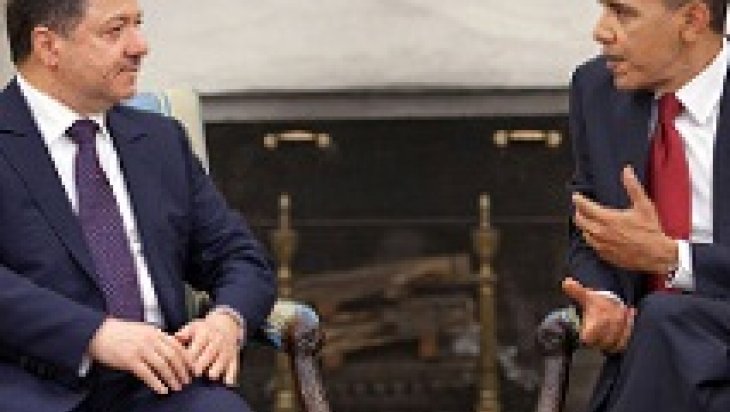 A complex portrait emerged in Iraq with ISIS and other recent developments and solution of this situation seems quite difficult. Within this context, Kurdistan Regional Government of Iraq (KRG) and Kurds appear as the ones who have profited most. Especially in northern Iraq, Peshmerga’s becoming the main force against ISIS has widened KRG’s sphere of influence. US-led international coalition’s conducting first air strikes when ISIS got closer to Erbil might be taken a significant sign that shows KRG is being protected. This also brings the perception that wiping out the accumulation of 12 years of stability in KRG is not wanted. In this sense, incidents that took place during Massoud Barzani’s US visit in May have paramount importance to look into. Barzani had gone to US with the independence rhetoric, and the US replied with its dedication to Iraq’s territorial and political unity. So, although Barzani mentioned the idea of “independence” at every platform in the US, it seems that he could not get the support that he was expecting from the US within the current conjuncture.

Despite what happened during Barzani’s visit, his visit’s taking place after Iraqi Prime Minister Haider al-Abadi’s US visit can be taken as a result of the efforts to set a balance between Erbil and Baghdad. At this point, the position that Erbil will take in the post-ISIS era is extremely important. In a process where all sides in Iraq declare their will for living together and the perception that in the post-ISIS era more disintegration will be seen in the country, Massoud Barzani’s mentioning “independence” discourse constantly in international platforms has characteristics of a propaganda. Likewise, both regional equation and developments in Kurdish domestic politics bring uncertainties regarding KRG’s independence.

First of all, although the common enemy, the ISIS problem, brought closer Erbil and Baghdad, it is observed that both sides are politically moving away from each other. KRG is trying to strengthen its position and widen its sphere of influence. This position has a capacity to lead tense relations between Erbil and Baghdad in post-ISIS process. Furthermore, the fact that the region KRG is trying to widen its sphere of influence is populated by Sunni Arabs and Turkmens might also ignite ethnic tension. Since this condition brings Kurds to a point of conflict, it might cause a backward acceleration of the post-2003 political, administrative, and economic gains that Kurds have obtained.

On the other side of the story, it does not seem possible for KRG to step towards independence without ensuring its economic unity. This condition is one of the main concerns of Kurdish leaders and politicians. A closer look would reveal that the biggest crisis that has taken place between KRG and Baghdad is on the budget. Erbil claims that Baghdad does not properly send KRG’s 17% share from the budget. Thus, KRG is having problems in paying salaries of its civil servants and labors due to cash money problem. Even more, because companies conducting business cannot get their payment, they are stopping their activities in KRG. For this reason, KRG is trying to increase its oil production and exports as soon as possible. However, it can be stated that it is not possible for KRG stand up on its feet in the short term. It is known that KRG is making efforts to include Kirkuk in order to make a move for incomes. Kirkuk has the capacity for KRG to make an economic breakthrough in a short time with its oil reserves and the low production costs, almost as low as 1/5 of the world average. But, Kirkuk’s ethnic, religious, and sectarian diversity, its economic value, and strategic position bring debates over Kirkuk’s status. Although Kurdish groups have Kirkuk’s administrative and military control, one-sided steps would cause new problems.

In addition, Kirkuk issue also reveals the struggle within the Kurdish domestic politics.  It is possible to state that the group that has control of Kirkuk will grow stronger in KRG domestic politics and even might become the executive of the politics. For this reason, there is a major rivalry between KDP and PUK, biggest two parties of KRG. KDP is trying to curb PUK’s influence in Kirkuk, which has been historically under PUK’s sphere of influence, bring Kirkuk closer to Erbil under its control, and strengthen its own position in KRG. These efforts make a potential conflict between KDP and PUK highly likely. Indeed, examples of this conflict were witnessed before the 30 April 2014 elections. Also, Kirkuk is not the only hotspot in the conflict between KDP and PUK. Two parties still have their separate security and intelligence apparatus in KRG. Furthermore, monetary unity in KRG has not been completed either. For these reasons, it is observed that KRG has still been unable to implement the institutional unity needed for a potential “independence” and will not be able do that in the short run.

While KDP-PUK dispute and leadership struggle within PUK are focal points in Kurdish domestic politics, the “secret dispute” between Nechirvan Barzani and Masrour Barzani is often neglected. However, this cleavage within KDP has a higher potential than the dispute within PUK in terms of its having an impact on KRG. In the current situation, Massoud Barzani’s nephew and son-in-law Nechirvan Barzani is KRG’s Prime Minister, and his son Masrour Barzani appears as the most effective man in the intelligence and security apparatus. In addition, Massoud Barzani, whose term were prolonged for two years disputatiously, is supposed to leave presidency in August 2015. While whether Massoud Barzani would leave presidency is a hot topic, who would be the next president in the process after his leaving is another one. So far, Massoud Barzani has not given any signals for leaving the position and is trying to strengthen his hand. It is possible to read his messages on “independence” previous to the US visit in this sense. Barzani is trying to be “the pioneer of the independence” and is giving the message of “I’m the national leader” with his visit to Jalal Talabani previous to his visit to US. This message signals that Massoud Barzani will try to have an impact on Kurdish politics as a “supra-institutional” figure even he leaves KRG presidency. But in a situation where Barzani leaves the presidency and continues to get involved in high politics would cause significant problems in Kurdish domestic politics. Kurdish opposition perception, which emerged especially after 2009 in KRG, might unbalance Kurdish domestic politics. For these reason, although “independence” discourse is “exciting” news for Kurdish public in KRG and Middle East, untimely and unbalanced steps might bring results that would take away Kurdish gains in post-2003 process. Likewise, developments in Iraq, regional equations, and Iraq’s neighboring countries’ initiatives’ in KRG’s and Iraq’s future positions should also be taken into account.