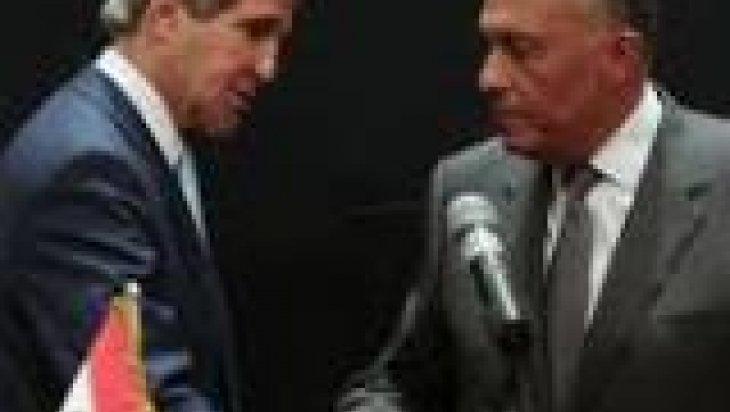 US President Barack Obama, after being elected president in November 2008, paid his first diplomatic visit to the Middle East and gave a speech to the Muslim world in Cairo. In the speech he delivered in Cairo University, Obama voiced that the United States and the Middle East would have a "new beginning" and advised the people of the region “not to be afraid of change” by calling them to "choose the right path, not the easy way." Later, many saw Obama's historic speech in Cairo in 2009 as a sign of a policy shift by the US government: the US was addressing the people of the region instead of the regimes. Likewise, when in 2011 the winds of change began to blow in the region, Obama addressed the people once again. In this second speech, Obama said that regional change is inevitable; the people of the region prefer non-violent and peaceful protests instead of terror acts. He stated that the US would not accept the regime to apply brute force to protesters and that it was ready to give any diplomatic, economic and strategic support for change. However, the US had to face one of the most critical challenges in the region when the transition process in Egypt was stalemated after the coup in 2013.

The US Secretary of State, John Kerry, had invested remarkable efforts to normalize the relations between Egypt and US, which got tense after the coup. Kerry’s guarantees to release military assistance that has been suspended since 2013 and the acceleration of diplomatic visits indicate that the security dimension is becoming increasingly more decisive in US foreign policy toward Egypt. Therefore, Kerry's visit to Egypt on June 22, 2014 as part of his diplomatic tour to the Middle East is quite important. During his visit, Kerry met with the newly elected president of Egypt, Abdel Fattah el-Sisi, and with Foreign Minister Sameh Shoukry. Kerry’s visit is the highest-level American visit to Egypt since President Abdel Fattah el-Sisi took office in May. In addition, Kerry held a joint press conference with Foreign Minister Sameh Shoukry and commented about his visit. At a press conference, Kerry reiterated his guarantee to release an amount of the suspended $ 1.3 billion in military aid and promised to deliver ten Apache attack helicopters to Egypt.

The Obama administration decided to suspend the 40-year long military aid to Egypt, after President Mohamed Morsi was toppled on July 3. With this decision, the shipment of ammunition and arms to Egypt was completely halted towards the end of July. Both in the US Congress and in the international community, this decision was found insufficient when the US-propagated democratic values were taken into account. Despite this, the US military assistance to Egypt was stopped for the first time in the last forty years. The US approach in the post-coup era was criticized by the Egyptian regime but still failed to force Egyptian regime to change its internal policies. Moreover, Egypt decided to make arms deals with Russia for advanced weapons systems. In addition to suspending the military aid, after the coup, the US withdrew its ambassador in Cairo who had been in charge since 2011. After the withdrawal of US ambassador Anne Patterson, the US downgraded the relationship to the level of chargé d'affaires in Egypt.

Return to "Strategic Cooperation" under the Shadow of the Coup

After the relations between the two countries worsened, which was embodied by the suspension of American military aid and the withdrawal of the US ambassador, the US has tried to ease the tension. In November 2013 the US Secretary of State John Kerry visited Egypt for the first time since the coup in order to normalize the relations. In April 2014, Kerry brought the issue of suspended military aid on the agenda and confirmed that security cooperation between the United States and Egypt still continues. He has also said that the US will fulfill its Camp David obligations and that he informed the US Congress about releasing the suspended military aid. Shortly after this statement, the Egyptian Foreign Minister Nabil Fahmy made his first official visit to the US after the coup. During this visit he met with Susan Rice, the President's National Security Advisor, and with Chuck Hagel, the US Secretary of Defense, and emphasized that cooperation in security and the fight against terrorism are important aspects of the US-Egyptian relations.

Kerry's statement and Fahmy's visit to the US show the efforts for normalization of US-Egypt relations. The most important development in this context is the US decision to deliver ten Apache attack helicopter to Egypt in order to support the Egyptian operations in Sinai. However, the US Congress reacted unfavorably to this decision of the Obama administration and has partially blocked it for now. The Obama administration also planned to release $650 million of the suspended military aid, but it was frozen again due to opposition that was led by Senator Leahy. However the opposition in the US Congress is unlikely to last long, especially considering the pressure that is coming from Saudi Arabia and Israel.

Withdrawing its ambassador from Cairo and suspending the military aid, which had been delivered regularly for forty years, fails to live up to the “democratic agenda” that Obama set in his 2009 Cairo speech. Although these two measures indicate a significant shift in US foreign policy, the US failed to take drastic steps to change its long-lasting relations with the current authoritarian regime in Egypt. Withdrawing the ambassador from Cairo and suspending military aid might not be enough to fix the passive image of the US. Moreover, the US has been making efforts to normalize its relations with Egypt since the Fall 2013. At this point, it seems that the US is choosing “the easy way, not the right way.” Since 2011, the US has entered a challenging period, as it is torn between the discourse of stability and order with its authoritarian allies and the democratization agenda that was adopted by George W. Bush. This situation may cause the US to reverse its previous policies. However, the developments in the Middle East of the last three years make it impossible for the US to reconstruct stability by maintaining its old political stance. Therefore, a new stage in Egypt-US relations has started with agreements on security, stability and counter-terrorism, which will likely raise further challenges.