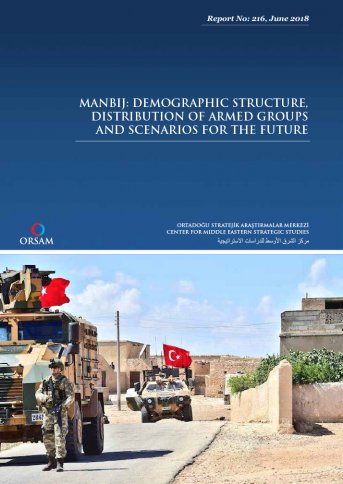 Manbij: Demographic Structure, Distribution of Armed Groups and Scenarios for The Future

The rising terror threat in Syria affected the priorities of Turkey’s Syria policy. The strengthening of two terror organizations, namely DAESH and YPG, and their reclamations of sovereignty in the regions at the border with Turkey put forth the fight against terrorism in Turkey’s Syria policy. In an environment where the state authority of Syria weakened, Turkey wanted to reduce/eliminate the security threats arising from Syria with unilateral use of force by paving the necessary diplomatic ground. Within this scope, Euphrates Shield and Olive Branch operations were launched respectively in August 2016 and January 2018. By this means, both DAESH threat was removed and YPG threat was restricted to the west of Manbij and the Euphrates.

However, it is seen that YPG still keeps under control both a geographically large zone and economically the wealthiest regions of Syria when we look at the current maps showing the control zones of the actors involved in the Syrian civil war. Therefore, YPG threat will maintain its presence even though it has been restricted. The USA being the ally of YPG in the field makes the situation more complex. Turkey insists on solving the YPG problem in cooperation with the USA but the USA searches for a formula that will not turn YPG, its ally in the fight against DAESH, adrift.

Turkey had already been expected to set Manbij as its next target after ending YPG control in Afrin. Turkey’s military success in this operation led the USA to review its YPG policy. Within this framework, the USA felt the need to take a step in terms of Manbij, with Turkey’s increasing pressure. After the meeting in which the Foreign Ministers of Turkey and the USA came together in early June 2018, it was declared that two countries agreed on a road map to follow in Manbij. The success or failure of the model to be applied in Manbij will be a development that will also seal the fate of the east of Syria. Manbij might even have significant effects on the course of Turkey-USA bilateral relations in general terms. In this regard, we believe that the issue of Manbij should be followed closely.

ORSAM Coordinator of Syrian Studies Oytun Orhan has carried out a field study in al-Bab, Cobanbey (al-Rai), Jarabulus and Azaz in the Euphrates Shield region in Syria as well as in Gaziantep and Sanliurfa, the cities bordering Syria in order to reveal a clear image in Manbij. The ORSAM analysis that you are about to read has been prepared completely on the basis of the information obtained in this field study. We hope that the study will contribute to the Manbij debates that will come to the agenda more frequently in the near future. Enjoy your reading.