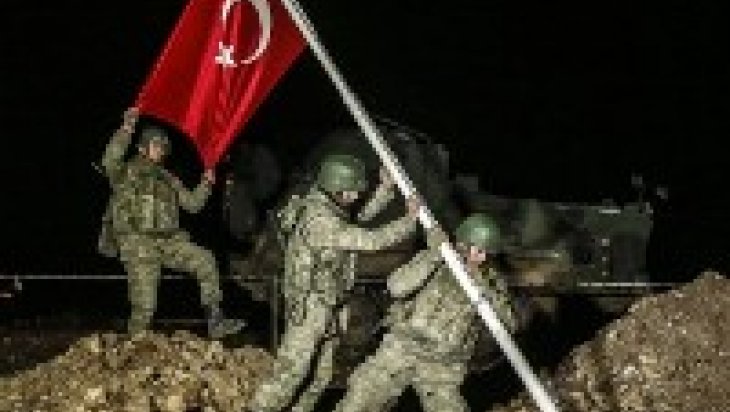 As a result of the operation launched by Turkish Armed Forces, Turkish soldiers deployed in Tomb of Suleyman Shah, the only land belongs to Turkey outside its boundaries, were evacuated and relics in the Tomb were brought to Turkey. Correspondingly, the same size land close to Turkish-Syrian border was taken under control by Turkish Armed Forces and surrounded with barbed wire and Turkish flag was raised. The area near to Syrian Esme village will be new location of the Suleyman Shah Tomb until it is moved to a permanent place.

At first glance and according to pronouncements, the reason of the Shah Euphrates Operation is increasing threats against the Tomb in Karakozak village, Aleppo. Before that, evacuation of the Tomb was on the agenda due to intensification of conflicts in Karakozak village. Moreover, in March 2014, ISIS threatened to destroy the Tomb unless the Turkish flag was hauled down. Turkey replied by stating that Suleyman Shah Tomb was considered within the scope of any piece of Turkish land and any kind of attack would be responded likewise. Since then, it was known that there were efforts to evacuate the Tomb and the soldiers. The first reason why evacuation took place in this period might be the increasing security risk. In this respect, a few factors were influential. First of all, three days before the evacuation, agreement to “train and equip” Syrian opposition forces was signed by Turkey and the US. It was announced that opposition forces, which will be trained and equipped, will battle against both ISIS and Assad regime. This increased the risk of ISIS’s attack against Turkish targets. Second reason is that ISIS was defeated in Ayn-Al Arab (Kobane) with assistance of Turkey. This defeat in the beginning of February might cause ISIS to target Turkey. The third factor is YPG’s, Kurdish militias, effort to move forward around Kobane against ISIS. In this situation, the conflict between ISIS-YPG gets closer to Suleyman Shah Tomb. This increased the security risk.

ISIS’s attack against Suleyman Shah Tomb carried potential to make Turkey a direct part of the Syrian civil war. A short time ago, ISIS burned Jordanian pilot in Syria and executed 21 Egyptian Coptics in Libya. After these incidents Egypt and Jordan launched air strikes against ISIS. Similar crisis as a result of the Tomb’s not getting evacuated was going to cause Turkey’s military response. Unlike the countries away from ISIS threat, this may lead developments which will affect Turkey’s internal security. Moreover, if Turkish soldiers had been caught by ISIS, as in the case of Consulate Mosul, this would have ended up with putting Turkish foreign policy in pledge. For all these reasons, it became a necessity to evacuate the Tomb and carry it to another area. It would be more accurate to explain why any battle didn’t happen during the operation by attributing Turkey’s deterrent force rather than cooperation with local forces.

Right along with the attack risk, the Tomb’s being situated 35 km away from the border creates problems regarding change of soldiers, logistic support and, if necessary, military intervention. Therefore, it was brought on the agenda to carry the Tomb to a safe area closer to border. Herein, the question of why Esme village was chosen comes to mind. First reason is that attack risk is at its lowest level since the village is located at the border. Additionally, limits constraining logistic support and military interventions will be eliminated. There isn’t much settlement and population around the new area of the Tomb. It is located in somewhere between Cerablus, controlled by ISIS and Ayn- Al Arab (Kobane), controlled by YPG. It is not possible to travel between Cerablus and Esme through road transportation. Therefore, possibility of ISIS threat against the area is limited.

In the grand scheme of things, transfer of the Suleyman Shah Tomb to Esme may hay different meanings and results. In addition to the security assessments mentioned for preference of Esme village as the new area of the Tomb, in middle and long term, it can be considered that Turkey’s new perspective regarding border policy had an impact on it. Within this framework, Shah Euphrates Operation should be evaluated together with train and equip agreement signed between Turkey and the US.

ISIS’s control begins with Cerablus settlement, on the west of the area where Euphrates River enters to Syria. Esme village is located east of Euphrates River and it is close to Cerablus. Border line on the west of the Euphrates River and starting from Cerablus to Azaz -across Kilis- is known as Turkmen region. Settlements on this border line do not completely consist of Turkmen population but, either majority or a considerable rate of the population is composed of Turkmens. When we look at the details of the train and equip agreement, Turkey will train Syrians consisting of Syrian Turkmens within the agreement. If there is a connection between Shah Euphrates Operation and train and equip agreement, it can be foreseen that from now on Turkey will focus on border security issue more. Turkey might be considering having friendly groups in the region between Esme and Azaz controlled by ISIS to protect their own region and creating a safe area de facto.

Turkey’s provision to join military fighting against ISIS regarding non-fly and security zone was not accepted until now by allies. However, boundary line’s being taken under control by Syrian opposition forces, which will be trained within train and equip, may allow it to establish a de facto safe zone. If this assessment is correct, it is possible to say Turkey has drawn the line for eastern border of the safe zone by carrying the Tomb to Esme.