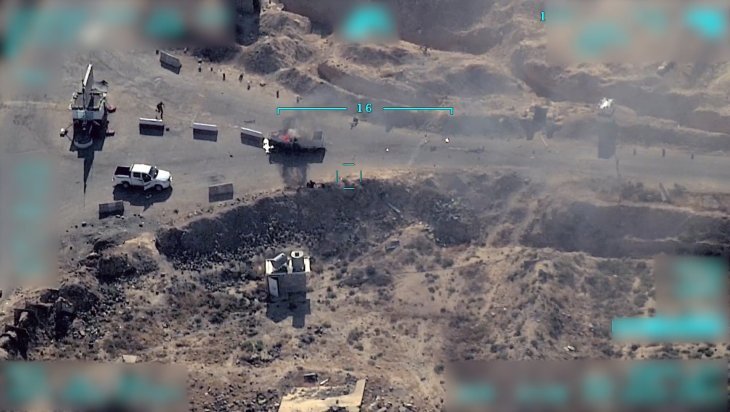 Backed into a corner by recent Turkish operations in the north of Iraq, the terrorist group PKK has resorted to mobilizing its local affiliates in Iraq with a new strategy. In this context, the developments in Sinjar, the easternmost district of Mosul that is situated along Iraq's border with Syria, draw attention.

Recently, the group known as YBŞ (Yekîneyên Berxwedana Shingal - Sinjar Resistance Units), which has a majority of Iraqi Yazidi militants and is known to be affiliated with the PKK, has used Turkey's operations in the north of Iraq as an excuse, and announced that all government departments except schools and hospitals affiliated with  the Iraqi central government are to be shut down. In fact, a Turkish operation by armed UAVs on December 7 killed Merwan Bedel Haji, code-named Dijvar, who was known to be the co-chairman of the "Sinjar Autonomous Administration Executive Council" established by the PKK in Sinjar and one of the senior members of the YBŞ. Thereupon, PKK-backed demonstrations were held in Sinjar, and on  December 12, clashes took place between the Iraqi security forces and the YBŞ in the Sinjar region. Although the clashes were halted "for now", developments related to the PYD-YPG-SDF, the Syrian extension of the terrorist organization PKK, as well as Turkey's operations in northern Iraq, may trigger new developments around Sinjar.

What happened before in Sinjar?
As a result of the agreement between the Kurdish forces and the US, Sinjar, which is one of the places where Yezidis live in Iraq, came under the control of the Iraqi Kurdish Regional Government (KRG) as a result of the US invasion in 2003. Then, it was included in the scope of Article 140 of the Iraqi Constitution, which was enacted in 2005, and thereby became one of the disputed regions, which are officially subordinate to the Iraqi central government but controlled militarily and administratively by the KRG. In this sense, although it is officially affiliated with the Iraqi central government, the de facto control passed to the KRG with the settlement of the peshmerga in Sinjar, and it became an area where the KDP, led by Massoud Barzani, became active. However, after ISIS captured Mosul in June 2014 and headed towards Sinjar in August 2014, the peshmerga withdrew from Sinjar, and then ISIS took control of the city as well. After ISIS initiated massacres against Yazidis in Sinjar, YPG-YPJ militants of the PYD, the PKK's Syria branch, together with the terrorist organization’s PKK-affiliated militants in Qandil and Makhmur, were deployed to Sinjar under the pretext of "saving the Yazidis". In this sense, the security vacuum created by ISIS was used by another terrorist organization. While the KDP opened a corridor for the terrorist PKK militants who went from Qandil and Makhmur to Sinjar, the PYD opened a corridor from Qamishli, which it controlled in Syria, and helped the Yazidis fleeing from Sinjar to cross into Syria.

Therefore, the PKK became the main actor in the Sinjar region and settled on Mount Sinjar. In this region, the PKK acquired a control zone ranging from the north of Sinjar to the Turkish-Syrian border and established the armed organization YBŞ/YBJ, composed of Yezidis who fled from Sinjar. This  provided a direct corridor that linked the PYD/YPG, the PKK’s Syria branch, and Qandil, the center of the terrorist organization PKK. In addition, due to the administrative vacuum in Sinjar, the PKK made an attempt to establish an autonomous administration in Sinjar under the name "Sinjar Construction Council". On the other hand, the KDP-affiliated peshmerga also participated in the operation to clear ISIS from Sinjar with the support of the US, and the KDP also gained control over the areas it seized. Therefore, a two-headed structure emerged in Sinjar district, one under the control of the PKK and the other under the control of the KDP.

A balance-changer dynamic: Hashd al-Shaabi – YBŞ cooperation
Although Sinjar was retaken from ISIS, the villages around Sinjar were still not recovered. At that  point, in October 2017, joint operations by the Iraqi central government and Shiite militia groups, the Hashd al-Shaabi and YBŞ re-established control over the surrounding towns and villages of Sinjar. After the Hashd al-Shaabi's operations, the Iraqi central government appointed new officials to the administrative units in Sinjar, and the Sinjar District Governor, who is affiliated with the KDP, was barred from entering the district by the local administration established by the YBŞ. In addition, the Iraqi central government arranged monthly wages for  the armed militants of the YBŞ thereby providing a legal and legitimate protection shield through the Hashd al-Shaabi, which was made the official security force of Iraq by law in 2016. This situation strengthened the hand of the YBŞ and therefore the PKK. As a matter of fact, it was noteworthy that the Iran-backed Shiite militia groups within the Hashd al-Shaabi voiced the loudest reactions against Turkey's operations against the PKK and YBŞ in northern Iraq. In fact, it is a major challenge against the Iraqi government that some militia groups act outside the official hierarchy of the Hash al-Shaabi.

The attitude of the Iraqi central government
The government of Iraq was forced to move against the PKK due to several factors, such as Turkey's resolute operations against the PKK in northern Iraq, as well as its diplomatic and political pressure, and the PKK’s efforts to expand its influence in cities such as Sinjar, Sulaymaniyah, Arbil, Kirkuk, and Mosul. As the Mosul Provincial Assembly demanded that the PKK leave Sinjar with its decision on March 11, 2018, the Iraqi central government sent a message to the PKK, asking them to hand over their control areas in Sinjar to the Iraqi security forces. James Mattis, the then US Secretary of Defense, also made a statement on  March 28, 2018, expressing that the PKK's presence in Sinjar poses a threat to Turkey and that they want to see the PKK withdraw from the region. Consequently, on  March 23, 2018, news about the PKK’s withdrawal from Sinjar started circulating in the media, yet the PKK did not withdraw from Sinjar in any way, and even started to view the Sinjar Mountain as a "Second Qandil". The political, social, and security environment in Iraq also allowed the PKK to act comfortably. As a matter of fact, when the former Iraqi prime minister resigned as a result of the protest demonstrations that started in Iraq in October 2019, Iraq remained unable to take a clear attitude toward the PKK. However, as Mustafa al-Kadhimi formed a temporary government in May 2020 that will lead the country to early elections and spend efforts to ensure the balance and dominance of the government in  Iraqi domestic and foreign policy, an agreement was signed in October 2020 between the central government and the KRG to normalize the situation in Sinjar and to remove “foreign forces” from Sinjar with the support of the United Nations Assistance Mission in Iraq (UNAMI). With this agreement, an important step has been taken in ending the PKK's presence in Sinjar.

Sinjar Agreement and Afterwards
Even though the agreement provides a roadmap on the Sinjar issue, no concrete steps have been taken to remove the PKK from Sinjar. Although the Iraqi central government deployed army and police units to the region of Sinjar, it seems that  control of the Sinjar city center has not been transferred to the Iraqi central government. As a matter of fact, this is one of the reasons for the clashes between the Iraqi Army and YBŞ forces. As Turkey's pressure and operations continue, pro-PKK groups in Sinjar are reacting to Iraqi security forces stationed outside the city. From this point of view, the Baghdad administration is in a serious dilemma. The tense and uncertain environment created by the much-debated election results after October 10, 2021, in Iraq also strengthens the PKK's hand. Even though the agreement is important for Turkey, concrete steps  need to be taken against the terrorist organization PKK by Iraq. It is obvious that Turkey will continue its operations against terrorism in northern Iraq as long as Iraq cannot prevent the PKK's activities. At this point, the Iraqi government should prevent the PKK's extension in Iraq, not only militarily but also politically. Otherwise, it is very difficult to establish a stable environment.

This opinion was published on the Milliyet website on  December 17, 2021, with the title "Terör Örgütünden Sincar Hamlesi (Sinjar Move by the Terrorist Organization)".