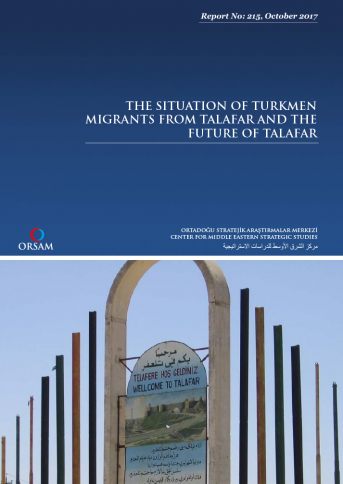 Talafar has been one of the most affected regions by the actions of ISIS since the terrorist organization started to gain control over Iraqi territory in June 2014. Among the most significant settlements inhabited by Turkmens in Iraq, Talafar is known as the largest county in Iraq. It is well known that while the Turkmen constituted a large part of the population in Talafar, a county of Mosul the population of which is approximately 510 thousands, the Kurdish and Arab population lived in the surrounding villages and communes in the pre-ISIS period. However, almost all of these people have become immigrants after ISIS entered Talafar, especially the Turkmen population in Talafar has suffered a great damage.

Turkmens from Talafar, who found themselves in immigration status, could not mobilize in a single region and dispersed into different provinces in Iraq. Besides, more than 70 thousand Turkmens had to migrate to Turkey. While most of the Shiite Turkmen living in Talafar settled in different provinces, mainly in Najaf, Karbala and Babylon in the south of Iraq, some of the Sunni Turkmens settled in Kirkuk as well as Dohuk and Erbil, which are parts of the Kurdistan Regional Government (KRG). Moreover, a camp was established in Kirkuk for the Turkmens from Talafar with the support of Turkey.

The ISIS control in Talafar, which started in June 2014, was completely terminated by the Iraqi security forces’ operation that started on August 20, 2017 and lasted for 11 days, and Talafar was liberated from ISIS. In the wake of this process, the efforts will be made for the reconstruction of Talafar and the return of the migrants. At this point, with the aim of providing a perspective for the future, ORSAM has examined the situation of the Turkmen asylum seekers and prepared this report in line with ORSAM field studies. The report examines several titles such as the reasons for the Turkmen migration; the reason why they preferred to emigrate to Turkey; possibilities of reconciliation, peace, cooperation and conflict between Shia and Sunni Turkmens in case of their return; the Turkmen expectation and requests regarding the administrative and political future of Talafar; examination of the dynamics of perception and radicalization towards ISIS; and the view of the Talafar Turkmens towards the actors in the region (Turkey, Iran, USA, KRG, Hashdi al-Shaabi, PKK, ISIS, Iraqi Central Government). I hope this report, which has been prepared in the light of the primary sources obtained from the field, brings about a different perspective for those who are interested in the subject, and I hope you enjoy the reading.