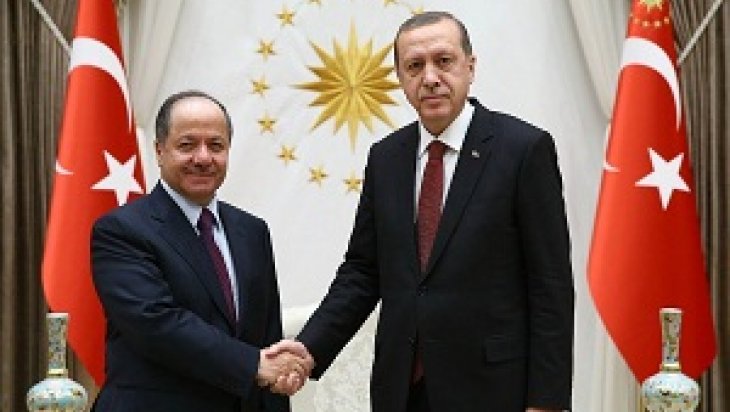 Masoud Barzani, President of Iraqi Kurdistan Regional Government (KRG) visited Turkey on 23 August 2016. Barzani met President Recep Tayyip Erdogan and Prime Minister Binali Yıldırım and also visited the General National Assembly of Turkey. Masoud Barzani has visited Turkey for the first time since December 2015. The timing of Barzani’s visit to Turkey and the developments following the visit clearly showed the intricate situation of the relations between the regional dynamics. US Vice President Joe Biden visited Turkey on the second day of Masoud Barzani’s visit and Turkey launched an operation in Jarabulus belonging to Aleppo Governorate in Syria and under ISIS control only a few hours before Biden’s visit. This shows once again that the regional developments cannot be considered independently from each other.

As expected, in Masoud Barzani’s visit to Turkey, the preeminent issues were the FETO-linked schools in KRG, the fight against ISIS, the Mosul operation and the status quo in Syria as well as the bilateral relations. It is noteworthy that a compromise was reached concerning the FETO-linked schools in KRG within the scope of the visit. As far as it is known, there are more than 20 FETO-linked educational institutions in KRG. KRG previously announced that these institutions would be closed but did not give information about their future. The transfer of these institutions to the “Maarif Vakfı [Education Foundation]” which was officially announced upon publication in the official gazette in June 2016 and was planned to initiate educational activities abroad could be an appropriate step for the nature of these institutions. The compromise about the FETO-linked schools in KRG could positively contribute to the improving relations between Turkey and KRG.

On the other hand, Masoud Barzani stated that “there were upcoming big changes in the region” and then Turkey launched the Jarabulus operation. This was perceived to indicate that there was an exchange of views with Masoud Barzani with respect to the operation. The fight against ISIS in Syria and Iraq has an integrative meaning for Turkey. That is why the fight against ISIS in Iraq and Syria should be considered together. In this sense, Masoud Barzani’s statement on his compromise with Turkey about the fight against ISIS shows that they support the Jarabulus operation. Mosul operation comes to mind at this point. Turkey’s position and role in the Mosul operation will be significant also for the regional influence of KRG and Masoud Barzani. Turkey supports all local forces fighting ISIS in the region within the scope of the coalition against ISIS. It is known that the Peshmerga are trained on the camps in Turkey and Iraq within the context of this support. Besides, they also constitute an important force which will end ISIS’ presence as well as their significance for Turkey’s military presence on Bashiqa camps in Mosul and the training of the forces engaged in the fight against ISIS. It is known that Turkey’s military force in Bashiqa has so far killed almost 470 ISIS members and caused serious damage to the substantial presence of ISIS. That is why Turkey’s presence in the region plays a facilitating and supportive role in the fight against ISIS.

On the other hand, Turkey, KRG and Masoud Barzani should act together for their local power against the common target in order to weaken the presence of PYD/PKK in and around Sinjar as well as the anti-ISIS operation that will be launched at the city center of Mosul. In addition to the fight against ISIS, it is now indispensable to clear the other terrorist organizations from the region for the national security of Turkey and the regional security. At this point, it is known that the terrorist organization PYD/PKK tries to establish an integrative structure in Syria and the north of Iraq, notably in Sinjar. This situation constitutes a primary threat risk to the regional security in the post-ISIS period. In addition to the attacks from northern Iraq to Turkey, the emergence of a structure which will undermine the security in northern Iraq will increase the political instability in Iraq and KRG. At this point, a common fight against not only ISIS but also all the terrorist organizations in the region will be significant to ensure regional security.

Furthermore, it is also important to weaken PYD/PKK so that Masoud Barzani can ensure the Kurdish presence in the region and maintain its power in KRG. It will not be wrong to say that there is a fight between Masoud Barzani and PYD/PKK under the leadership of Abdullah Ocalan concerning the leadership of the Kurdish presence in the Middle East. Therefore, it is possible to mention about a regional conflict between Masoud Barzani and PYD/PKK. This conflict is witnessed not only for the Kurdish population in the region but also for the political rivalry in KRG. PUK and Gorran act together against the activity of Barzani-led KDP in KRG by turning their cooperation into a deal. This politically leaves KDP in a difficult situation in KRG. PUK and Gorran use PYD/PKK to create influence in the local politics as they did over KDP in the general politics and use PYD/PKK against KDP. Since PUK and Gorran cannot be influential over such regions as Erbil and Dohuk where KDP is influential and Sinjar, Zumar, Fishabur close to the Syrian border of Iraq and within KDP’s area of influence even though they are influential in the general politics of KRG. That is why efforts are made to weaken KDP by using the force and influence of PYD/PKK in these regions. At this point, it is noteworthy that, during Barzani’s visit to Turkey, a PUK delegation under the leadership of Mele Bahtiar visited Baghdad and attended meetings on behalf of PUK and KRG.

On the other hand, it is seen that Masoud Barzani also tries to maintain the balance on the regional arena. On the date of Barzani’s visit to Turkey, Head of KDP Foreign Relations Office Hemin Hawrami made a striking statement that Masoud Barzani would also visit Iran.  This statement shows that Masoud Barzani takes into account Iran’s role with respect to the dynamics in KRG. Indeed, a new atmosphere emerges in the Middle East. In this new atmosphere, Turkey tries to recalibrate its foreign policy emphasizing normalization, regional harmony and cooperation dynamics in the. Especially Turkey’s proactive, concrete and solution-oriented steps in the fight against terrorism strengthen its position in the region. Masoud Barzani also tries to take a new position in this new atmosphere in the Middle East and to maintain its advantageous position it gained in the post-2003 period. At this point, it would be valid to argue that it is highly possible that multilateral cooperation dynamics will emerge both for Turkey and KRG in the following period.