What do the Protests in Iraq Point to? 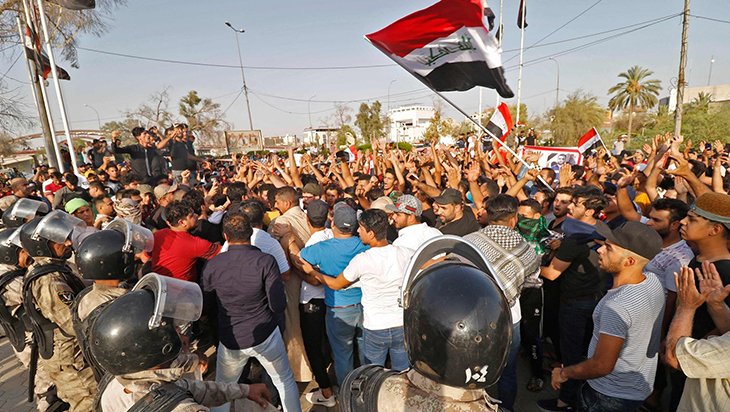 After the political crisis following the objections to the election results, rising due to the allegations of vote rigging in the Iraqi parliamentary elections on 12 May 2018, it appears that the protests rising especially in the south of Iraq have started paving the way for a new crisis in the country. Despite the preliminary election results announced on 15 May, the votes started to be counted again after the decision of the Federal Supreme Court of Iraq and the final election results have not yet been announced. Therefore, the term of office of the Iraqi parliament has ended as of 1 July while the Iraqi government has also remained legally unauthorized. However, the government maintains its duty de facto. On the other hand, while the political bargains continue for the formation of the government, the demonstrations have broken out in Basra in the very south of Iraq, spreading to Baghdad and the protests address both the government and the local administration owing to the problems such as lack of public services, corruption, low level of life standards and unemployment. Although the government and security forces make efforts to suppress the protests, they have not yet been blocked. Five people have so far lost their life and almost 200 people have been wounded in the demonstrations.

The first spark of the protests was Iran’s cutting the power it provided to Basra, Meysan and Zikar, upon which demonstrations arouse in Basra. While power cut negatively affected the already low life standards in Basra and southern provinces of Iraq where the temperature is above 50 degrees, other problems such as unemployment, corruption, lack of public services in the country emerged once again. Upon the incidents, Iraqi Prime Minister Haider al-Abadi went to Basra and tried to calm the people with the short-term solution proposals while the statements of Ayatollah Ali al-Sistani, the highest Shiite religious authority in Iraq, supporting the demonstrations seem to have encouraged the people. Al-Sistani found the public demonstrations rightful in his fatwa on Friday and called the government to take urgent steps in solving the problems. However, the mentioned problems are not new to Iraq. Therefore, it seems possible for neither the existing government or previous governments nor the governments to be formed in the future to solve the mentioned problems by taking urgent steps. It is obvious that long term programs are needed to solve the mentioned problems. At this point, it will be wrong to say that the protests in Iraq are caused only for reasons such as limited public services, corruption or unemployment. It can be said that local, regional an deven global dynamics are effective in the mentioned demonstrations.

Due to the conditions caused by the invasion, it is possible to see that such protests have been witnessed almost every summer in southern Iraq since 2003. Especially in summer, protests are triggered by the problems with electricity and water, for the reasons of lack of infrastructure in Iraq. In this sense, it is seen that the demonstrations are not planned. Even though they spread gradually, they maintain the standards in terms of the number of participation and do not have an expanding/growing nature in this sense. However the pressure of the domestic politics leads to the growth of the protests since it is possible to say that the people are not content with the current political situation in the provinces in southern Iraq. Having regard to the rate of participation in the elections on 12 May, it appears that this rate is 20-25 percent in the provinces in southern Iraq. It is possible to say that this is a reaction of the people to politicians. Indeed, the offices of many political parties have been targeted in the demonstrations. In this sense, it is seen that Iraqi people keep the political parties responsible for current insufficiencies in the country. Despite the support of the militia involved in the politics together with the political parties such as Badr Organization, Asaib Ahlal Haq to the demonstrations, they have become the target. This shows that the confidence in these groups which significantly received public support in the fight against DAESH have been shaken. On the other hand, the mentioned demonstrations cause pressure on the politics and force the political parties to form the new goverment as soon as possible. At this point, it is said in the comments made that some groups provoke the demonstrations to end the recounting process immediately and for the approval of the election results. Comments are made in the Iraqi media, indicating that it is planned to take urgent decisions thanks to the demonstrations and thus, efforts are made to prevent the display of the manipulation in the election process.

On the other hand, the anti-Iran slogans in the demonstrations are also striking. Indeed, it is known that there has been a reaction to Iran among Iraqi people for a while. Especially in the recent period, it has been generally convicted that Iran has turned Iraq into a field of conflict in the showdown with other actors on regional and global level. The meetings attended by Qasem Suleimani, Commander of the Quds Force of Iranian Revolutionary Guards, regarding the government in Baghdad even only two days after the elections received reactions across Iraq. Iran’s cutting the power supplied to the country immediately before the incidents on the ground that Iraq did not pay for its power debts is also of utter importance within this context. In the political environment emerging as of the election results, this move which can be perceived as an effort to fictionalize the country and the new political climate and to show its effects through a vital source of energy like electricity, in response to the failure of actors sympathizing with Iran to come forth on the desired level, has not received any response as expected by Iran and has even transformed into a reaction to Iran. In this sense, it is possible to say that the discourse which is away from sectarianism and supports the Iraqi identity has also been reciprocated in the public especially in the post-DAESH process.

On the other hand, it will not be wrong to say that the policy produced through the regional and global balance is also effective in the demonstrations in Iraq. Even though it is difficult to say that the fight in the regional and global politics directly leads to demonstrations, it is seen that actors such as the USA, Saudi Arabia, the United Arab Emirates and Iran try to gain advantage by manipulating the demonstrations. Especially in the USA-Iran conflict, the increasing pressure of the USA on Iran by means of direct sanctions and the polarization that will strengthen and even implement the US politics in coordination with Saudi Arabia and the United Arab Emirates make its effects felt in the Iraqi politics as well. Indeed, Iran sees Iraq as a life space and room for maneuver to reduce the economic, political and military pressure on itself. Therefore, Saudi Arabia, rival of the USA and Iran in the region, tries to limit the power of Iran to move in Iraq. At this point, the USA promotes the strengthening and improvement of Saudi Arabia-Iraq relations and supports the normalization of the relations between two countries. It is known that Saudi Arabia has been recently trying to increase its investments in Iraq and has been organizing investment expositions and conferences in the south of Iraq, notably in Basra. Indeed, after Iran cut off the electricity it provided to Iraq, there was outstanding news stating that Iraqi Electricity Minister Qasim al-Fahdawi and the Minister of Planning Salman al-Jumaili would go to Saudi Arabia to reach a deal for receicing electricity from Saudi Arabia.

At this point, it will be important to determine what kind of composition the government to be newly formed will have in Iraq. Whereas the statements of Muqtada al-Sadr, seen as the winner of elections, indicating that the future government will follow an equal and balanced policy with all neighboring countries are seen as a message to Iran, Muqtada al-Sadr’s visit to Saudi Arabia before the elections can be considered to sign that the new Iraqi government will follow a policy to dress a balance in the region in the following process. At this point, the response of Haider al-Abadi, who has been at prime minister’s office since 2014, has tried to draw a balanced line between the domestic and foreign policies despite the fight against DAESH and is also among the candidates for prime minister’s office for the new period, to suppress the latest protests and meet the demands of people will determine the future and course of the Iraqi government and politics.