Where is al-Abadi Government in Iraq Headed? 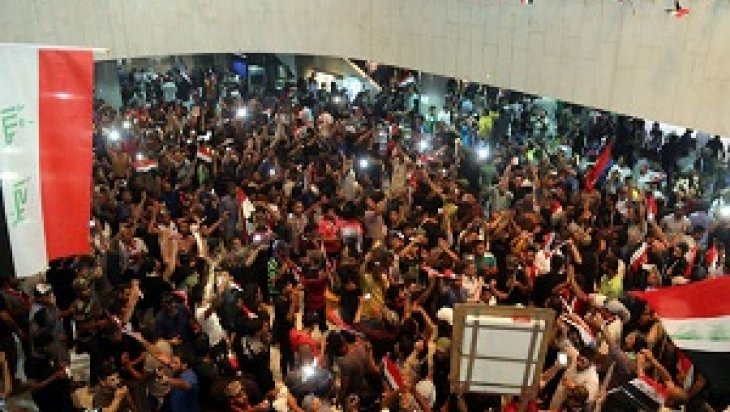 The ongoing government crisis and demonstrations in Iraq since August 2015 have come to a new phase together with what was gone through on 30 April 2016, Saturday. The demonstrations demanding the government to make reformsstarted with the call of Muqtada al-Sadr and have continued for almost 2 months. On Saturday, the demonstrators entered the “Green Zone” where there are Iraqi state buildings, embassies and critical buildings like the houses of the authorities. Dispensation is required to enter this zone and it is a high security area. The demonstrators entering the Green Zone also intruded in the Iraqi Parliament and attempted to enter the Prime Minister’s Office. The demonstrators who stayed in the “Green Zone” for a couple of hours leaved the zone after the short-term intervention of Iraqi security forces. Whereas this clearly shows the weakness of the Iraqi government, a much bigger chaos was forestalled easily and nonviolently in Iraq where there is a serious security vacuum. These demonstrations have a political basis since they demand the government to make reforms. However, it is possible to say that the interwoven structure of the balance between security and the politics in Iraq, the variety of political and military actors and fight against ISIS could have more effects than the political consequences.

At this point, it will be better to analyze the details of the process about the government crisis before the analysis of consequences of the crisis witnessed.Indeed, the critics against the government have continued incessantly since the formation of the government byIraqi Prime Minister Haider al-Abadi in August 2014.He especially faced the pressure of Nouri al-Maliki who wanted to be the prime minister for the third time. Furthermore,poverty and economic problems continued in the country and better public services could not be brought even though it had been one year since al-Abadi formed the government. This caused pressure on the government. On the other hand, not much progress was achieved in the fight against ISIS, the government had difficulties in keeping the militia under control and such countries as the USA, Russia and Iran caused pressure. All these increased the constraints on the government. Therefore, the highest religious authority in Iraq, Ayatollah Ali al-Sistani announced that al-Abadi government would make reforms as of August 2015. However, al-Abadi could not make reforms due to the fight against ISIS, the problems between Erbil and Baghdad and the economic problems.In this process, Muqtada al-Sadr alleged that the government had no other choice, he increased his pressure for reforms and called his partisans to make pacifist protest demonstrations.After the protests for almost 2 months, al-Abadi remained loyal to the call of Muqtada al-Sadr and reduced the cabinet members from 22 to 16 people. He presented his list of candidates to the Iraqi Parliament on 31 March, but almost none of the groups in the parliament adopted the list of al-Abadi on the grounds that no one consulted them. After the refusal of the first list, al-Abadi, who wanted to have the control and manage the process, prepared a new list by demanding names from the political groups. However, Muqtada al-Sadr said that the government should get rid of partisanship and continued demonstrations. Although the demonstrations continued and the parliament was divided, al-Abadi made the parliament vote for 5 ministers on the second list that he prepared with a limited number of deputies. While the rest of the list was supposed to be approved on 30 April 2016, the parliament meeting was cancelled since al-Abadi could not reach the sufficient number in the parliament. Then, the demonstrators entered first in the “Green Zone” and then Iraqi Parliament and started civil disobedience action. However, the activists retreated from the “Green Zone” in a short time.

Although the easy intrusion of the demonstrators into the Iraqi Parliamentclearly displayed the chaos in Iraq and the weakness of the government, the bloodless end of the events in a short time can be considered as a sign that al-Abadi managed the process well. Indeed, it could cause unrest among the demonstrators and lead both Baghdad and Iraq to a process of irreversible conflicts if the security forces resort to coercive measures against the demonstrators. Therefore, it seems that Iraq was freed from a bigger chaos since the demonstrators retreated after the warnings. Nevertheless, the political crisis in the country is not over. It would be right to say that there is a serious separation between the Shiite groups in Iraq. Considering that Iraqi government has not already been built on a strong foundation, it will not be possible that this crisis will be over in the short run. Almost all the political groups in Iraq try to strengthen their own political positions instead of running the country. For example, Nouri al-Maliki was the Prime Minister twice before al-Abadi formed the government and also tried hard to stay for the third term, but he had to give up because of the pressure. However, Nouri al-Maliki did not cut himself off from the politics. He created pressure on the government and made efforts to regain his strength with the support of the militia close to him such as Asa’ib Ahl al-Haq, Kata’ib Hezbollah, Badr Organization. The Islamic Supreme Council of Iraq (SCIRI) led by Ammar al-Hakim followed a more reconciliatory line and a balance policy and tried to benefit from the conflict between the other parties without taking risks. The leader of Badr Organization which has both armed and political structure, Hadi al-Amiri plays an active role in order to be the executive power of Iraq through al-Hashd al-Shaabi which became the main actor in the fight against ISIS in Iraq. It is possible to say that Hadi al-Amiri who holds the Ministry of Interior has more influence over al-Hashd al-Shaabi than Haider al-Abadi.The Shiite in Iraq sees al-Hashd al-Shaabi as a savior rather than Iraqi security forces. This causes al-Abadi to lose power in the eyes of the Shiite.

On the other hand, al-Hashd al-Shaabi gained power so this ensures space to Iran with which al-Abadi could not establish such a good dialogue as Nouri al-Maliki did. As is known, Iran explicitly supports al-Hashd al-Shaabi in Iraq. Even though there is rapprochement between Iran and the USA after the nuclear treaty, USA does not want to lose power against Iran in Iraq considering the current situation. That is why it would be better to say that al-Abadi constitutes critical importance to the USA. Therefore, the US Vice-president Joe Biden visited Iraq in order to talk about “the insurance of national integrity and the fight against ISIS” after 5 ministers were approved on the second list that al-Abadi presented to Iraqi Parliament. This reveals that the USA supports al-Abadi. Furthermore, it can be said that the USA will not let al-Abadi become a very powerful prime minister as in the term of Maliki. Since Maliki tried to form an individual government in the country with the power he gained with the support of the USA and then he led the country to a chaos. Therefore, a participative government and a weak leader became acceptable for everyone.As of the current situation, a weak leader serves the purposes of all the parties. All the strata of society take an efficient position in the process while there is possibility to move in the international arena.

However, a powerless prime minister and government allow each group in Iraq to intensify their area of influence and power in their geography. That is why no segment wants a powerful government while all parties criticize the government. This will trigger the separation as it may intensify the chaos in Iraq. For instance, it seems possible that Kurdistan Regional Government (KRG) which runs after “independence” will sever the ties more with Iraq. The chaos and separation in Iraq will allow KRG to demand more support from the world public opinion and strengthen its thesis that “look, it is not possible to live in Iraq”.

It would be right to say that the Sunni face the biggest problem at this point. The Sunni have not yet been able to adopt the integrative movement in Iraq. Considering that ISIS is still dominant in the regions where the Sunni population is high, there are more political and security threats against the Sunni in Iraq. While Kurds protect their own regions with the support of international powers, it is seen that the Shite ensure the protection due to the militia and the security forces in Iraq. While Turkmen are now almost ignored in Iraq and let alone in the political issues, it is hard to say that there is an important development in the protection of Turkmen.

From this viewpoint, it would be better to say that the main factor that will shape the political environment will be alliances and separations between the Shiite. It seems that the name list of the second technocrat government that al-Abadi formed will continue to be adopted in the current situation. However, it is said that the opposition of al-Abadi, especially Nouri al-Maliki and Hadi al-Amiri prepare an alternative coalition. It is also said out loud that these people and groups will form an “insurgent government” through al-Hashd al-Shaabi. The militia called al-Khorasani entered Baghdad with a large convoy in order to protect this city after the demonstrators entered Iraqi Parliament. Other militia groups also reinforced it and showed up in the streets of Baghdad, which should be underlined. Indeed, it is noteworthy that al-Abadi took the authority of the protection of Baghdad from the Baghdad Operational Command and gave it to the Joint Special Operations Command in which the USA had been engaged one month earlier.At this point, it can be said that the USA will not let such an attempt of a coup d’état. Moreover, early election scenarios are also mentioned on the agenda in Iraq. However, the economic crisis, ISIS control and current security vacuum in the country will not ensure healthy elections in Iraq. Therefore, the situation is still seen to be in favor of al-Abadi considering that the USA still supports him after all. The most probable scenario is that al-Abadi will stay as prime minister at least until the following elections in 2018.