2018 Iraqi Parliamentary Elections and the Future of the Political Regime 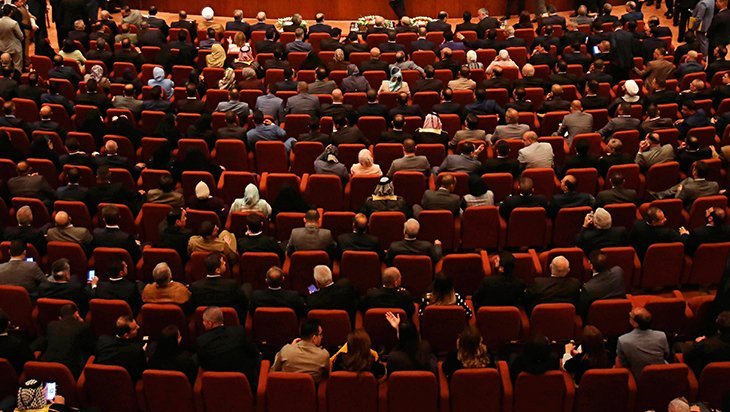 Since the establishment of the Iraqi state in 1921, political life in Iraq has gone through many stages and experienced different governance regimes. Each of these political regimes has a fundamental characteristic:

The Iraqi political forces, especially the opposition operating outside Iraq before the invasion, made an agreement with the US. The Iraqi political regime, which was established by a large number of power centers and poor governance after the occupation, was largely characterized by a democracy focused on sectarian and national divisions as a means of superiority like the system in Lebanon. In Iraq formed in this way, both the deterioration of the political situation and the security problems and the economic hardship as well as the emergence of financial and administrative corruption led the Iraqis to abandon their hopes of establishing a stable political regime that would pave the way for a successful state. The deterioration in security brought about political stagnation and a nationwide failure.

One of the most dangerous consequences of the Iraqi political regime after 2003 is the rapid decline of the Nations of Iraq Project. For the political process is based on sects. The Shiite leaders and their representatives acted in a kind of mentality that thought they had been subjected to harsh opposition and persecution. The Sunni leaders were unable to comprehend the enormous change in Iraq as they did not question the state administration and acted with an authoritarian mentality. Kurdish leaders, on the other hand, used the “demand and take” method to realize the goal of founding a Kurdish state. Furthermore, taking advantage of the interests between the political figures became widespread and sectarian interests outweighed the interests of the country.

2018 Iraq Parliamentary Elections
The Iraqi parliamentary elections were held on 12 May 2018, despite many inconveniences, such as confusion in the work of the Independent Electoral Commission, objections to the working method of this commission and accusations of fraud. However, in this article, we will touch upon positive changes.

In this context, large sectarian pillars were destroyed. The Shiites, for example, gathered in the National Coalition and were divided into five basic lists (Sairun, Nasr, Fateh, State of Law, Hikma). Besides, real national coalitions emerged. For, just like al-Abadi provided a coalition between the Sunni forces and Victory, Muqtada al-Sadr also created a coalition with civilian powers, the bloc of communists, new faces and others. The deputies, who caused political, social and even security-related tensions, constituted a problem in the political process due to their bad performances and harsh speeches, failed.

An indicator of the major interruption of the political process is the fact that most Iraqis did not participate in the elections. The neutral sources observed that the actual participation rate in the elections did not exceed 20 percent. Some question how these interruptions turn into a positive situation. For sectarian polarization in Iraq made the elections subject to groups and their pursuit such as a system of submissiveness, fearing that the voices of rival groups would be pretty effective. This situation will push the conscious follower into despair because it is not expected that a group or a sect of Iraqis would abandon their group in favor of Iraq. This is an obvious and clear sign that voters have changed their attitude. Many Iraqis did not vote by boycotting elections, and silence can sometimes create a tremendous impression. If the boycott becomes ever more evident, the Iraqi people can be an oppressive, supervising and active actor in the functioning of the new government, which could save the political process in Iraq, or continue its current political process as a new state.

The election resulted in a way that the Sairun Coalition became the winner with a small margin. This victory signifies a crucial conclusion that the political forces established within Iraq since 2003 outperformed the outside-backed Iraqi opposition forces. It is noteworthy that Nineveh province recently liberated from the ISIS control, took the lead in Iraqi participation rates and Khalid al-Ubaidi (the defense minister dismissed after the motion of censure in the previous parliament) was the first in Mosul with the Victory Coalition led by Prime Minister Haider al-Abadi. This is also a question mark in minds on how a minister removed from office can obtain this national duty. Although al-Obaidi was removed from office, many of his supporters concluded that the charges against him were unconvincing. This deposal struck the credibility of the previous parliament and this coup strengthened al Obaidi's victory.

The Role of the US and Iran in the Iraqi Political Stage
At the center of the mutual accusations between the Iraqi political forces is to accuse each other - especially the neighboring states of Iraq and the US - of being associated with external forces. However, the main external role that provokes the Iraqi political process belongs to the US and Iran. For the geopolitical weight of states, especially like Turkey and the United Arab Emirates, have not played such a clear role. The US, which overthrew the old Iraqi regime, controlled the political process and identified the basic rules based on the constitution, merits, and privileges. The Iranians, on the other hand, benefited from the fall of the Baath regime, a historical rival and enemy, and the Iraqi opposition, which they both support and embrace, came to power. Thus, a political regime, which is an ally of Iran, took over the power in Iraq.

After 2003, the political regime in Iraq was linked to the US. From a superficial point of view, it is understood that the US wanted to make Iraq an example of democracy in the region. And the observers note that the White House diplomats were indifferent to the Iraq file, or that the Iraq file was linked to the US president's tendencies. Furthermore, there are some who think that the decision-making US is incapable of increasing the Iranian influence in Iraq. Nevertheless, there is another point of view, and it is as follows: The person who wants to know the US's strategic aspects of Iraq should realize that the US is interested not only in Iraq but also in the whole region and then it influences the politics of this country. The United States acts in accordance with the functional role of Iran before an agreement is reached. Iran's expectations and initiatives in the region have been in line with the demands of the decision-making US. In the region, the military presence of the US maintains its superiority and this makes the countries (especially the Gulf countries) dependent on the US.

The increase in the US military headquarters and bases in the region has been one of the consequences of Iran's expansionist policies. Furthermore, most of the Arab countries consider the Iranian threat to be more serious than the Israeli threat and explain the US's indulgence in the role of Iran or another Arab state in Iraq. Political decision-makers in Iran continue to pursue their policies towards Iraq and the region as part of their expansionist projects - no matter whether they realize the US policies or not. They see the Iraqi political regime as an ally to protect their own interests and always try to make the Iraqi prime minister get closer to them. Despite their influence in Iraq, the United States and Iran cannot fully control the political game. If Iraqis want to establish a real and realistic political regime, no external groups will be able to prevent them.

The Course of the Political Regime in Iraq
The actors involved in the political process in Iraq are divided into armed alliances and parties. Other forces and parties have no power in the region. However, the victory of the Sairun coalition could be a way out for the political process, as it would be very difficult to exclude this coalition from forming the government. For the leader of the coalition, Iraqi cleric Muqtada al-Sadr, has a wide public support in Baghdad and southern Iraq, and he commands an armed wing, Saraya al-Salam (formerly known as Mahdi Army), which is influential in Samarra and its surrounding areas. It seems that the fact that Muqtada al-Sadr is essentially outside the scope of the US and Iranian influence does not mean that it would be easy to by-pass the Fateh Coalition, which represents a popular mobilization. The political order in Iraq has changed. After providing an alliance with those who share the same view with it, the Sairun Coalition can form a new government, in particular, create traditional anti-parliamentary parties and other political parties, and provide an alliance that excludes forces associated with external agendas by making the country safe. This presents a historic opportunity for the creation of a real party in Iraq that will establish a stable political order. If the government establishes two parliamentary blocks, one of which represents the opposition, the habits that have been continuing since 2003 in the Iraqi political scene are broken.

All political forces participate in the government according to their election weight and take into account the sectarian divisions of the Iraqi people. Considering two major blocks, namely the Reform and Building Block which consists of Sairun, Victory, Hikma, Wataniya and other forces, and the Building Block[ii] which consists of Fateh, the State of Law, and the other lists, the establishment of two big and real parties from the prominent government and opposition groups is quite likely. Particularly after the division of the Kurdish political forces in the wake of the 2017 independence referendum and the entrance of the federal forces into Kirkuk and the controversial regions, competition and performance became stable, the political congestion ended and the sectarian tensions decreased.

The 2018 elections are regarded as a historical experience for politicians supporting Sairun and Wataniya. Internal forces claimed that their decision-making power was not in their hands, they could not change the current situation and were unable to combat negative developments. If palliative solutions are produced in the change of ministers or in the fight against corruption, alliances based on sects and external directions will come again and the Shiites will gather to elect a prime minister. The Sunnis participating in the Shiite lists will withdraw and come together with the Sunnis to form a single block, which will lead Kurds to form a single block. In this way, those who adopt views behind open or closed doors will be clearly separated from each other by sectarian alliances.

If this scenario takes place, the political regime will collapse and the 2018 elections will go down in history as the last elections in Iraq. For the indicators are such that the Iraqi people are tired of the political chaos especially in the south of Iraq. Explosions have started in the Basra province due to the insufficiency of services and mainly the desertification resulted from the scarcity of water resources in an environment that is dependent on agriculture and animal husbandry. Besides, because of Fatah's armed power in the country (popular mobilization), there is the possibility of armed conflict between Sairun and Fatah. If this happens, the Iraqi political regime will begin to totally collapse and Iraq will easily break down. Iraq's collapse and separation into three states will not be in favor of Iraq and Iraqi neighboring states the social structure of which largely resemble Iraq.