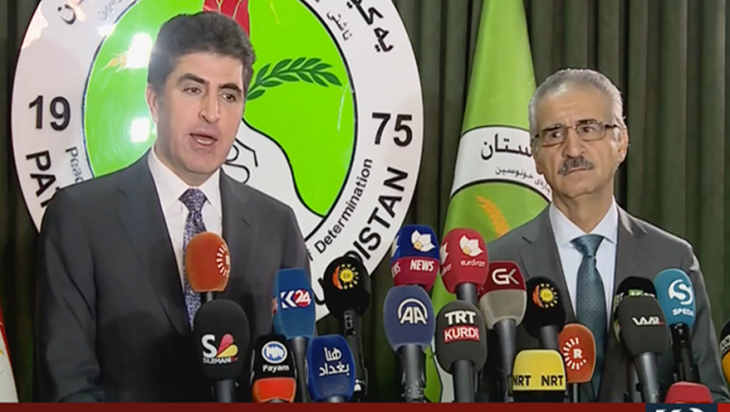 The domestic politics of Kurdish Regional Government (KRG) literally witnesses a chaos in the referendum process. It is seen that a new political process has started in KRG with the effects of the developments taking place since the controversial “independence” referendum held under the leadership of Barzani-led KDP on 25 September 2017. The party of Jalal Talabani who had undergone a severe disease since 2012 and returned to KRG in 2017 after a long-lasting treatment but lost his life in October 2017, PUK took a step in the post-referendum process, which moved mountains in KRG. Upon partial withdrawal of PUK Peshmerga as a consequence of the deal between Iraqi central government and PUK, KRG had to withdraw from all the regions it seized after 2014 as a result of a Kirkuk-based operation on 16 October 2017. This put KRG, which was already subject to severe external pressure and sanctions due to the referendum, in a difficult situation in its domestic politics. Indeed, the demonstrations breaking out in Sulaymaniyah in order to protest against the financial difficulties, with the political instability in KRG, led to serious repercussions. While people were killed and wounded because of the intervention of security forces in KRG as the demonstrations spread, a large number of people were also detained. The detention of Journalist Shahsuwar Abdulwahid who is the owner of NRT TV channel which opposed KRG administration the most with certain activists and the president of “New Generation Movement” that has led “no” campaigns in the referendum process and has later transformed from a civilian movement to a political structure has caused indignation among demonstrators and the demonstrations grew in size. KRG administration released a large part of the detainees, including Shahswar Abdulwahid, in order to suppress the demonstrations. Iraqi central government also made a statement, indicating that government officials’ salaries would be paid in KRG and that the government would have to intervene if demonstrations continued and Erbil gave reconciliatory messages to Baghdad. After these statements, it seems that demonstrations have come to a halt. However, this process is seen to change the balances in KRG.

Indeed, a KDP delegation led by KRG Prime Minister Nachirwan Barzani visited PUK in Sulaymaniyah on 7 January 2018 and held a joint press conference with PUK Politburo member and spokesperson Mulla Bakhtiar. In his statement, Nachirwan Barzani said that “PUK and KDP fulfilled their responsibility of strategic alliance on that day and all the political parties in Kurdistan should overcome the problems in unity” and gave the signal that the cooperation between KDP and PUK would be initiated again. Nachirwan Barzani’s emphasis on “strategic alliance” could be described as the signs of an about-turn for KDP and PUK. These two parties signed a “strategic deal” in 2004 and decided to jointly perform the administration of KRG and run for the elections with a joint list. Accordingly, it was foreseen that KRG Prime Ministry would pass hands between KDP and PUK in two years. However, no PUK politician could serve as Prime Minister in any process, except for 2009-2012 (Barham Salih) term. When KDP and PUK ran for the elections in separate lists in 2013, KDP made a deal with Gorran movement first while forming the government, thus collapsing the strategic alliance between KDP and PUK. KDP and PUK also ran for the general elections in separate lists in 2014. KDP and PUK further separated following this process and PUK and Gorran even signed a new deal of strategic alliance in May 2016. Indeed, the last breakaway point between KDP and PUK was the operation of Iraqi central government in Kirkuk and disputed regions as a result of the deal between Iraqi central government and PUK. While KDP accused PUK of treason, PUK blamed Barzani for pushing KRG into this process.

However, the developments taking place inside and outside KRG seem to force KDP and PUK to cooperate again. With the referendum pressure on KDP, it is trapped by the financial problems in KRG. As of the current situation, KDP does not allow the outbreak of demonstrations in the regions under its control (Erbil, Dohuk) but social unrest is felt seriously in these regions. More clearly, it is said that KDP grassroots in Erbil and Dohuk will not remain silent for a long time. There have been ongoing problems with the payment of government officials’ salaries in KRG for almost 2,5 years. Either the salaries are not paid or a quarter or half of them are paid. This causes a serious problem for all the people in KRG. On the other hand, KDP loses its political advantages in KRG, especially due to the pressure of Turkey, Iran and Iraqi central government and it is forced to hand over its unjust control to the central government concerning the matters falling within the administrative scope of the central government such as border gates and airports. This lowers its prestige among KDP grassroots and people realize further that the false promises that Barzani makes to the grassroots are not even imaginable.

On the other hand, PUK is under heavier pressure than KDP. While it is seen that the fight for leadership causes serious problems in PUK after Jalal Talabani’s term, a more holistic structure that opposition movements have had especially in Sulaymaniyah restricts the influence and control of PUK in Sulaymaniyah. A coalition called Coalition for Democracy and Justice was established and it attracted a significant number of partisans even though Barham Salihi, one of the strongest leaders of PUK, did not resign from the party. On the other hand, Gorran and Kurdistan Islamic Community (Komal) strengthened their cooperation. Barham Salihi also joined this cooperation and decided to run for the elections on 12 May 2018 in Iraq with a joint list. This enhanced the unity between Sulaymaniyah-based movements acting against PUK and was seen as a move which would put PUK in a seriously difficult situation. Kurdish grassroots were more antipathetic to PUK notably since it withdrew its peshmerga in Kirkuk process. Even disintegration started in PUK. For example, 5 out of 13 PUK members in Sulaymaniyah Provincial Council separated to form an independent group. It is even said that some peshmerga separated from PUK and became a KDP member. In this sense, it is seen that the partnership between PUK and Iraqi central government has not yielded the results that PUK expected.

From this viewpoint, it is possible to say that KDP and PUK need to reunite their powers as the driving parties of Kurdish political movement. PUK might lose partisans and votes in the following period due to the internal leadership problems of PUK and the opposition movement in Sulaymaniyah. KDP also needs support so that it will not be harmed further or it will be able to maintain its position. Although KDP seems to control its grassroots and have a fixed level of voters, ongoing financial problems and rising opposition movement are likely to affect KDP as well.

However, it should be considered that PUK may have made a new plan although it is perceived that a new alliance is set again between KDP and PUK. Despite the seemingly problematic structure of PUK, it should be noted that PUK plans to seize power in KRG as a result of the pressure put on KDP in coordination with Iraqi central government. Not only did KDP lose but PUK was also damaged by the operation of Iraqi central government in Kirkuk and other disputed regions. Therefore, PUK which is still led by Talabani family may enter a process of recovery again after the congress to be held in March 2018. In such case, PUK may want to balance the influence of KDP or weaken it in KRG, with the support of Iraqi central government. This might completely change the political structure and balances in KRG. Having regard to the relations between PUK and Iran, a situation which will increase Iranian influence in KRG, as in the rest of Iraq, might arise. Therefore, it would not be wrong to say that Iraqi elections planned to be held on 12 May 2018 will be directly related to the situation in KRG. If the groups led by al-Hashd al-Shaabi leaders such as Nouri al-Maliki or Hadi al-Amiri who seem to have a closer position to Iran succeed in these elections again, Iranian influence will increase in the region. It should be kept in mind that Iran, which has faced problems in its territory, may focus its attention on the operations and developments outside.